There are just a few days left of 2019 so I thought it was a good time to share the things I’ve loved in December. December is a funny month, isn’t it? Some people love it. Some people hate it. I used to be one who loved it, but after losing our beautiful cat, Milo last December, there is now somewhat of a grey cloud hanging over this month. It’s important to find moments of enjoyment no matter how small or simple. Here are a few things I’ve loved in December.

I usually love the build-up to Christmas. This year not so much. I’ve found it really hard to get festive. My friend Ross (A Life On Wheels) even gave me the nickname ‘SimplyScrooge’. Thanks Ross (haha). So to try and get into the spirit of things, I enjoyed some Christmas related outings. There was Christmas tree shopping at The Lodge in Aberfoyle, watching Home Alone at the drive-in movie in Glasgow and Christmas at the Botanics in Edinburgh. All three of these events were with my nephew who thoroughly enjoyed them all, which was the main thing. I even got to get up close to a waterfall while in the forest in Aberfoyle. 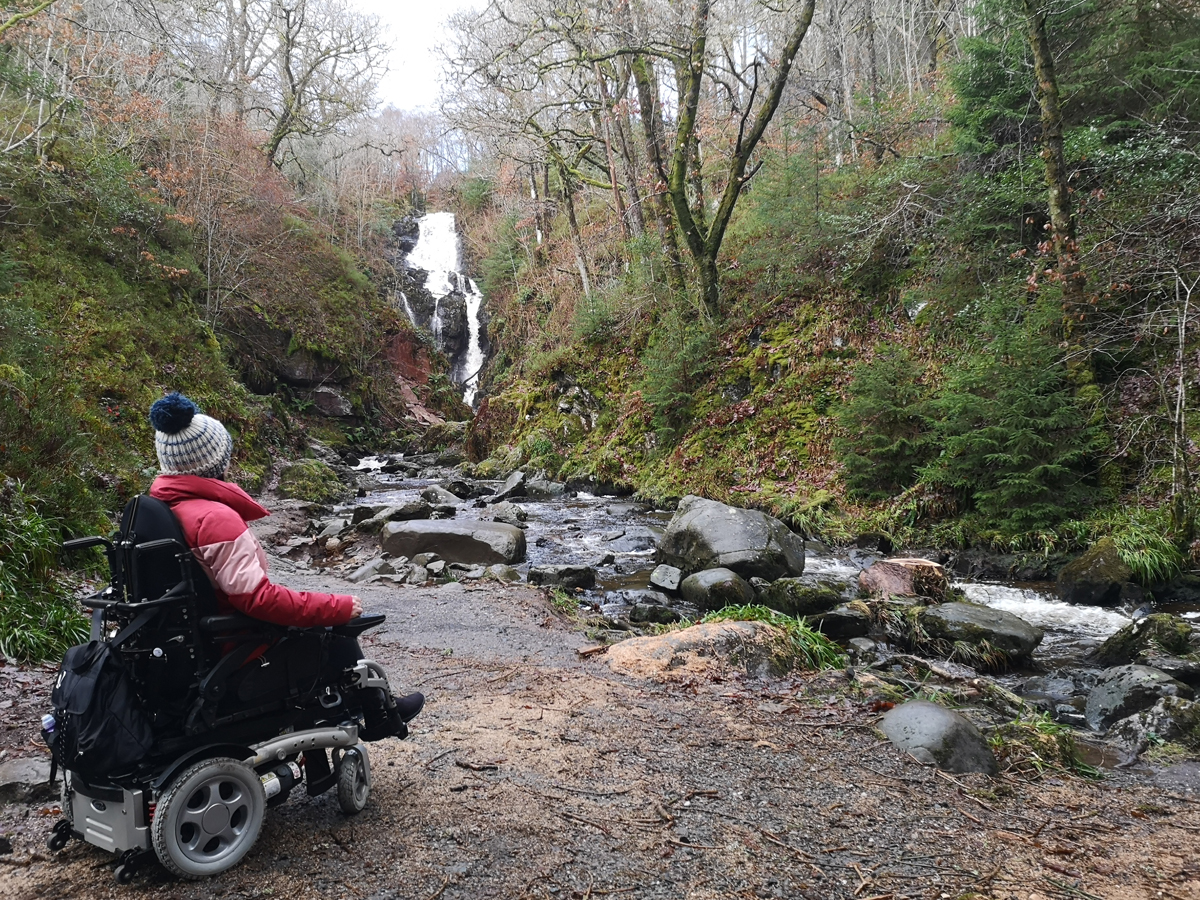 You might enjoy these:
A Christmas Day Out With Emma
Christmas At The Botanics In A Wheelchair

There have been new music discoveries this month which I’ve been loving. They have been on repeat all month long.

A R I Z O N A– this American band was actually discovered by Allan, but we have both been loving their stuff so much. The first song we heard was ‘Problems’ which is awesome. There is also a brilliant acoustic version you have to check out. Other favourites are ‘Nostalgic’, and ‘Freaking Out’. We are waiting for them to announce a UK tour. Hopefully, that will happen soon. Listen to A R I Z O N A HERE.

Lilla Vargen – Lilla was a random YouTube discovery. Some of my absolute favourite bands and singers have been found because they randomly came on after I was listening to something else. The first song I heard of Lilla was ‘Believe Me’. It is a beautiful song and I can’t get enough of it. I explored more of her songs and was delighted to find out she was the support act for the Dermot Kennedy gigs we were going to in Edinburgh and Manchester this month. It was amazing to be able to see her live so soon after discovering her music. She was incredible live and very talented. Listen to Lilla Vargen HERE.

LANY – I have known of this American band for a long time, but had never really taken much notice until now. Well, I think I have fallen in love. Their song ‘Malibu Nights’ randomly played on YouTube one day this month and as soon as it began playing, I loved it. I love the structure, the way it builds and the way it makes me feel. I’ve since been binging on the rest of their music and so far I’m also loving ‘Thick & Thin’ and so many others. You know how much we love going to gigs, so I had a look to see if LANY were coming to the UK. I can’t believe we have just missed them. They were playing in the amazing Albert Hall Manchester and SWG3 Glasgow. Typical.

Last month we had been loving the true crime documentaries on HayU. This month we fancied some easy watching so when we stumbled across Virgin River on Netflix one night we decided to give it a try. We weren’t sure what to expect, but the description sounded good. It’s a 10-episode romance drama series centred around a nurse practitioner from LA who moves to the small town of Virgin River in California for a fresh start. The location is beautiful, the characters are likeable with different storylines playing out. It is calming to watch and extremely bingeable. We’ve already completed season 1, but I’m excited that season 2 has been confirmed. Give it a try if you haven’t already.

I love makeup, but I find the application tiring and a bit of chore. My arms are incredibly weak and as a result, I’ve developed a way of supporting my arms/hands and a technique to apply my make up. When I see things that may make it easier for me then I’m all for giving it a go. Electric makeup brushes were one of those things I had seen online and instantly thought could help. I was gifted the Magnitone BlendUp Vibra-Sonic Makeup Blending Brush and have really enjoyed applying my makeup with it. I have three different heads for the brush which are for powder, liquid foundation, contouring etc.

The brush has two speed settings, but I usually keep it on the lowest setting. I’m not much of a liquid foundation gal, so the brush for powder/mineral foundation is te one I’ve been using. The brush has a little bit of weight to it, which at first I found tricky to hold. However, I soon worked out the best way for me to hold and operate it so it has now been working really well for me. I’m definitely not as tired after doing my makeup as the brush is doing most of the work of buffing the mineral foundation into my face. With mineral foundation, the key really is in the buffing. Buff buff buff and buff some more. The Magnitone BlendUp Vibra-Sonic Makeup Blending Brush is cordless and has USB charging.

We have watched a few good movies this month. None that fully stood out though. Although, we did watch ‘Planes, Trains and Automobiles’ for the millionth time last week. It’s a classic and John Candy is in it, so what’s not to love about it? It’s one of our favourites of all time. Then last night we stumbled across ‘The Informer’ with Joel Kinnaman and Rosamund Pike. It is about an ex-con and former special operations soldier who is recruited by the FBI to take down a New York crime boss. He lands himself in prison to work for the crime boss while inside, but things don’t go quite work out so he needs to plan an escape to save himself and his family. It was a really good movie and it kept us hooked throughout.

We had two great gigs this month. Both Dermot Kennedy but at two different venues. The first one was at the Usher Hall in Edinburgh and the second was at O2 Apollo Manchester. We have been to both venues before, so we weren’t overly concerned about accessibility. The Usher Hall was the best, hands down. Access in and around the venue was great. The cherry on top was the AMAZING view from our seats in the balcony. There will be a full review of The Usher Hall coming soon. I know I say this every time I go to a Dermot Kennedy show, but honestly, it’s true, he is absolutely incredible. Please go and see him if you get a chance.

What have you enjoyed the most about December? What are your plans for January?

You May Also Enjoy