Getting to O2 Apollo Manchester

We were staying at Holiday Inn Manchester City Centre which is about five minutes away. This was our first time at this venue so we weren’t sure about parking. The hotel staff offered to book us a taxi, but we decided to take our car instead.

Before heading over to the venue I checked the O2 Apollo Manchester website for details on parking. To our surprise, it stated there was disabled parking at the venue. Great!

We didn’t have to worry about finding somewhere to park. Or at least that’s what we thought. 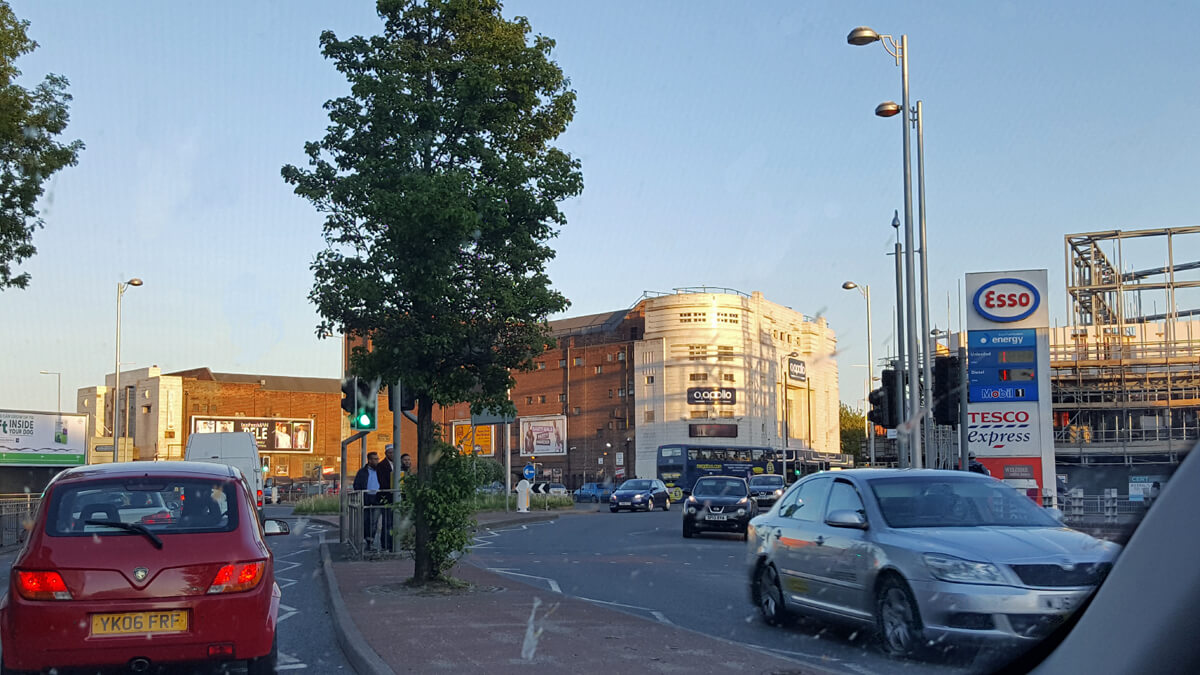 As we approached the venue we could clearly see a steward standing at the car park entrance. We explained we had a blue badge and he advised us to drive through at a cost of £7. We should have known it was too good to be true.

Unfortunately, we didn’t have any cash on us to pay for the parking, and to be honest even if we did, I don’t think we would have paid it. We decided to find a space on the street instead.

It was really busy, but thankfully we found a random space on Marshall Street which was only about a two-minute walk from the venue.

The venue’s website does not mention anything about a parking fee, which is very annoying and misleading. It would be helpful if they could mention on the website that blue badge holders can use the car park but that it will cost. Not everyone carries cash on them nowadays so having this noted on the website will prevent a lot of confusion.

Update from January 2020: The O2 Apollo Manchester website now has the cost of parking. Priced at £7.00, cash only and issued on a first come, first served basis.

As with all O2 venues I’ve been to it’s always really easy to book accessible tickets. They are probably one of the easiest venues to book tickets for in my own personal experience.

Most O2 venues don’t even require you to call an accessible ticket line. It’s just a case of simply booking one standard ticket online and then emailing the venue with your access requirements, access card/proof of disability and request for a free PA/carer ticket. It’s so quick and easy. 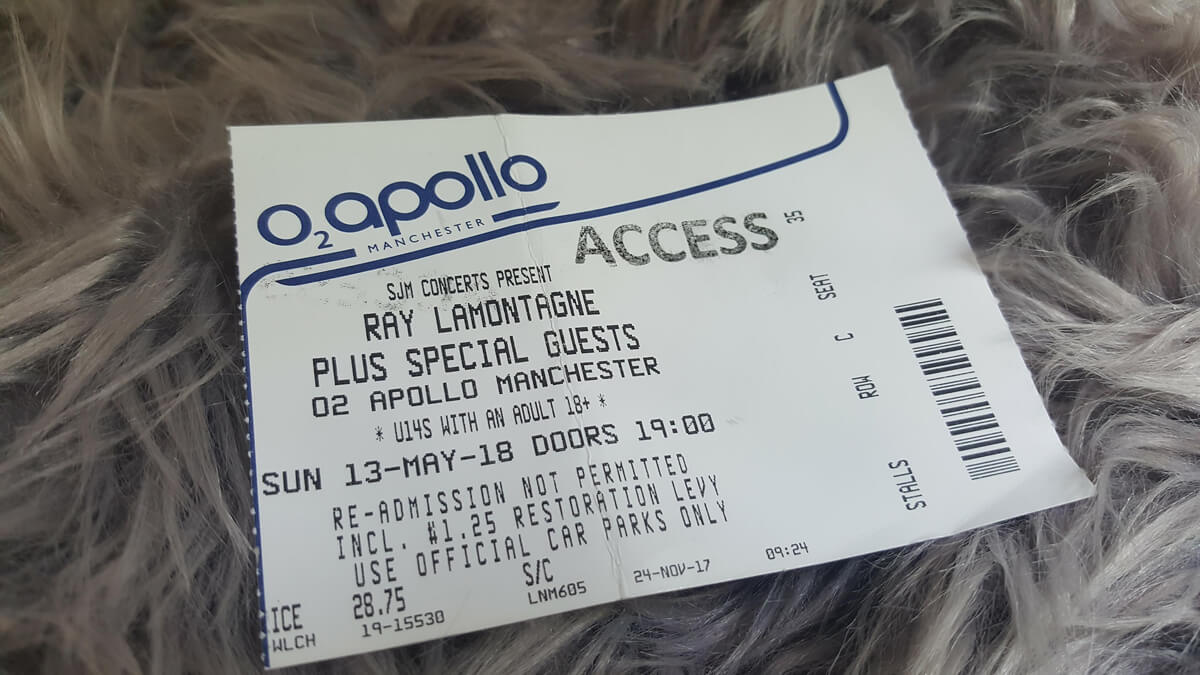 However, O2 Apollo Manchester website didn’t mention this. It had a contact number which I called and easily booked my ticket. I was then told to email the venue with a copy of my access card and request a free PA/carer ticket.

I sent this off quickly, but a week later I still hadn’t received a reply so I emailed again. After the second email, someone from the venue replied that my request had been received and that my tickets would be sent out soon.

As I mentioned earlier we parked about a two-minute walk from the venue on Marshall street. It was double yellow lines, so we made sure to display our blue badge as well as the clock showing our arrival time.

In England, you must display the clock if parking on yellow lines and you can only park for three hours. We knew we’d be out within three hours so it wasn’t going to be a problem. 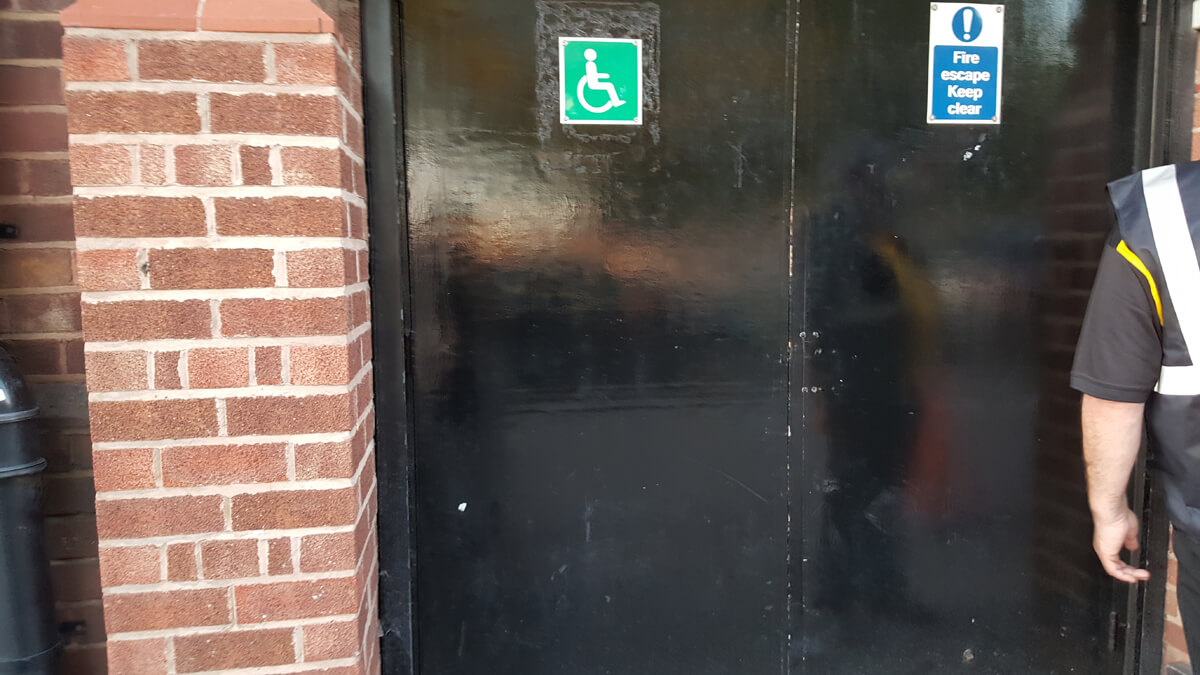 A steward saw us straight away and came over to us. He explained that there is an accessible side entrance which he took us around to and waited for another steward to open the doors.

We were then escorted through and to our accessible seats. It was a fairly short distance and all on the flat. It was a pretty smooth arrival and the stewards were great.

Our accessible seats were right at the front of the stage because it was a seated show. Had it been a standing show then we would have been seated at the back on the viewing platform.

It was great to be at the front and so close to the stage to see Ray, but I do have a negative. Wheelchair users are positioned in the front row with carers/companions seated behind. I really don’t like this set-up at all.

For the entire night, I wasn’t able to see Allan because he was sitting behind me. This makes me feel quite uncomfortable sitting on my own and I feel like I’m at the gig by myself.

One of the things I love about going to gigs is enjoying the music and experience with the people I’m with and being able to fully interact with them. I didn’t have the opportunity to experience this at O2 Apollo Manchester. 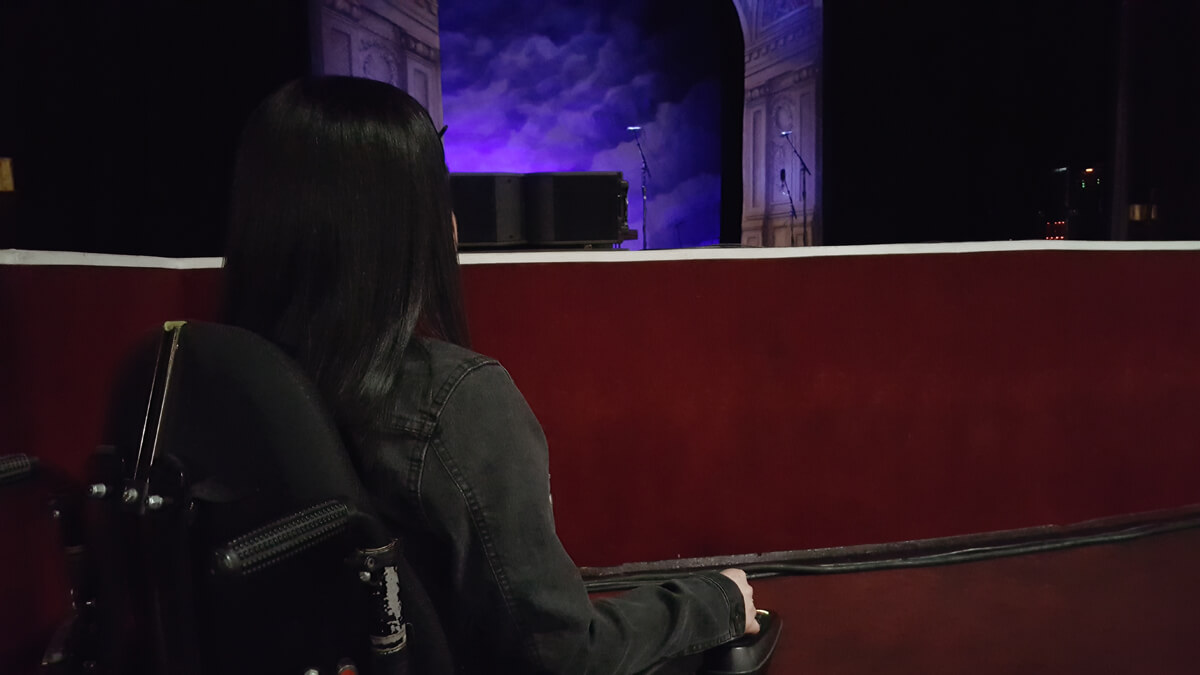 The steward escorting us to our seats was really nice and was within sight the entire night. Although he didn’t explain where the accessible toilets were when showing us to our seats, so at the end of the gig we asked where it was. 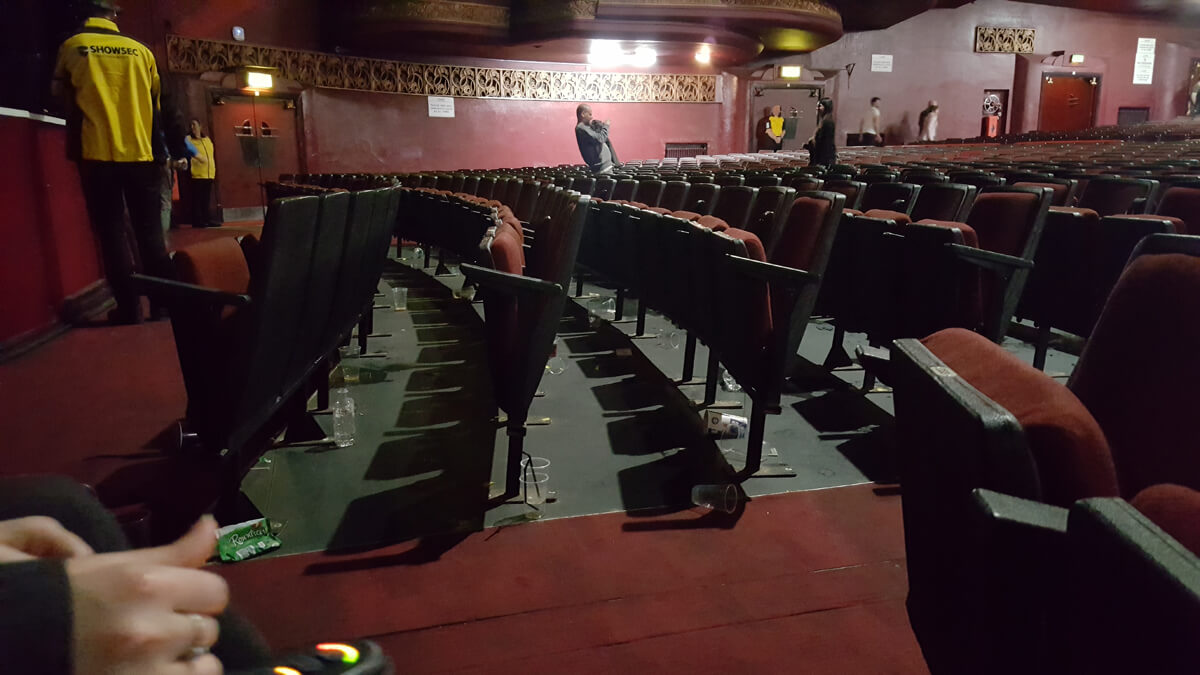 The accessible toilet is at the back of the room, but unfortunately, there was a queue of other wheelchair users wanting to use it so we decided to wait until we got back to the hotel. I was disappointed not to get a peek inside, but I managed to ask the venue for a photo (see below).

This was my first time seeing Ray LaMontagne live and Allan’s third. Allan has been a big fan of Ray for many years so when we saw that he was coming back to the UK after eight years away, he was adamant he wanted to go to as many of his shows as possible. So we ended up booking tickets for Glasgow and Manchester. What can I say? We are dedicated!

If you haven’t heard of Ray LaMontagne he is a singer-songwriter from America. His most well-known songs are Trouble, Burn and Jolene, but really there is way too many to list. As well as being a fantastic singer-songwriter with the most dreamy vocals, Ray also plays guitar, piano and harmonica beautifully. 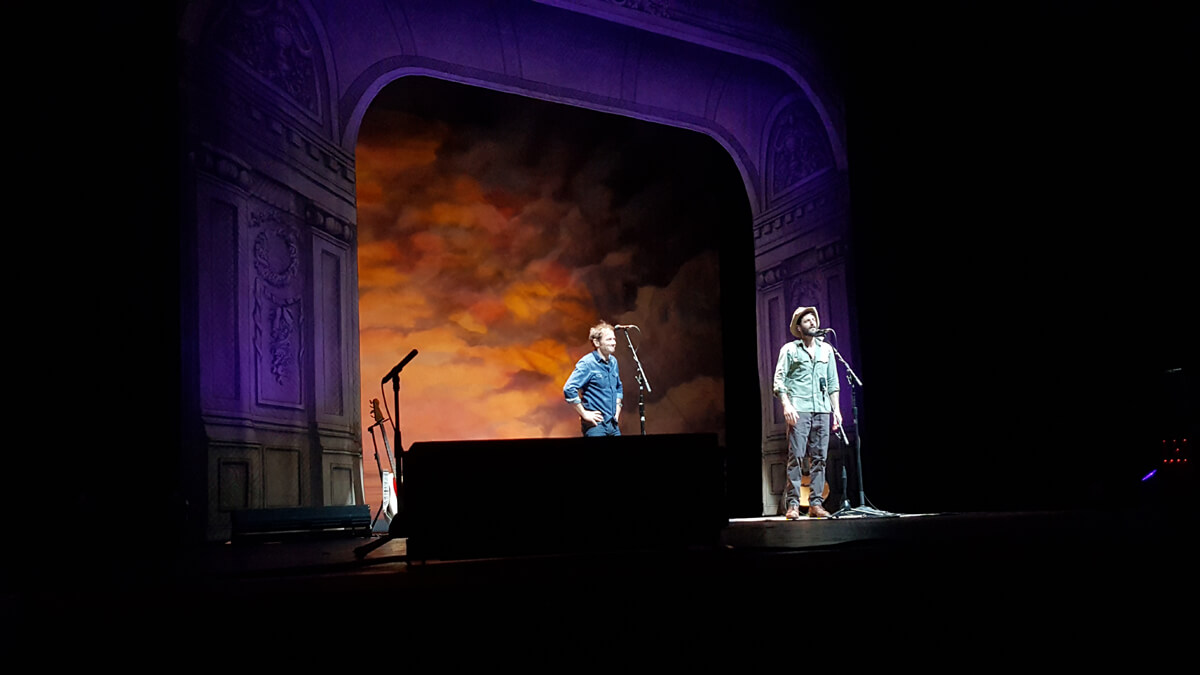 Ray opened the show with a slow number, which some would believe to be unusual for an opening track, but for Ray and his fans, this was a perfect choice.

The entire room was silent, almost like we were all in a trance as we listened and watched Ray do his thing on stage.

Being such a quiet man, Ray didn’t say too much throughout the night, but when he did, the crowd listened intently as he explained the meanings behind some of the songs.

What made the show even more special was its stripped back acoustic set-up. It was only Ray and John Stirratt, who is the bassist of the band Wilco.

Despite not being able to sit beside or even see Allan during the gig, my overall experience as a wheelchair user at O2 Apollo Manchester was very good. Would I go back to O2 Apollo Manchester? Yes, I probably would. As I mentioned earlier I’m interested to try the viewing platform at the back during a standing show to see what that is like for access.

Ray LaMontagne was absolutely brilliant and seeing him in Manchester made us all the more excited for his Glasgow show the following night.

Have you been to the O2 Apollo Manchester? What was your experience?

More on this topic…