Back in October my Mum and I set sail across the North Sea on NorthLink Ferries MV Hrossey. The trip was with a few of my fellow Euan’s Guide Ambassadors and took us on a journey from Aberdeen to Lerwick in the Shetland Islands. Both my mum and I had never been to Shetland before so we jumped at the chance when invited by the amazing guys at Euan’s Guide. With my Euan’s Guide Ambassador hat proudly on, we embarked on a trip to explore the accessibility of NorthLink and Lerwick over a weekend.

After a 3 hour drive, we finally arrived in Aberdeen. We checked-in at the Aberdeen Ferry Terminal and within minutes we were making our way up the lift and along the gangway which connects to the Ferry. 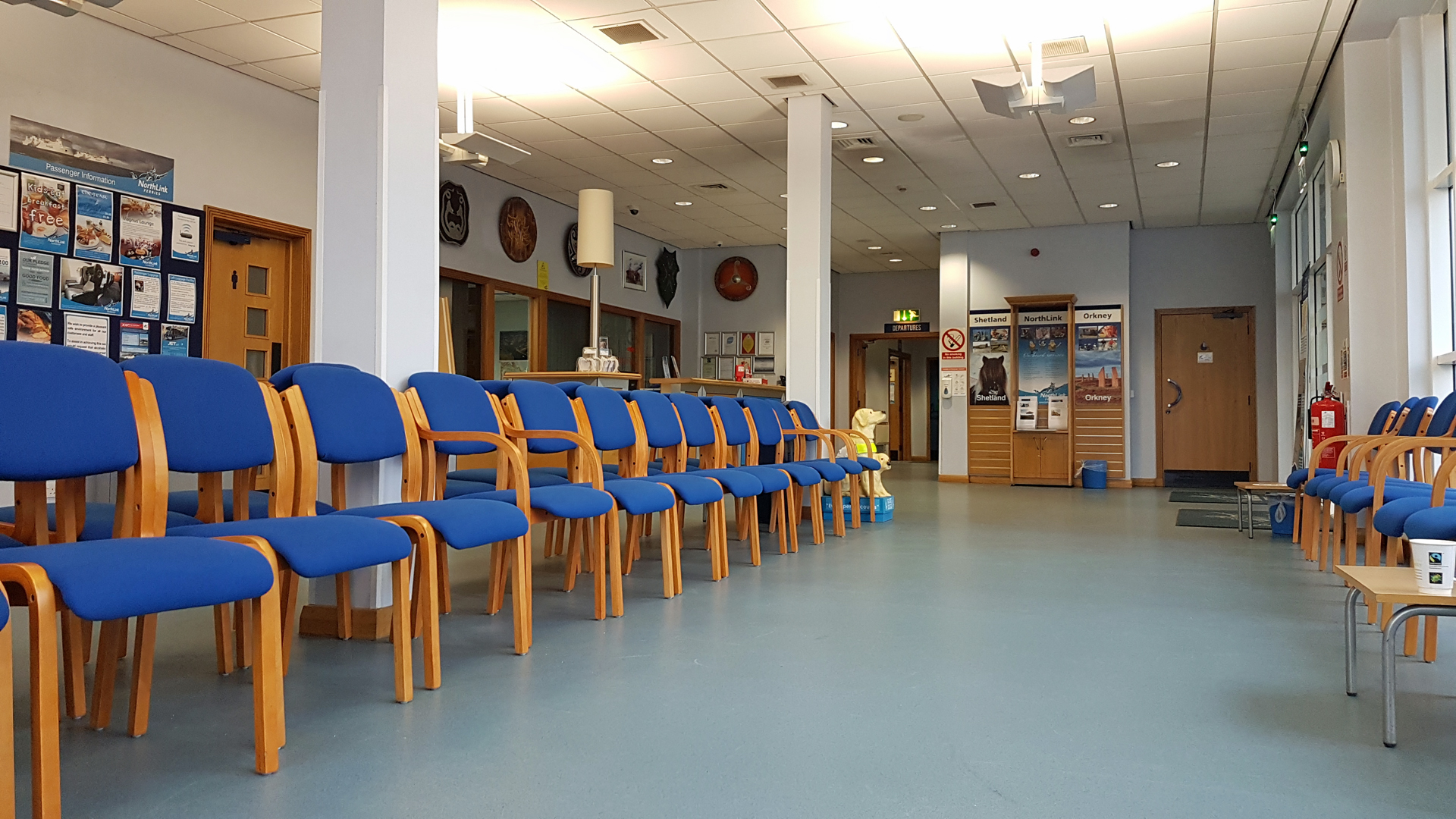 There was no one else on the gangway with my mum and I so we didn’t feel pressured to keep moving and could easily take our time. We stopped a few times and took some photos through the gangway glass. Once we reached the entrance we were met and welcomed by a friendly security guard. 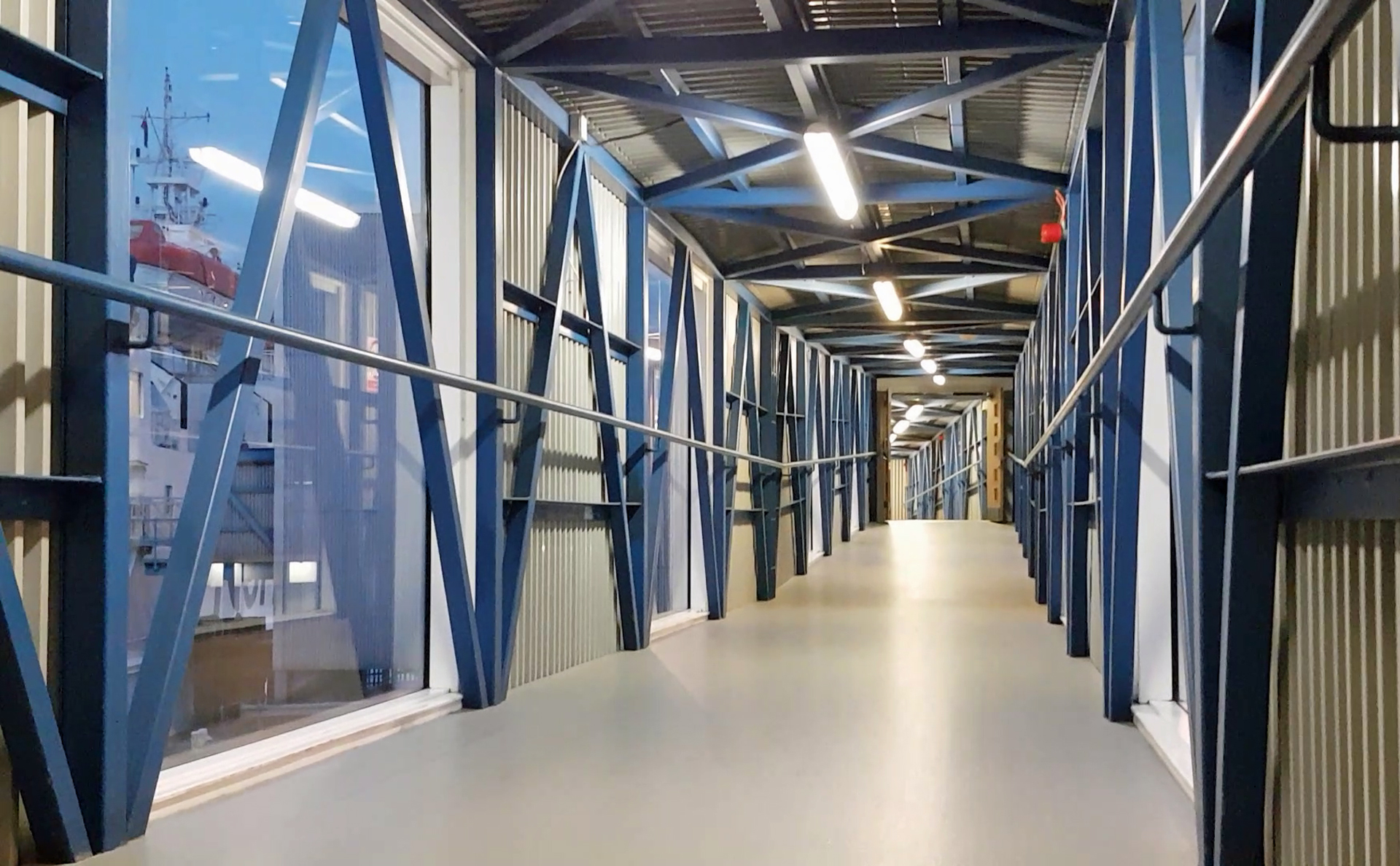 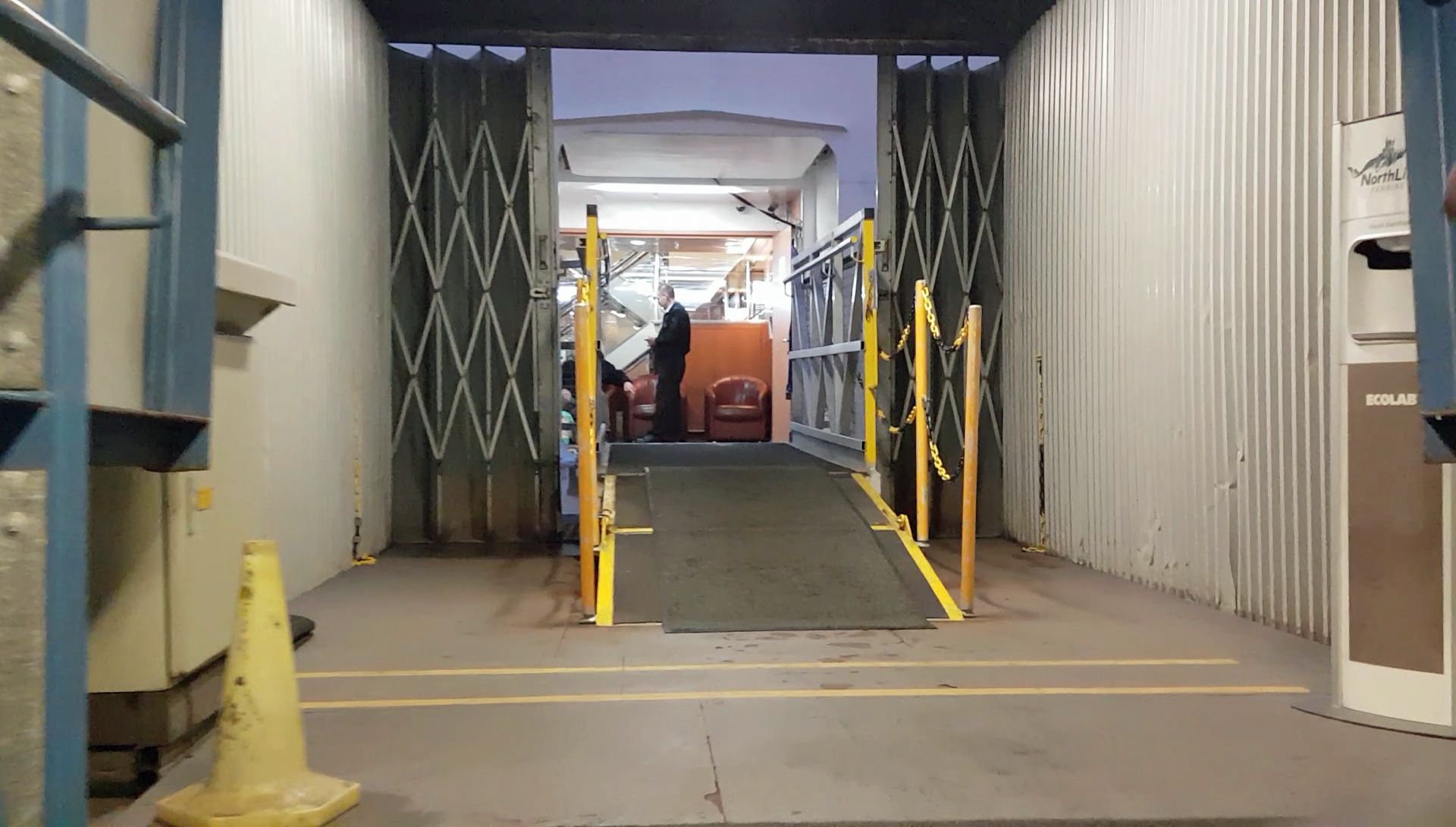 There was a small ramp from the gangway up to the door of the ferry. We couldn’t believe how close our wheelchair accessible cabin was to the entrance. I reckon it was less than 10 feet, which was amazing and very handy if you have difficulty walking too far.

The ships purser immediately greeted us as we approached our cabin and offered to help us with our bags. He kindly offered to explain how the ceiling hoist and our cabin room’s automatic door opening system worked. I really liked how helpful he was to my Mum and I. As the reception was very close to our cabin, he explained that if we needed anything at all to use our cabins telephone or go and see him directly at reception. 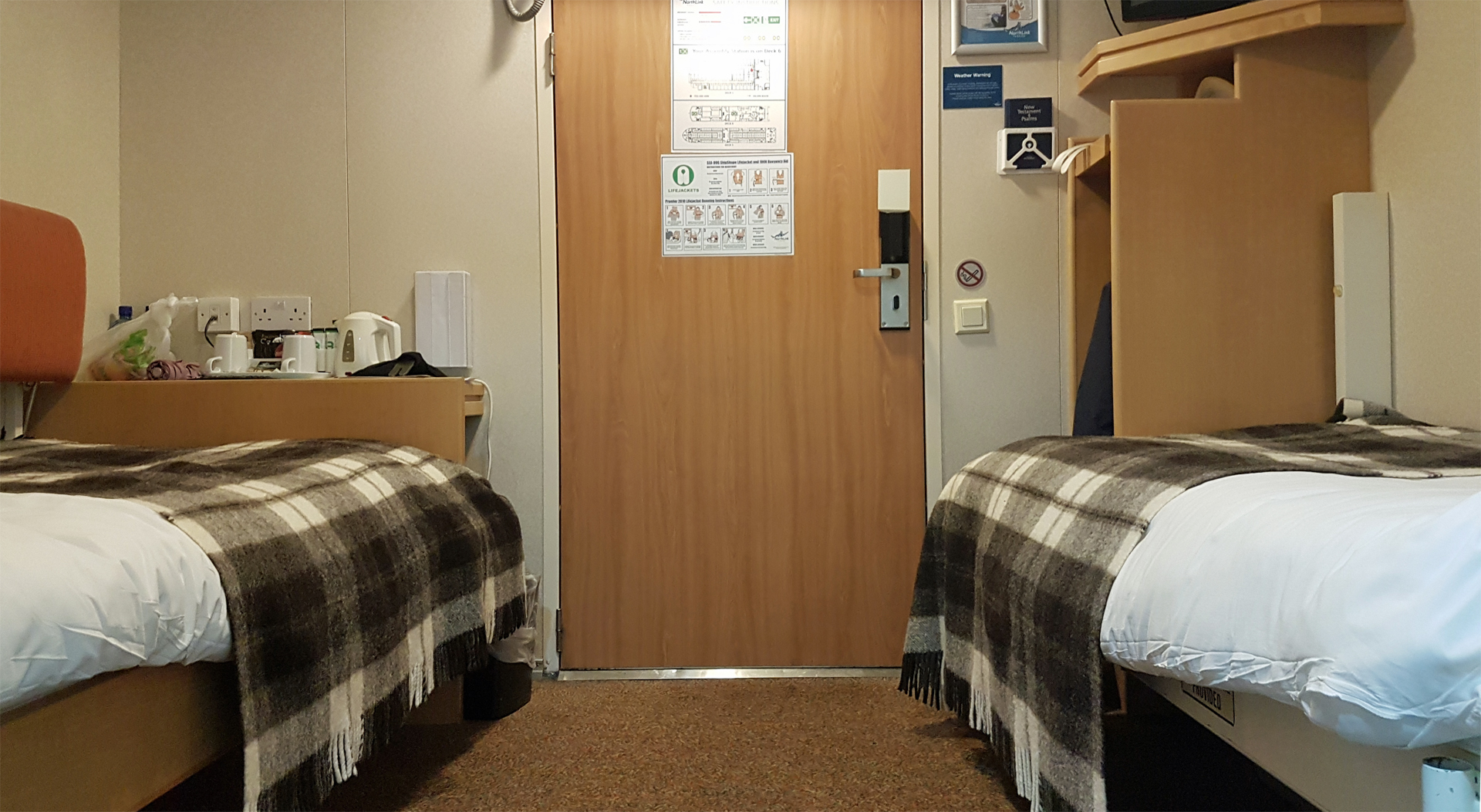 The twin beds were very comfortable, so much so that I wasn’t sore at all. There was a bed rail that we attached to prevent me falling out of bed due to the rough weather. The ceiling track hoist ran across both beds so you can choose whatever bed you want to sleep in. 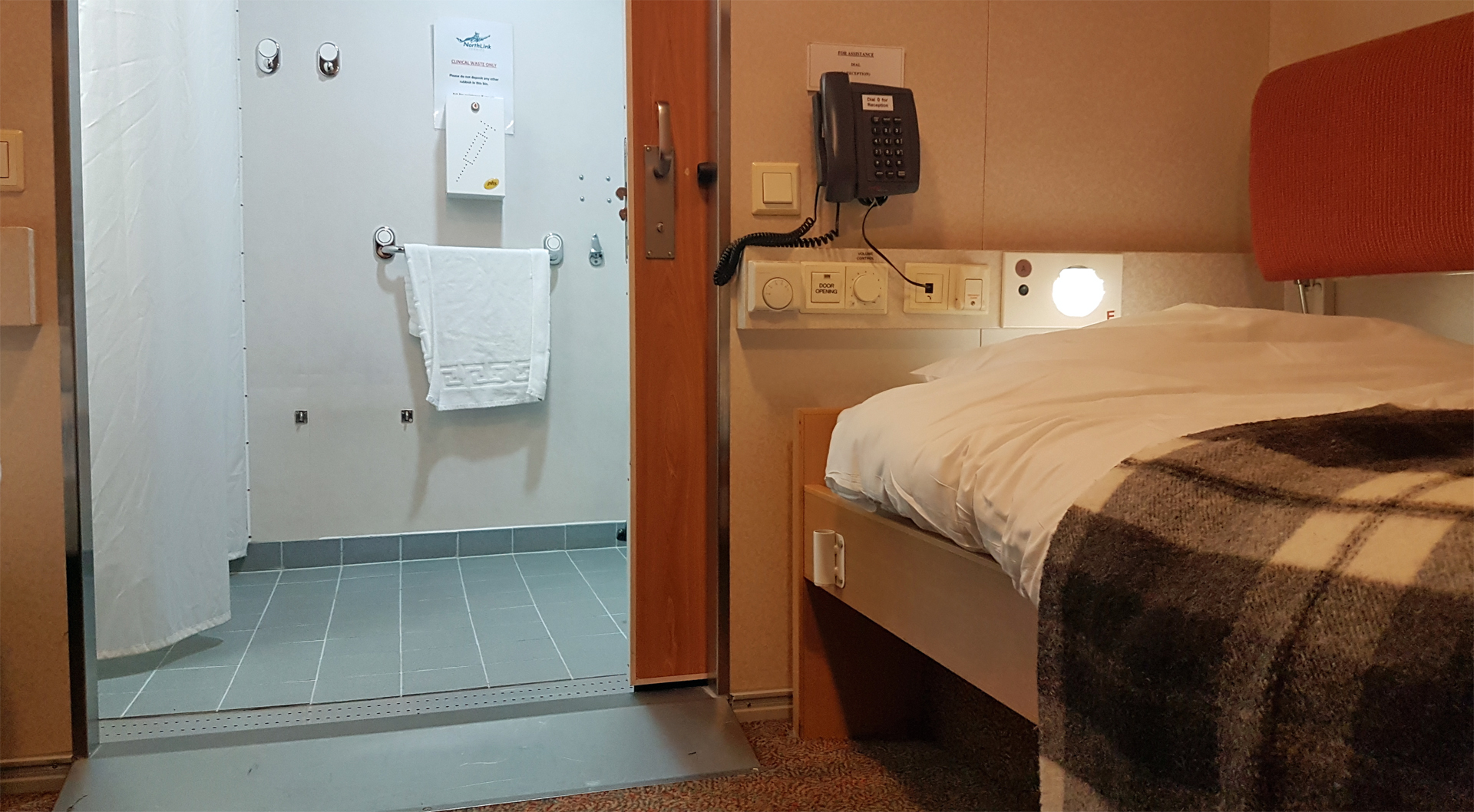 There was a light switch, door opening button, room temperature control and telephone at the head of the bed. This was handy and very accessible. At the foot of my bed, there was the TV which had a range of free movies as well as standard channels. The foot of my Mum’s bed was the tea/coffee making area. 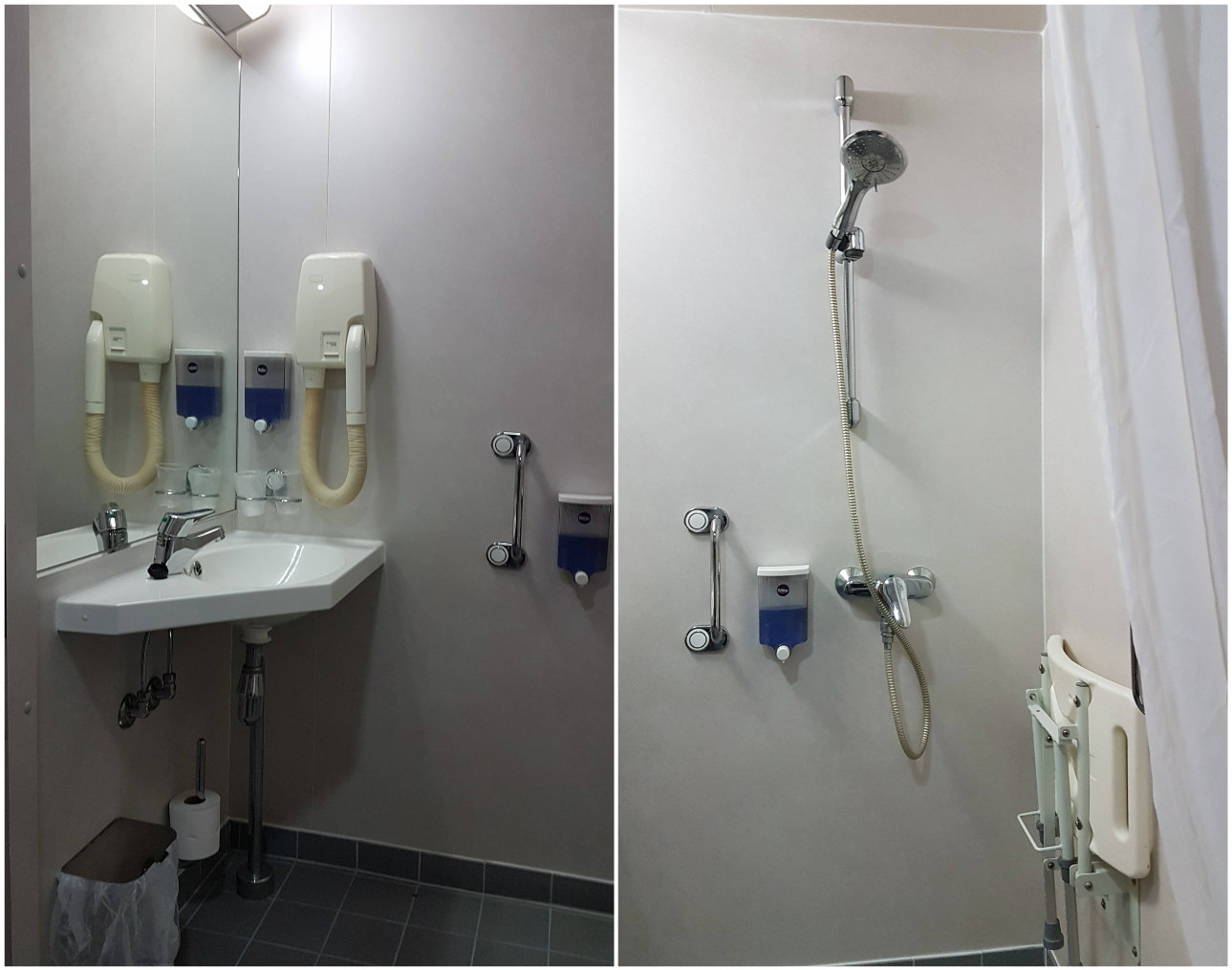 The bathroom in our accessible cabin had a roll-in shower with a wall mounted seat. The water controls, handheld shower head, shower gel and grab bar were within reach. The sink was small, but I managed to access it by removing my footplates. A pipe connecting the sink to the floor and a toilet roll holder under the sink prevented me from properly rolling underneath. There was also a hairdryer located next to the sink, which saves you having to take your own. 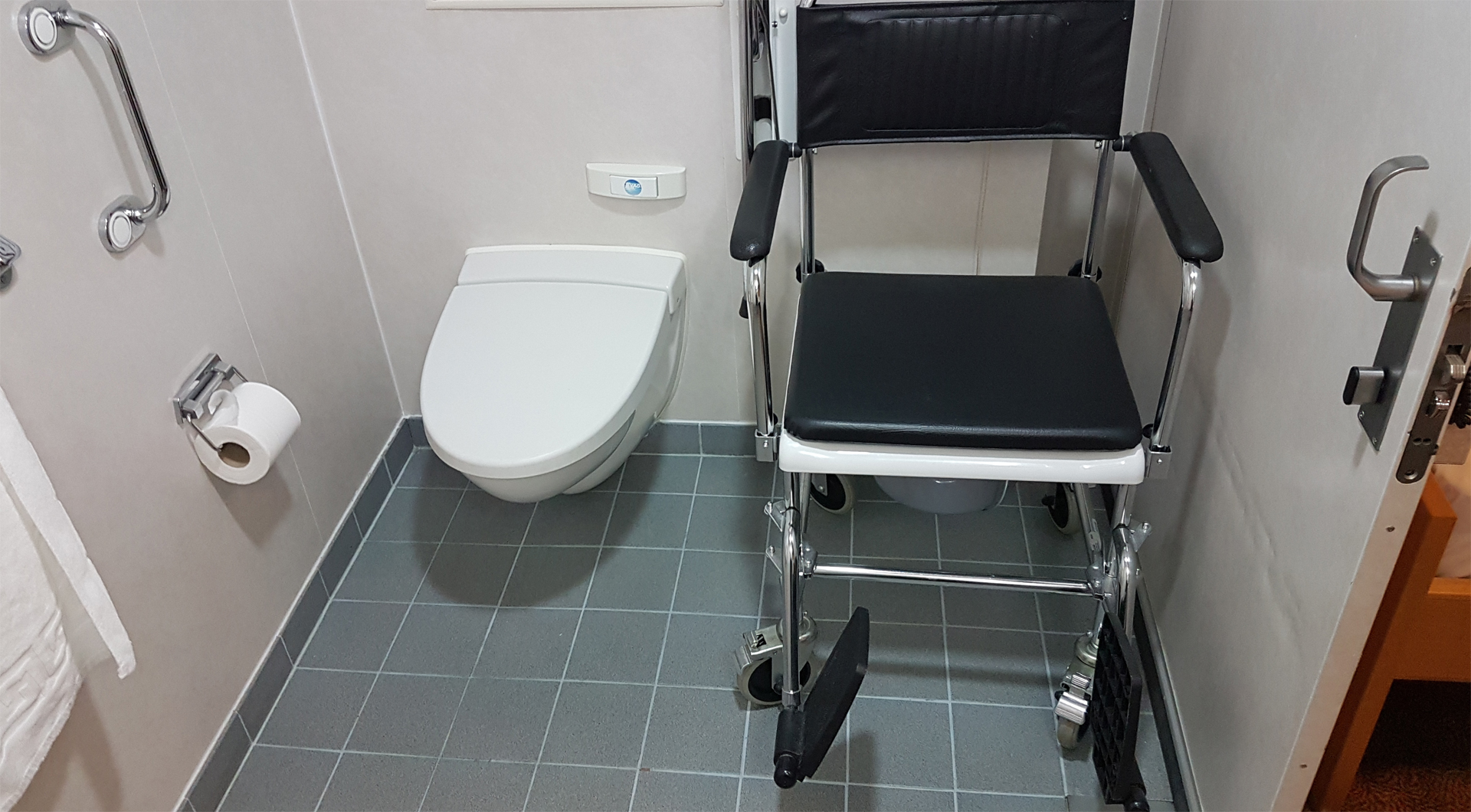 The toilet was positioned in the corner with space on one side for wheelchair transfers. There was a pull-down and fixed grab bar on each side of the toilet. The toilet flush and toilet roll were positioned low down making it easier to reach. The shower commode chair was already in the bathroom so we didn’t have to request this.

It’s fantastic that the accessible cabins have a ceiling track hoist. As I mentioned earlier my Mum suffered from awful seasickness during our trip due to Storm Brian wrecking havoc in the middle of the North Sea. The ship was constantly rocking back and forth so my Mum wasn’t able to manually transfer me to and from my wheelchair due as it was badly affecting my weak trunk control and poor balance. Not to mention my Mum was struggling to even stand up without being sick. We decided it would be a much safer option for the both of us to use the hoist.

Unfortunately, when we returned to our cabin after dinner the hoist wouldn’t work. In a panic, we spoke to the ships purser who immediately came to our cabin and tried to see if he could fix it. Nothing happened. It was dead. He went to get the second hoist and put our one on charge. The second hoist wouldn’t work either. We couldn’t believe it. We had no way of getting me to the toilet and into bed.

The hoist was left on charge for a little while, but it still wouldn’t work. My Mum was feeling terrible that she wasn’t able to help me and I felt terrible seeing her suffer. It made me feel even more vulnerable and reliant on someone. We waited and waited for hours until I couldn’t wait any longer. Somehow we managed without the hoist, but instead of taking the usual 10 minutes, it took us four hours to get me to the toilet and into bed.

I’m not quite sure what was wrong with the two hoists during our stay. I’ve been advised that checks have now been put in place to prevent any more problems arising.

We had access to the Magnus lounge where we enjoyed a 3-course meal on both nights and breakfast. Ryan from Euan’s Guide had recommended that we eat as soon as we get onboard and before the ship properly starts moving. This can help prevent seasickness. The staff were very friendly and accommodating, even making me something that wasn’t on the menu to suit my dietary requirements. Thanks, guys! The tables in the Magnus lounge were accessible especially the large round table where we ate dinner both nights. 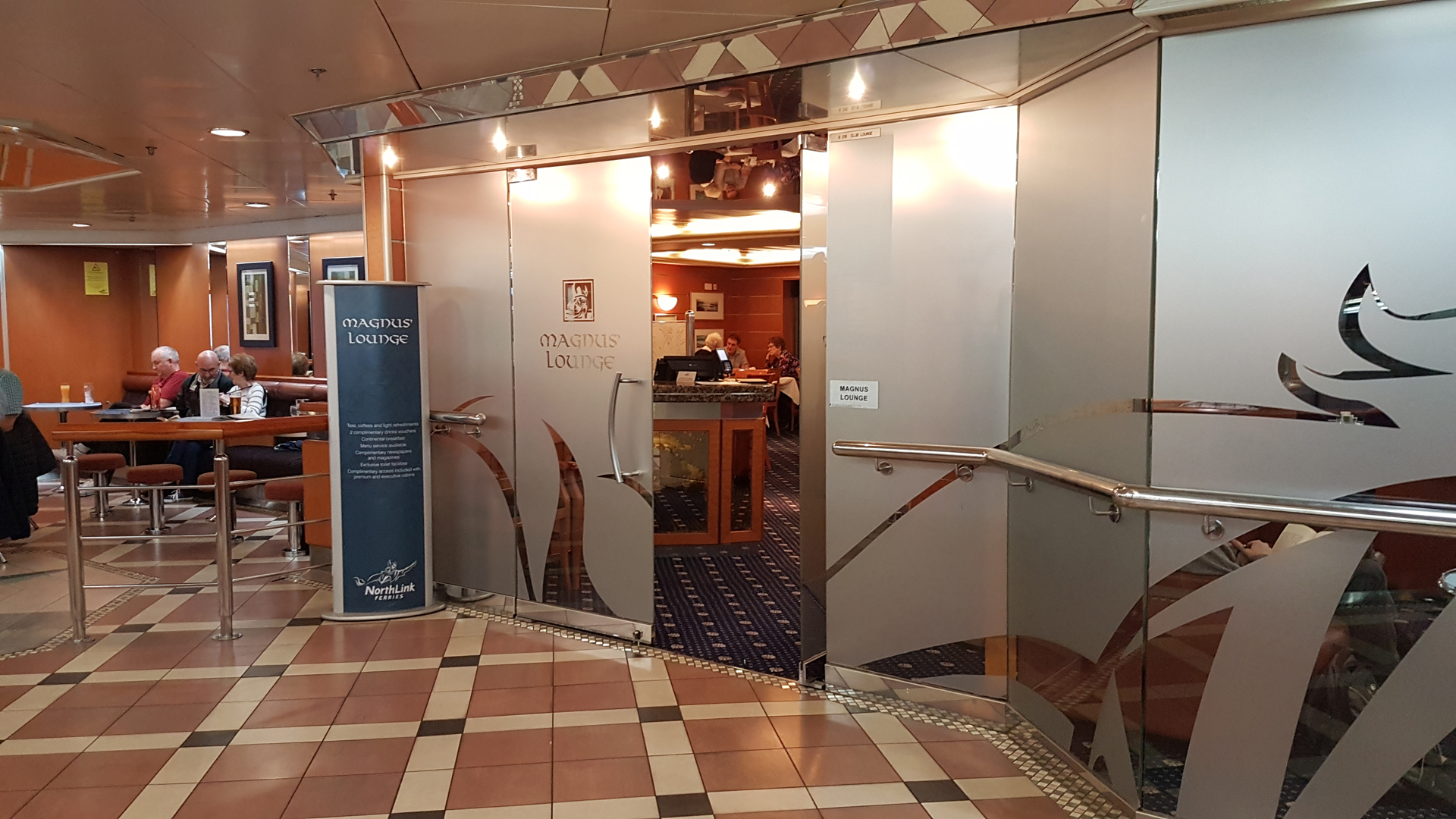 Across from the Magnus Lounge was the bar and restaurant area. My mum and I spent a little bit of time in the bar area on our first night before dinner. There is a large TV here as well. All the tables and chairs are tied down for health and safety reasons in case of bad weather, which we experienced on our trip. The staff were really observant and as soon as they saw me they came across and removed a chair to allow me to sit at the table. 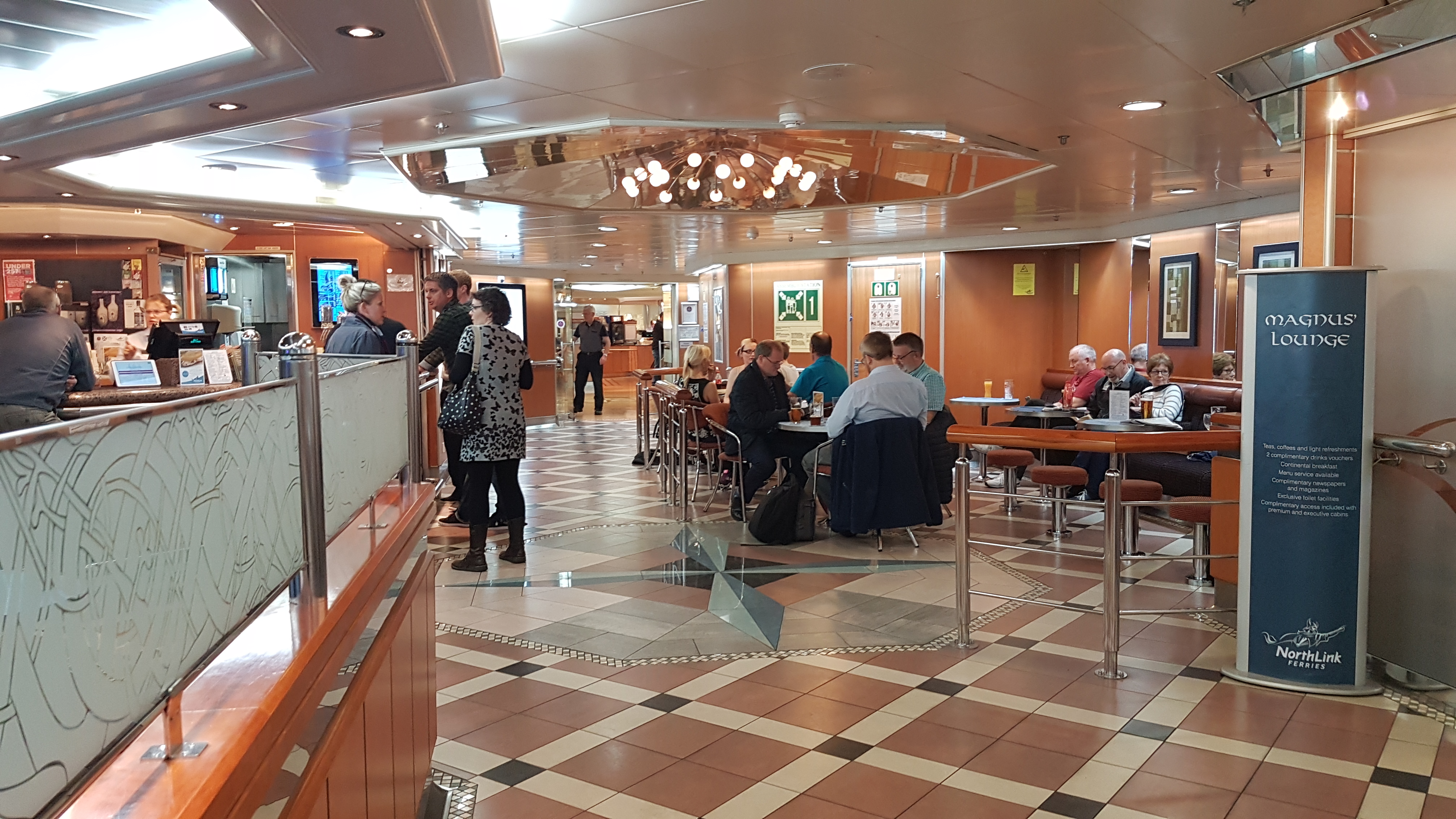 At the other end of the ship, you’ll find the gift shop and cinema as well as the sleeping pods. The gift shop sold all sorts of food, drink, souvenirs, medication and more. As the gift shop is at the very end of the ship it is probably the worst place to be during bad weather and in our case during storm Brian. While in the shop my Mum was unable to walk a number of times because the ship was rocking so much. It was also affecting my ability to control my wheelchair. It was quite funny at the time and was like something out of ‘You’ve Been Framed’. If only someone had filmed us trying to move around the shop and make it back to our cabin. Sorry Mum for making you take me to the gift shop and ultimately creating the bad sea sickness you suffered as a result. 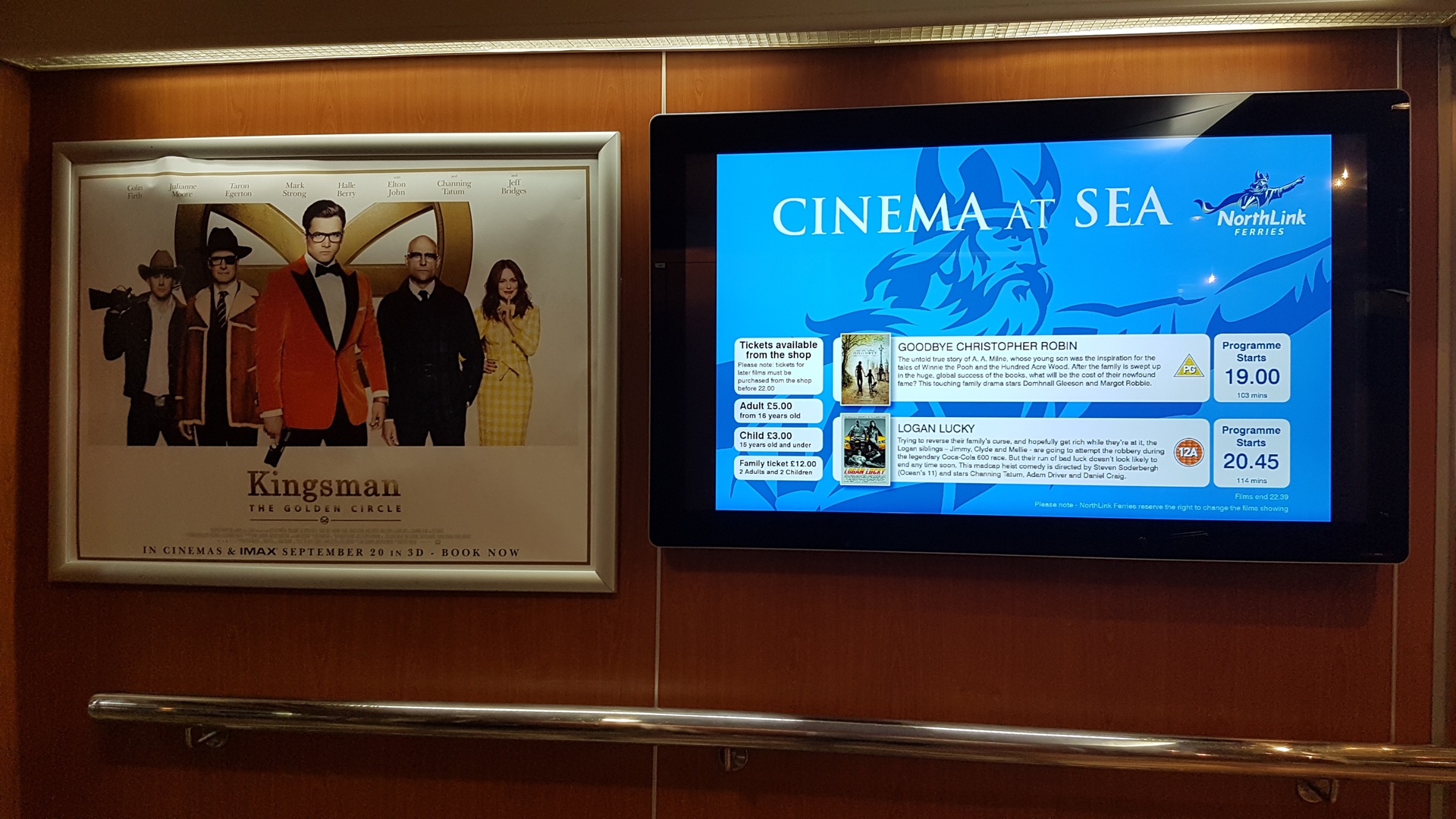 After the ferry had docked and we had breakfast on the Saturday morning my Mum and I set off for a day of exploring Lerwick. Unfortunately, due to the time of year and bad weather, there wasn’t much open. It was really cold so we headed for the Shetland Museum and Archives for a look around and something to eat and drink in the restaurant. 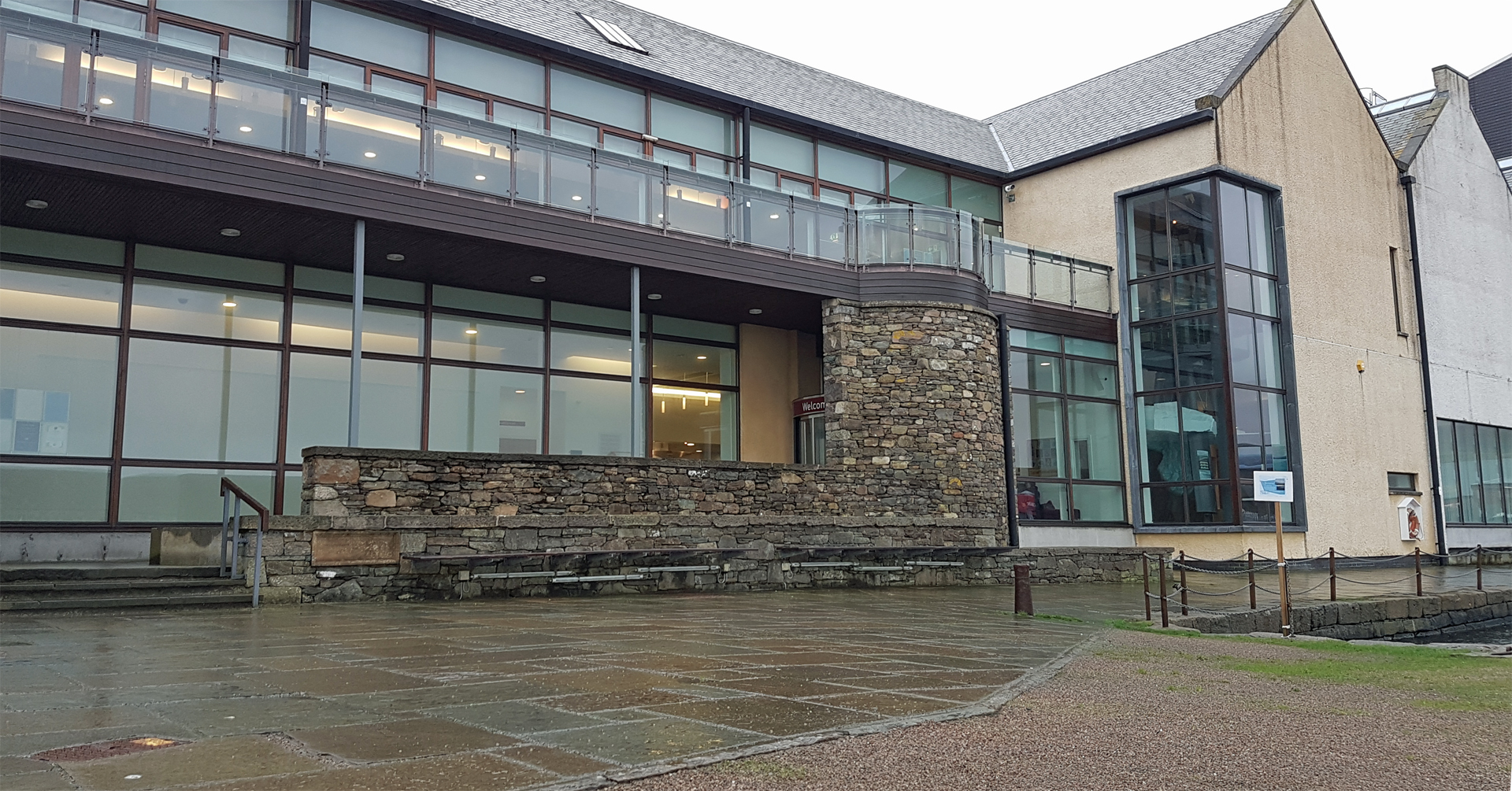 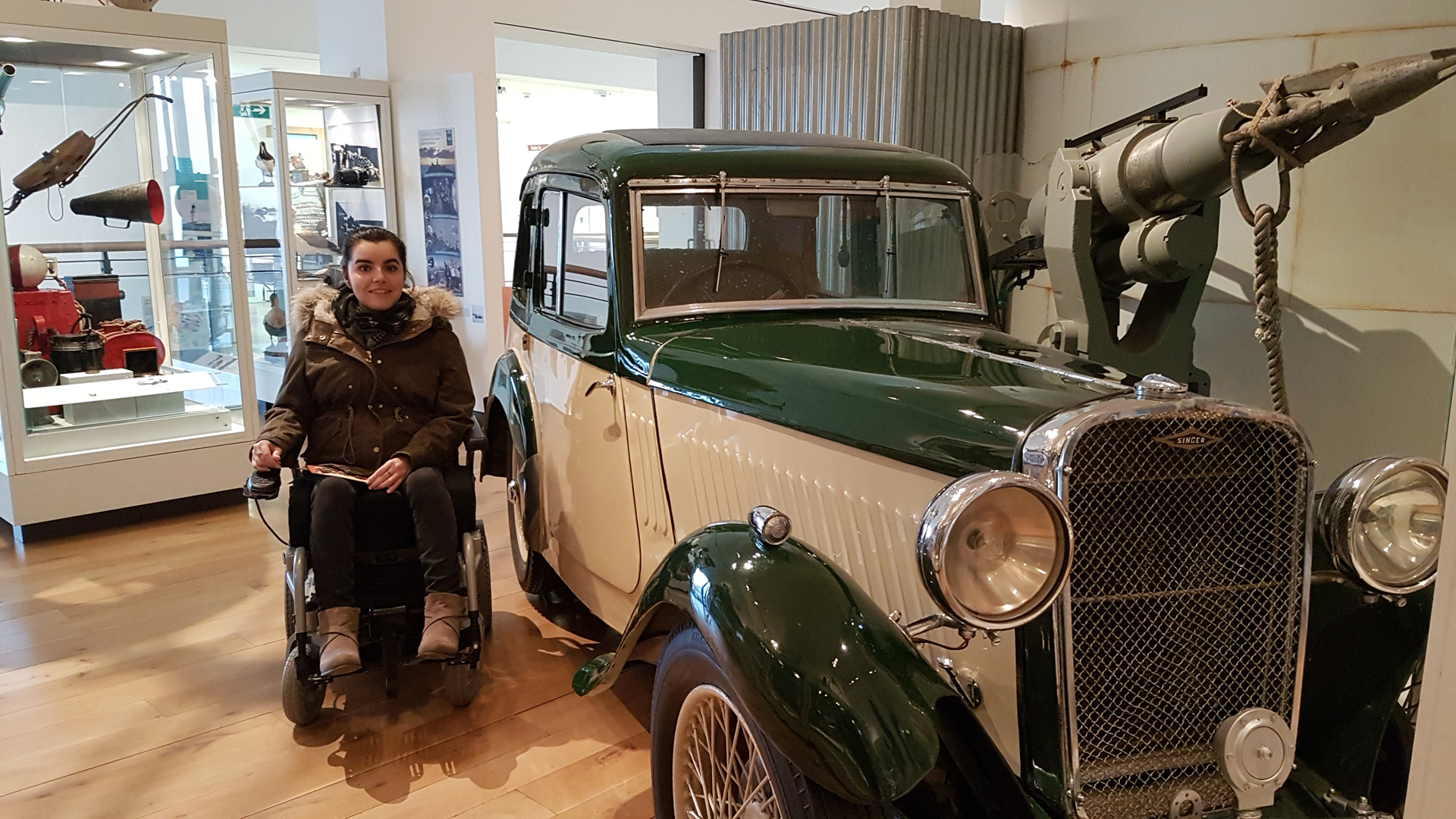 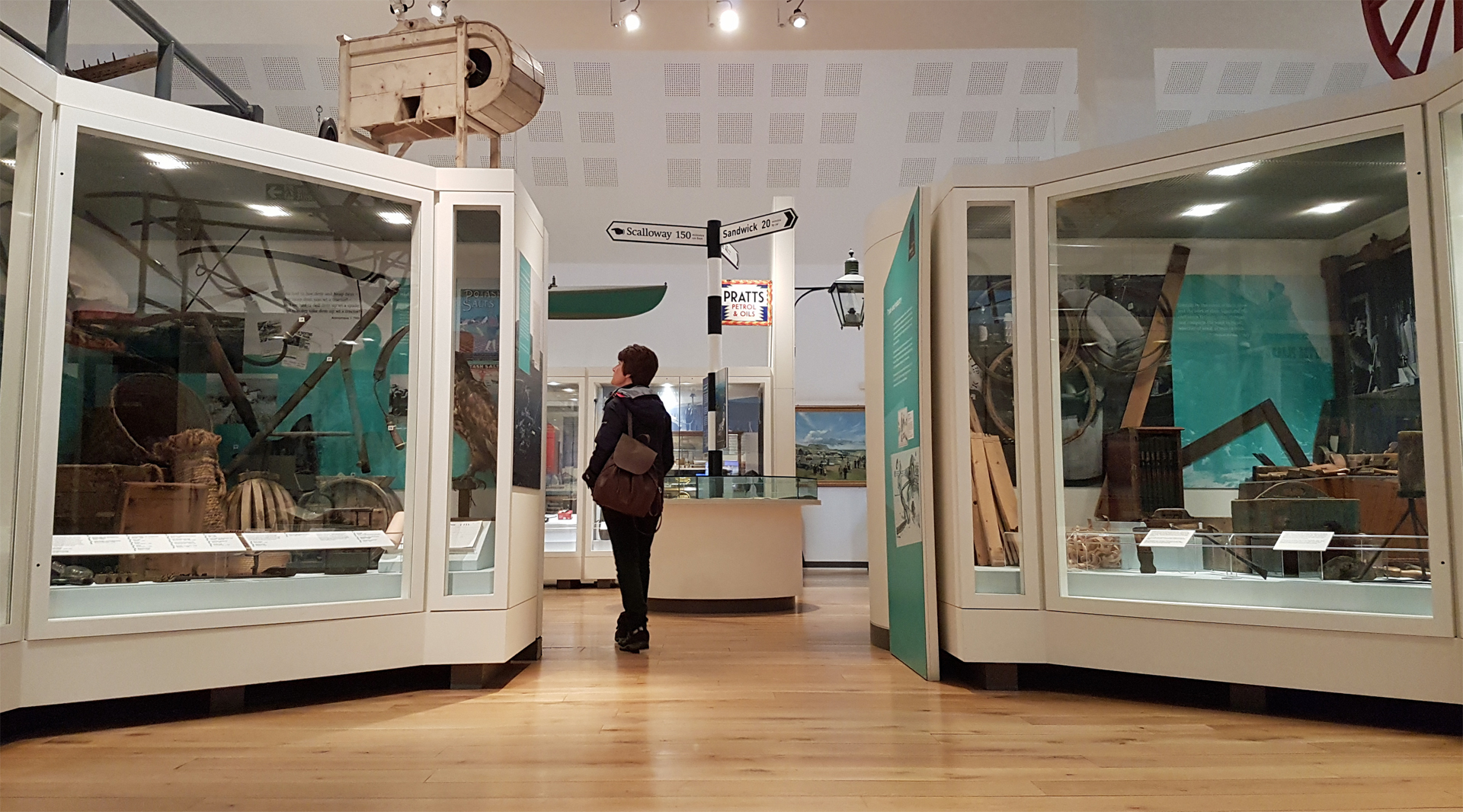 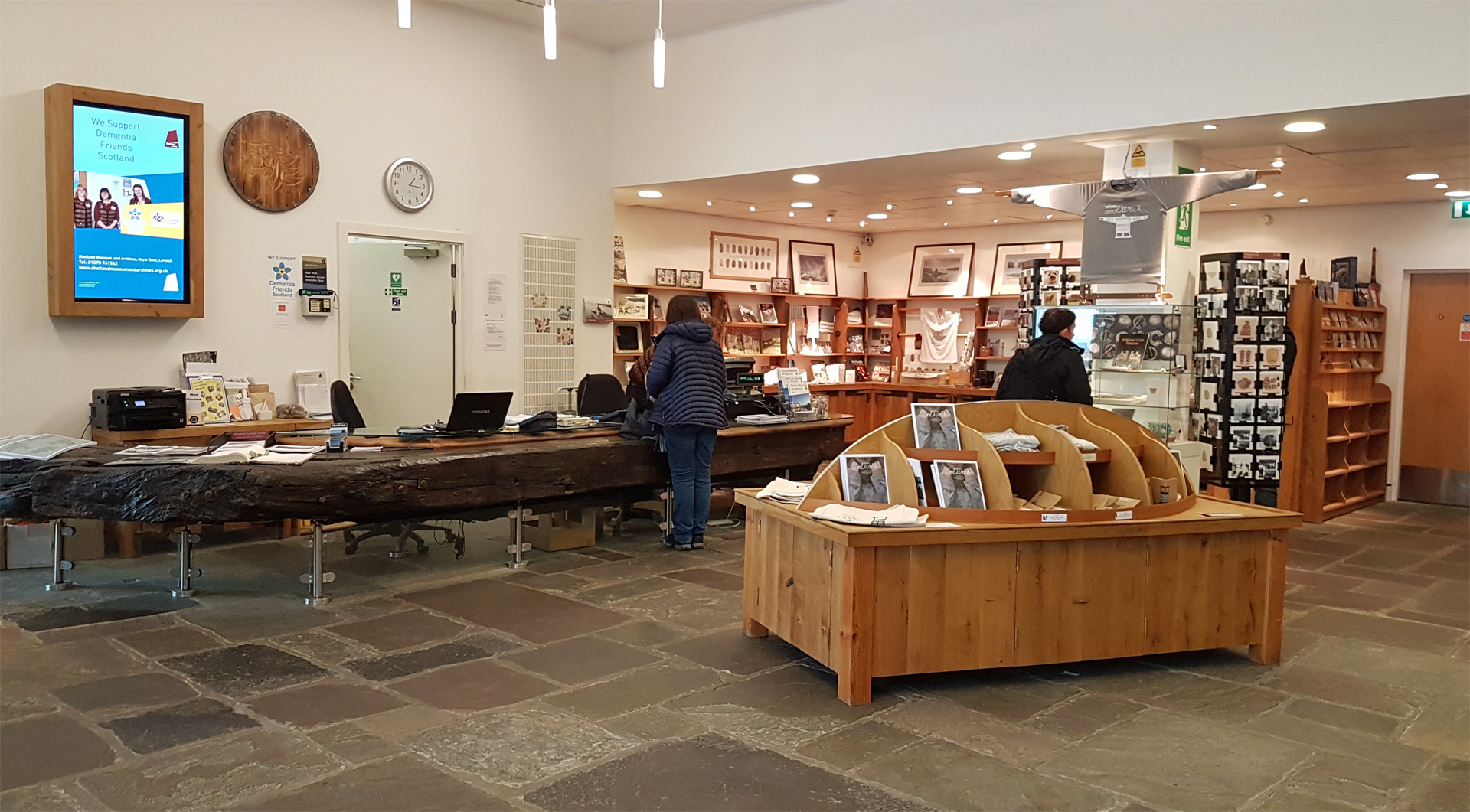 The Shetland Museum and Archives is very modern and looks great both inside and outside. We spent a while wandering around the exhibits and met a lovely woman who worked there. She chatted with us and offered advice for the area. We were keen to see some Shetland ponies since we were in Shetland but she explained that it was too far for us to walk. The museum was interesting and we learned about the history of Lerwick and of the Islands as well as the people who have lived there throughout the years. 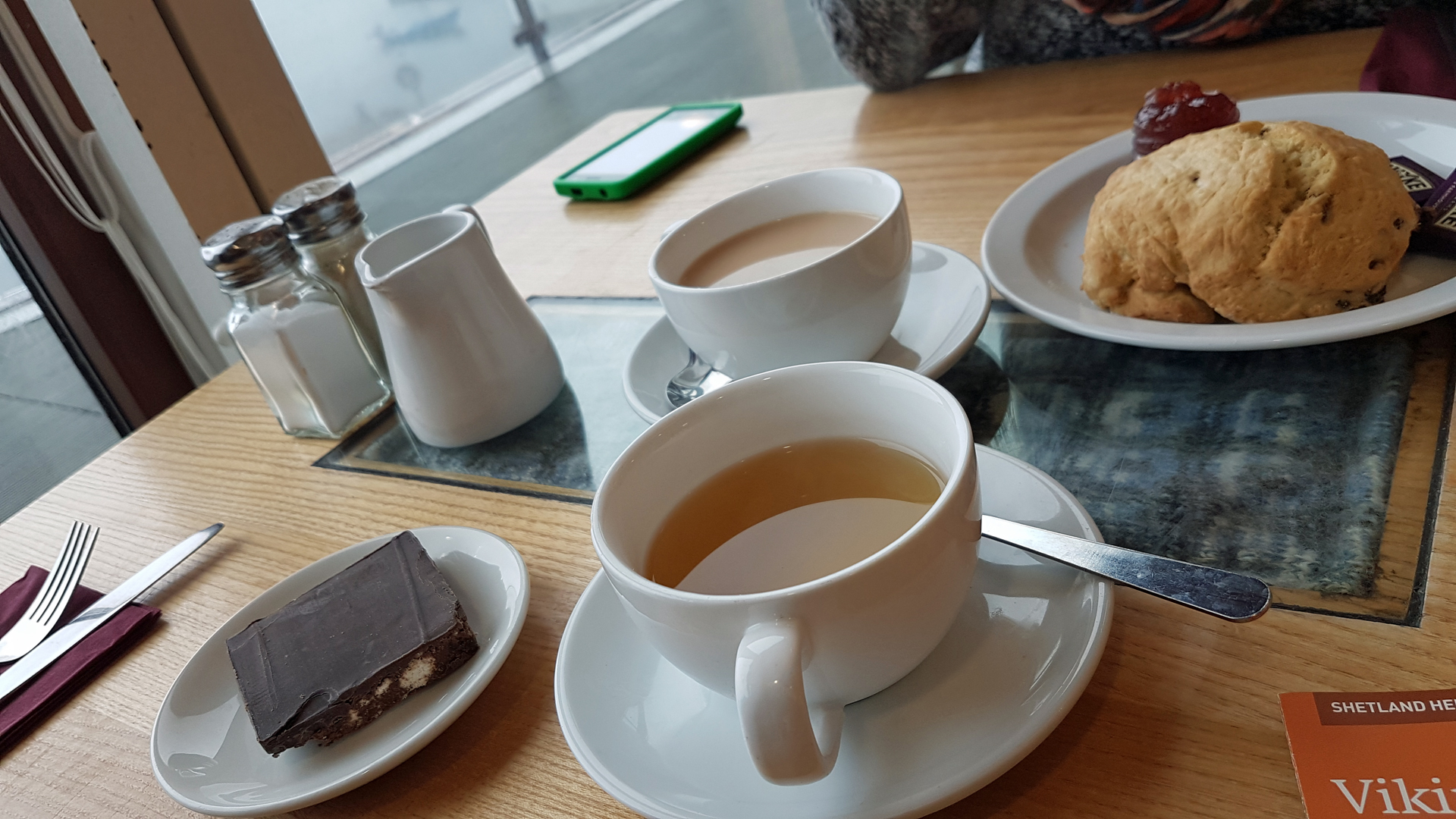 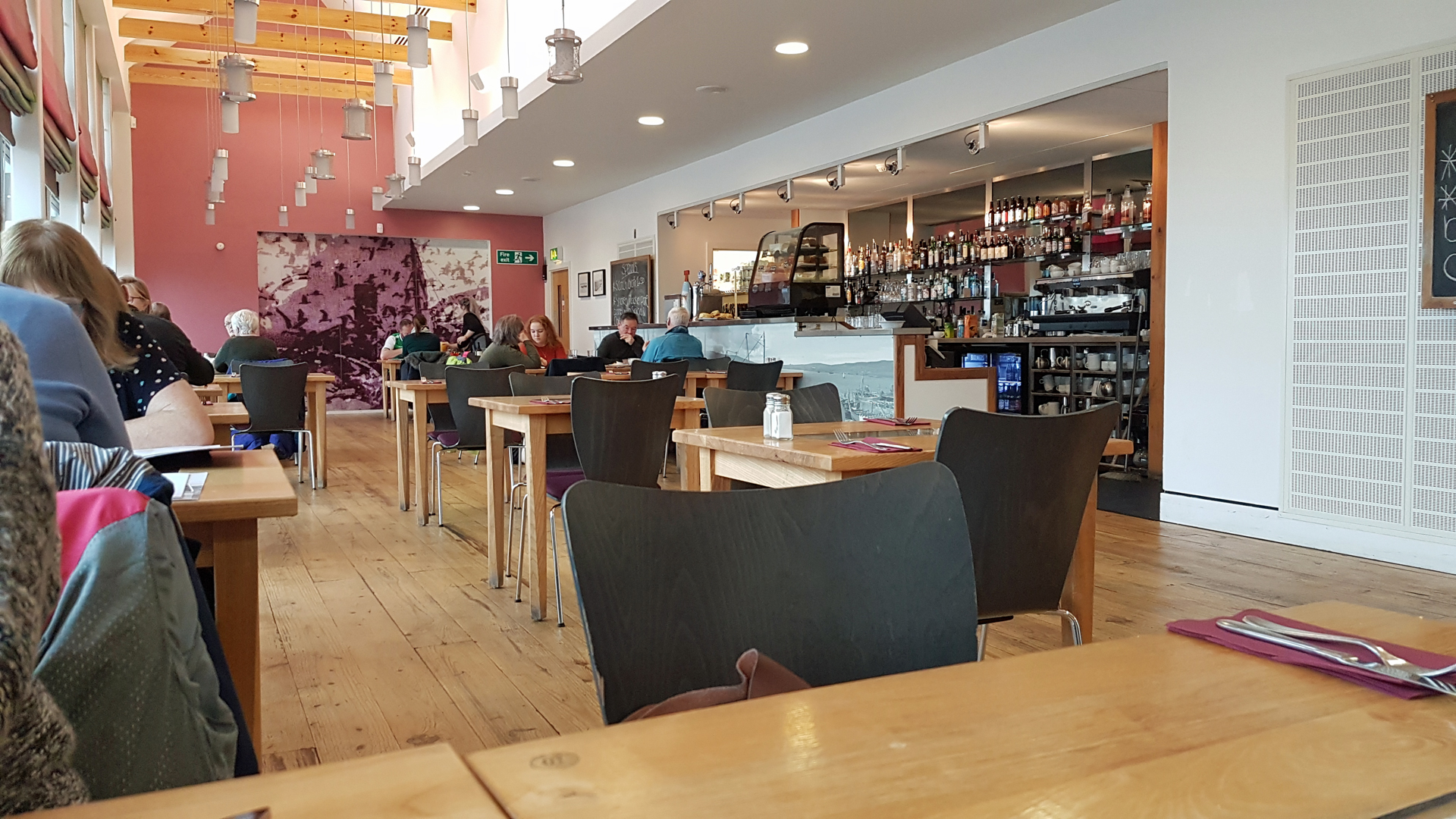 After a look around we went to the Hay’s Dock Café Restaurant within the museum. The restaurant was on the top floor so we took the lift up. We sat next to the large windows to enjoy the view across the sea. It was a little cloudy but it was still nice to look out. We got some mint tea and cakes. There was even a vegan cake so I was happy with that.

The restaurant was really nice so we were happy to spend quite a while in there especially as it was so cold outside. While sitting in the restaurant two of my fellow Euan’s Guide ambassadors came in so we chatted with them for a while too.

We later took a walk along the main street in Lerwick and did some window shopping as most shops were closed. I had looked online for quirky cafes before our trip to Lerwick and found The Peerie Shop Cafe. It has a really cool shop selling all sorts of awesome stuff. Although I managed to get into the shop, it was an incredibly tight squeeze. Once inside I was worried I wouldn’t manage to get back out due to the angle and tight turn at the doorway. Thankfully I did, but it was a close one. 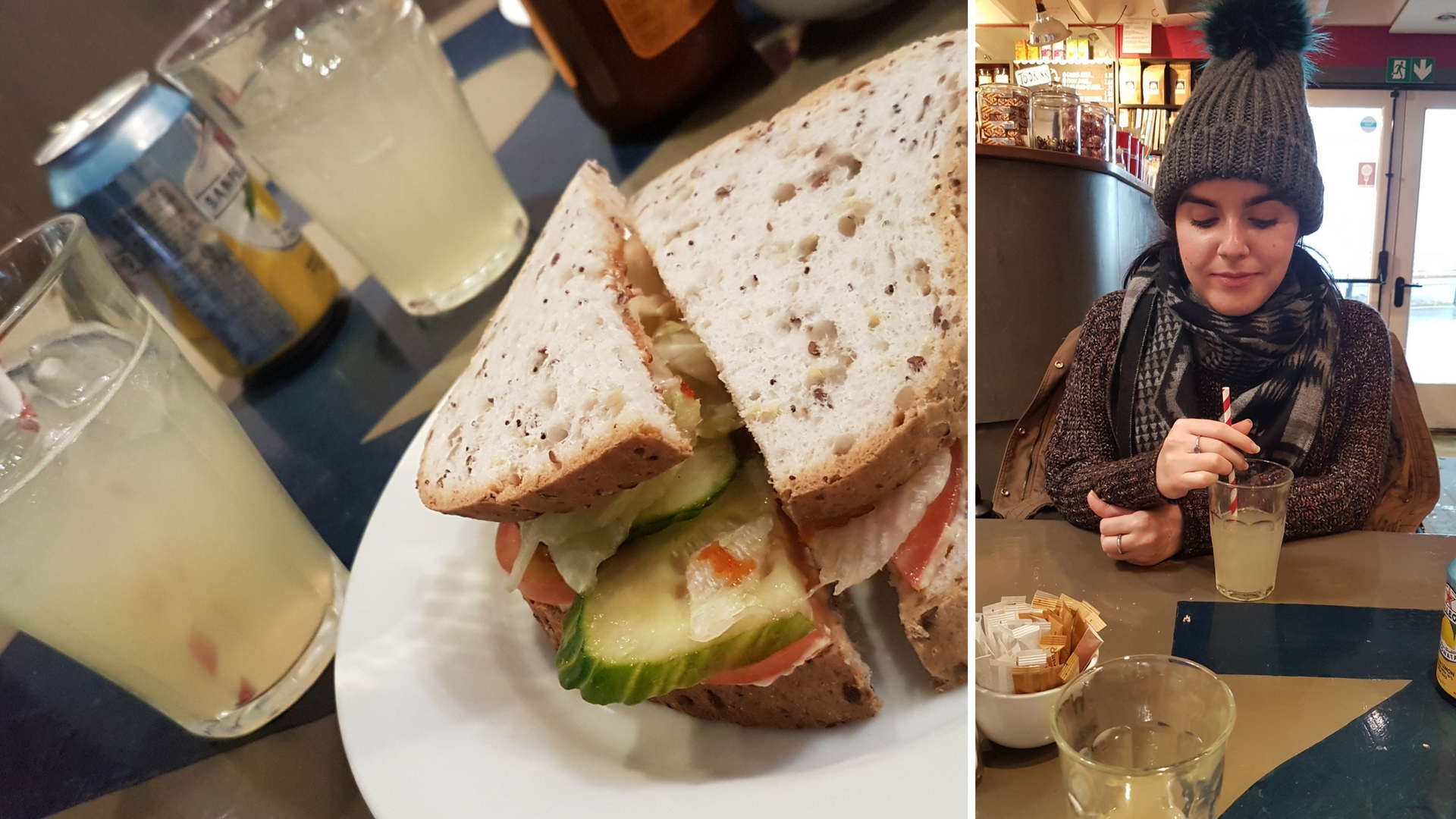 The café was also really cool inside. It’s also very small with an upstairs, but we managed to get a table downstairs near the door as someone kindly gave us their table. Thanks! My mum and I both got a sandwich and lovely homemade lemonade. It was a delicious lunch.

The weather was getting worse so we decided to make our way back to the terminal to wait for our time to board the ferry again.

It was lovely and warm inside the terminal which was a welcome relief from Storm Brian. While waiting to board I used the accessible toilet. It was a good size with plenty of grab bars. The only negative about this accessible toilet was there was no emergency pull cord so I wasn’t able to hang my Euan’s Guide Red Cord Cards. 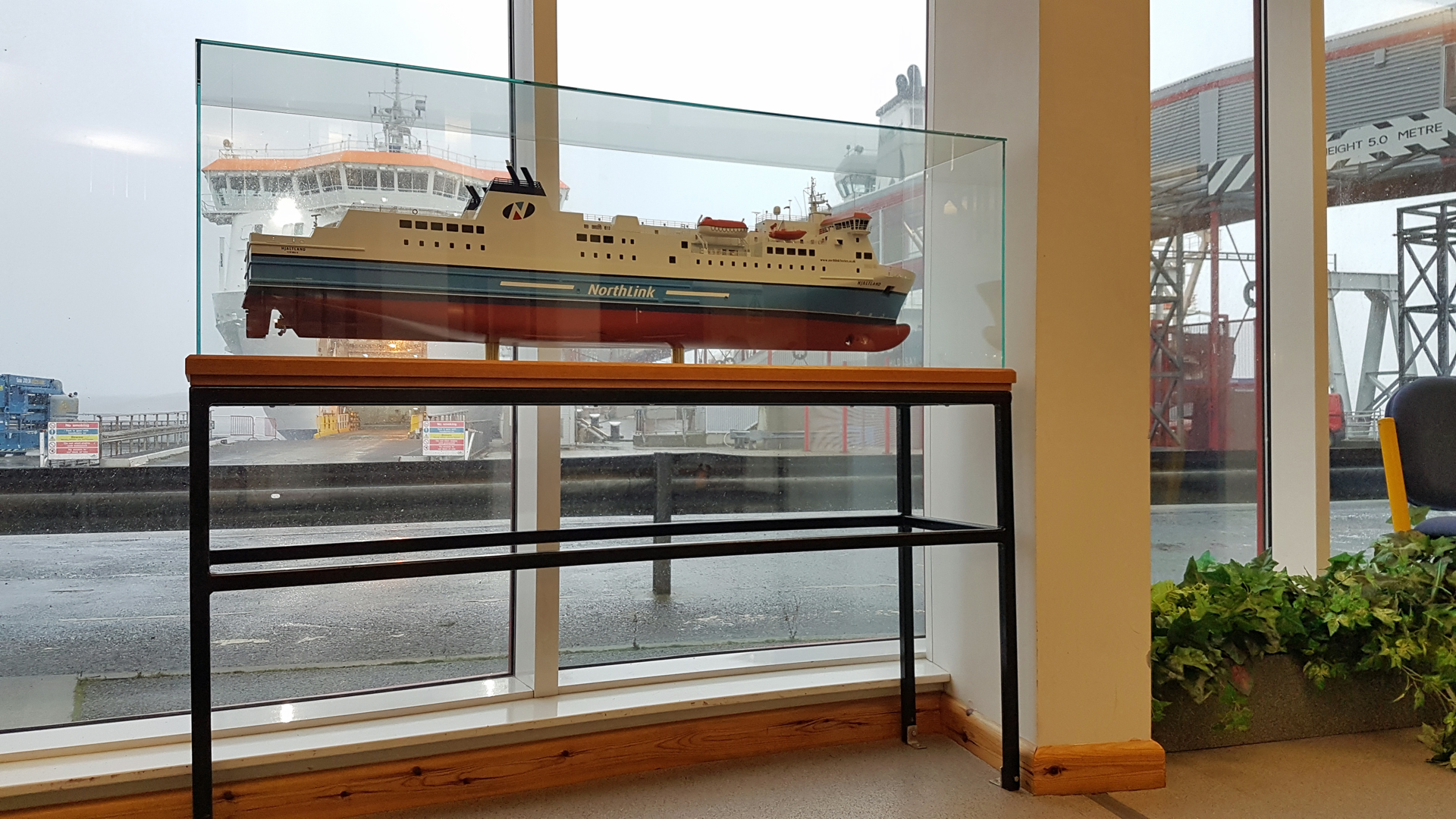 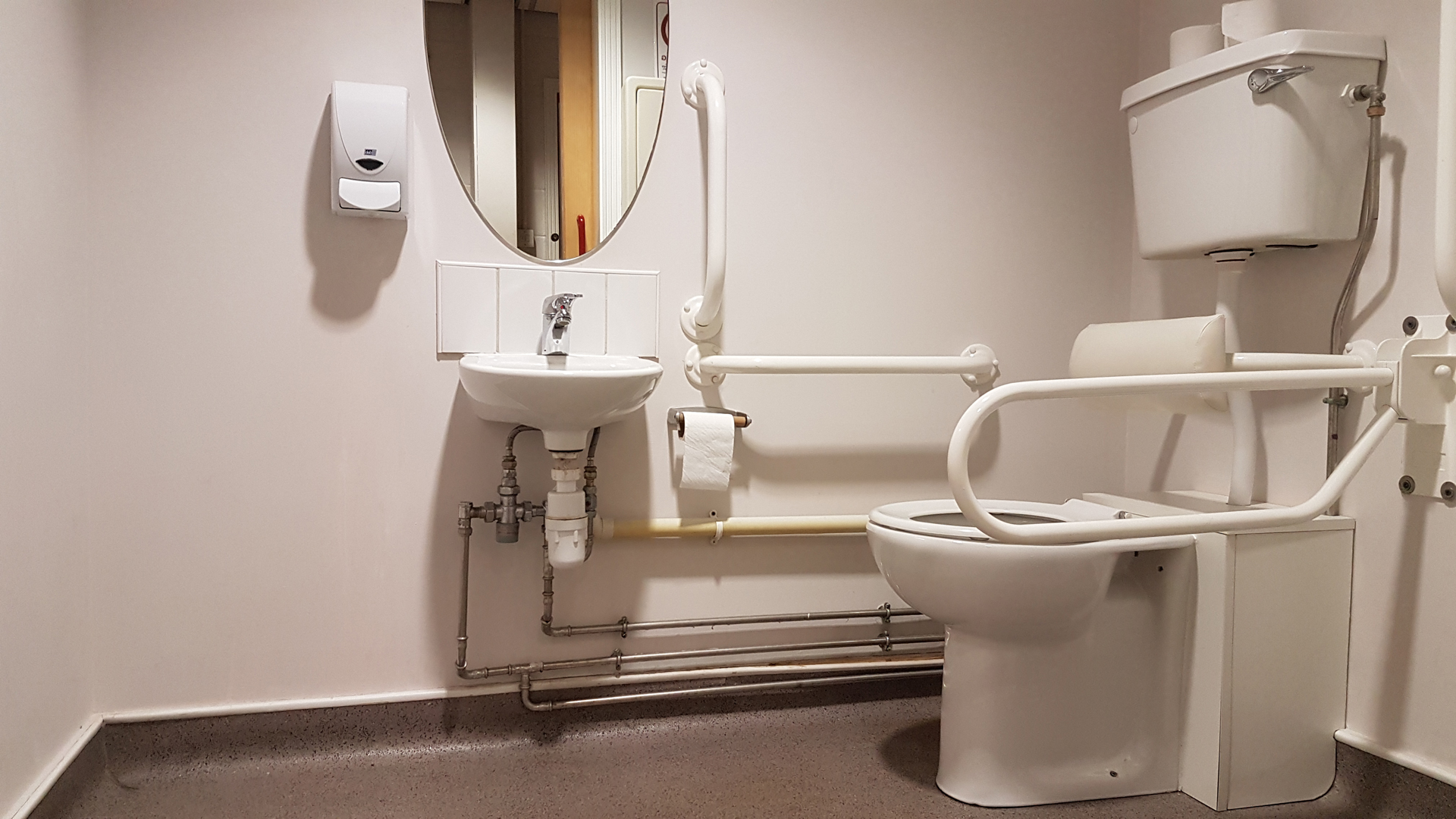 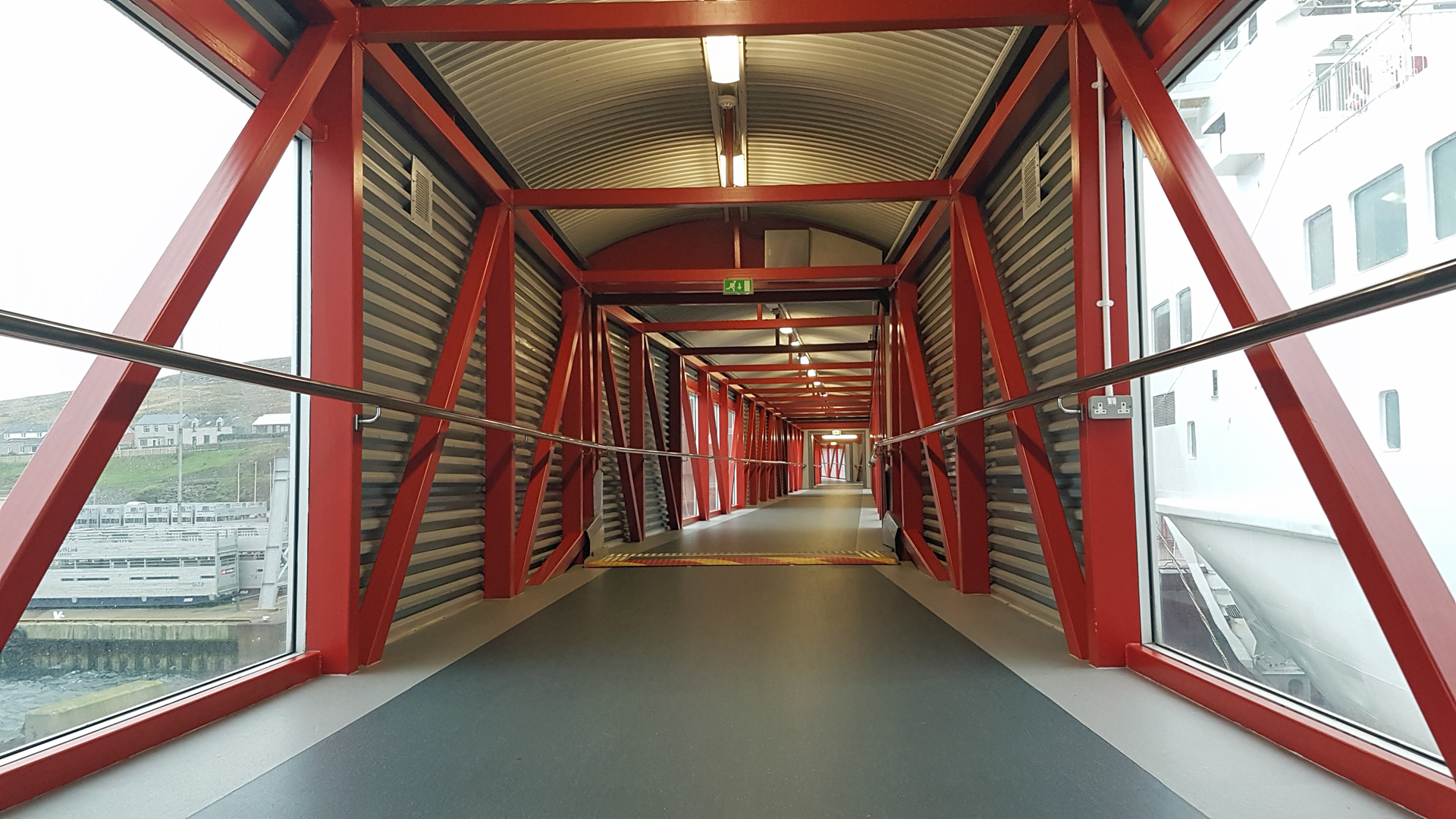 My trip to Lerwick on NorthLink Ferries with my Mum was a memorable one. It was a great experience to join the other Euan’s Guide Ambassadors and visit somewhere new with my Mum. However, I can honestly say I’ll never forget feeling so vulnerable during the trip when my Mum became so unwell especially as I rely on her 100% to look after me. As a disabled person, this was one of my worst nightmares come true. On a positive note, it was all good in the end and we enjoyed our trip. Since we didn’t take our car on the ferry we felt restricted to Lerwick. The next time it would be great to explore outwith Lerwick and see all the beautiful sights and scenery Shetland has to offer. The staff onboard NorthLink Ferries MV Hrossey were absolutely fantastic. They provided great service and nothing was a hassle for them.

A massive thank you to Euan’s Guide and NorthLink Ferries for inviting me on this Ambassador trip.

Things That Made Me Smile This Week #1 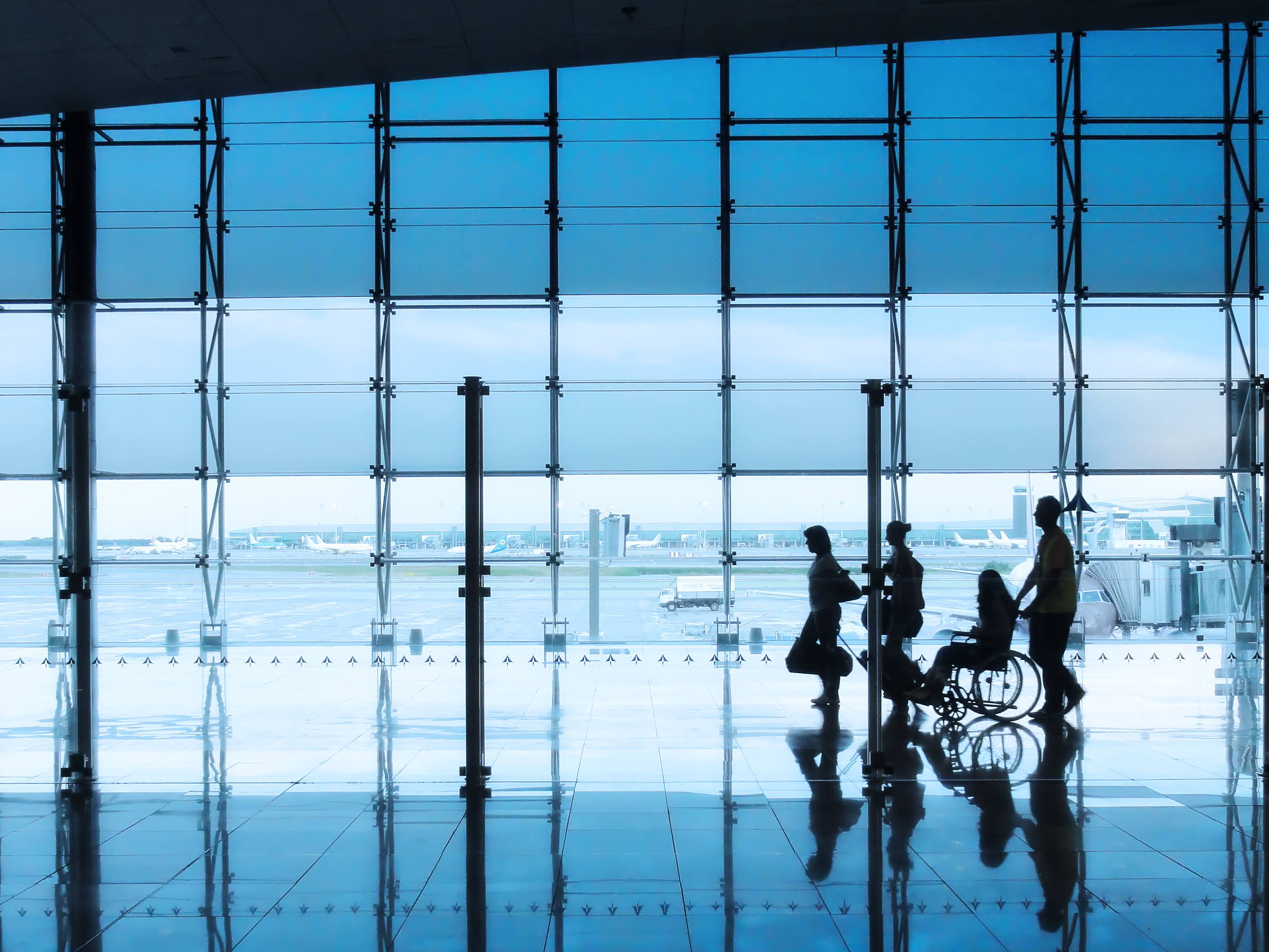 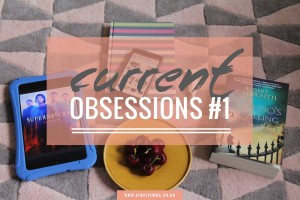 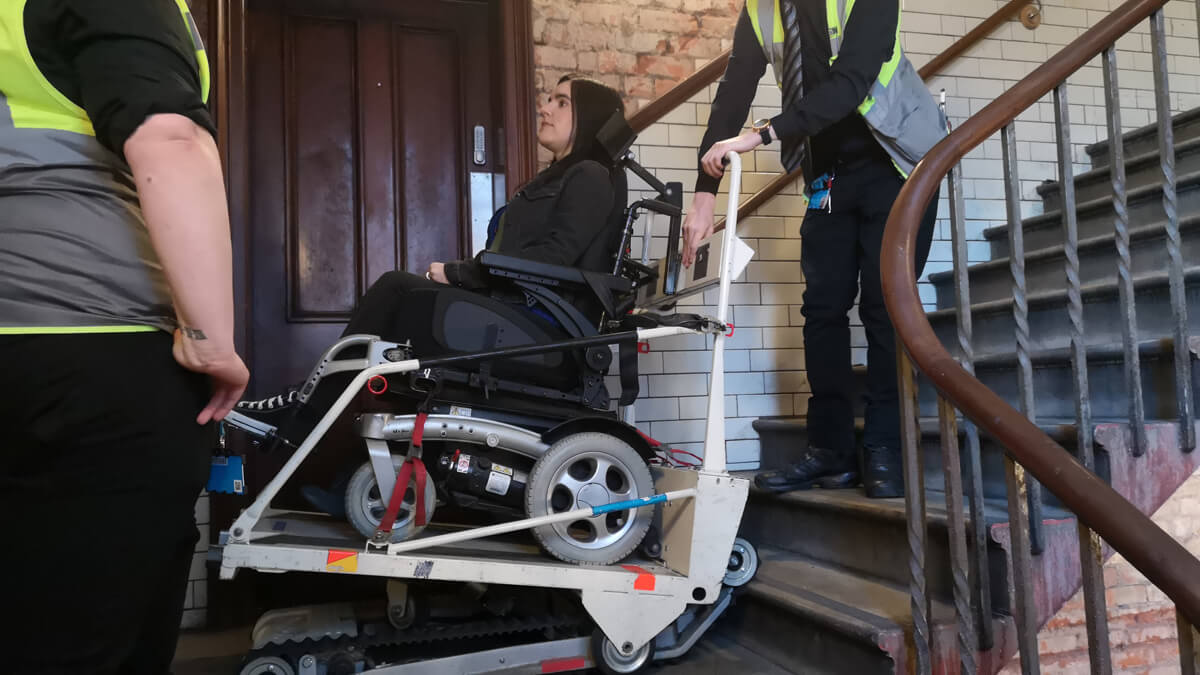