Having never been to Manchester Etihad Stadium before I was intrigued to find out what the accessibility was like and most importantly…the view from the accessible seats. Performing was the legendary Foo Fighters. So without further ado, here is my Manchester Etihad Stadium wheelchair access review and video showing what it is like to go to the stadium as a wheelchair user.

Booking accessible tickets for Manchester Etihad Stadium was easier than I thought it would be or maybe I was unusually lucky that day. I called the accessible ticket line and spoke to a helpful woman.

After a few minutes of discussing the location of the accessible seats and the woman talking me through a virtual video of the seats, we booked our tickets.

I was advised to send in proof of disability to the access email address (access@mancity.com) which I did immediately after booking our tickets. Proof of disability was required in order to qualify for a free PA ticket.

Getting to Manchester Etihad Stadium

We were staying at Premier Inn Manchester Bury which was around 20 minutes from the Etihad Stadium. We travelled down to Manchester on Monday evening and after breakfast, on Tuesday morning we made our way into Manchester city centre.

We stopped off at Manchester Museum and had some lunch at the cafe. Both the museum and cafe were amazing, but more on that in a future post.

From there, we then made our way towards Etihad Stadium. There is an Asda superstore across the road from the stadium so we killed some time there before making our way to the Foo Fighters show. From the Asda car park, we were able to hear the support act, Wolf Alice.

As we drove closer to the Etihad Stadium we are met by herds of Rock ‘n’ Roll fans scattered across the roads, all here for a rock show. All here for the mighty Foo Fighters.

Two weeks before the gig I decided to book disabled parking at the Stadium. Being so close to the actual event I wasn’t sure if there would be any spaces left, but to my surprise there was. The man I spoke to while booking the disabled parking was really helpful.

We were booked into the orange car park, but it was too late to receive the window display indicating disabled parking so we just provided our name to one of the stewards at the entrance who checked the list and let us through. 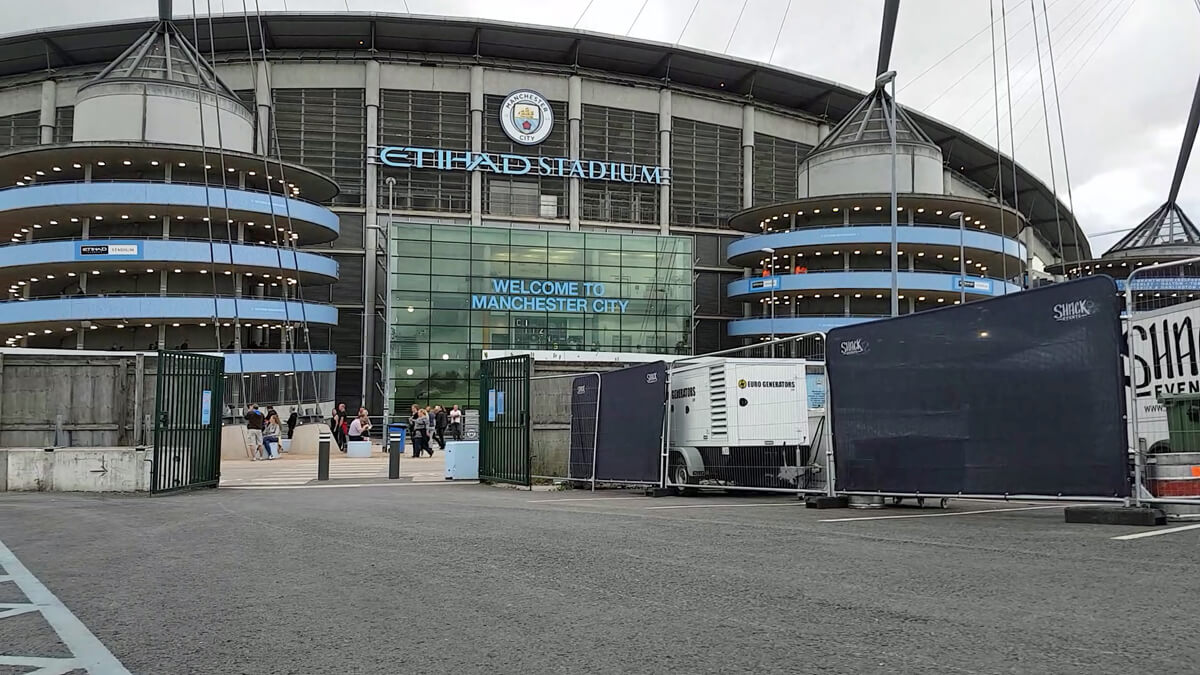 The orange car park is adjacent to the Asda superstore. The disabled car park is tarmac which is ideal and makes it incredibly easy for getting in/out of the car and is a much smoother ride for wheelchairs.

Disabled parking at Etihad Stadium is very good, stress-free and really close to the entrance, which is exactly what you want. It costs £15 to park here.

Our seats were located in Entrance S South Stand Level 1 119. We had a 5 – 10-minute walk around the stadium to find entrance S in heavy crowds of people. Once we found it the entrance staff greeted and directed us in through the level access into the foyer area. 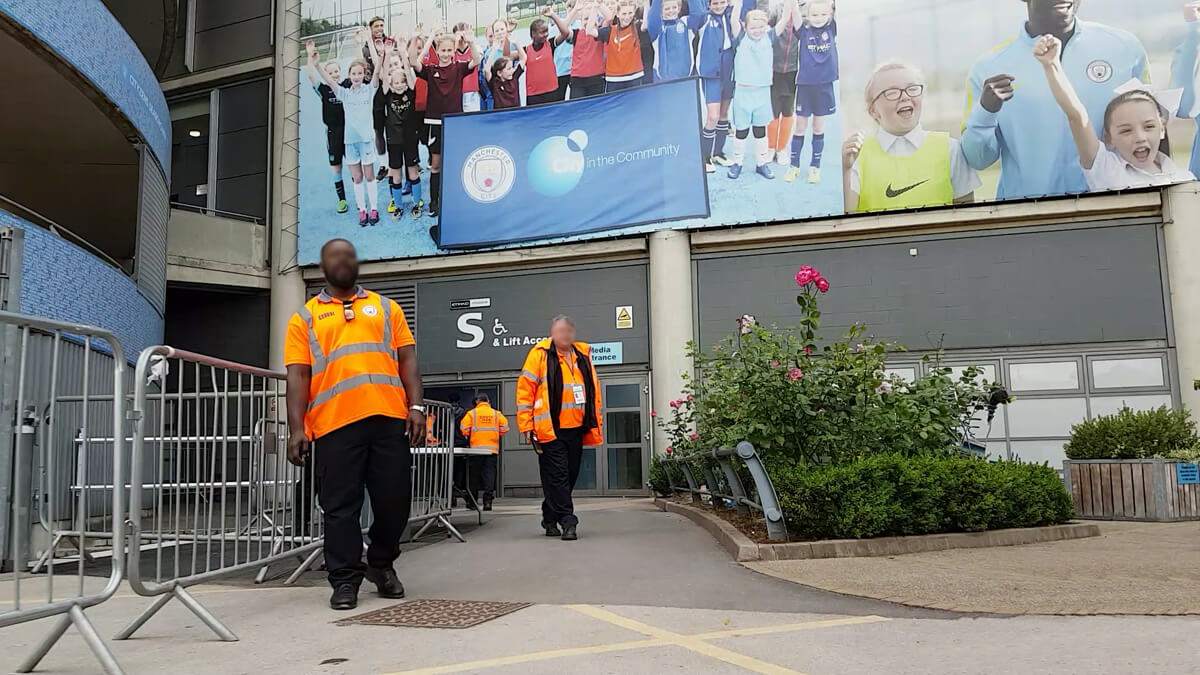 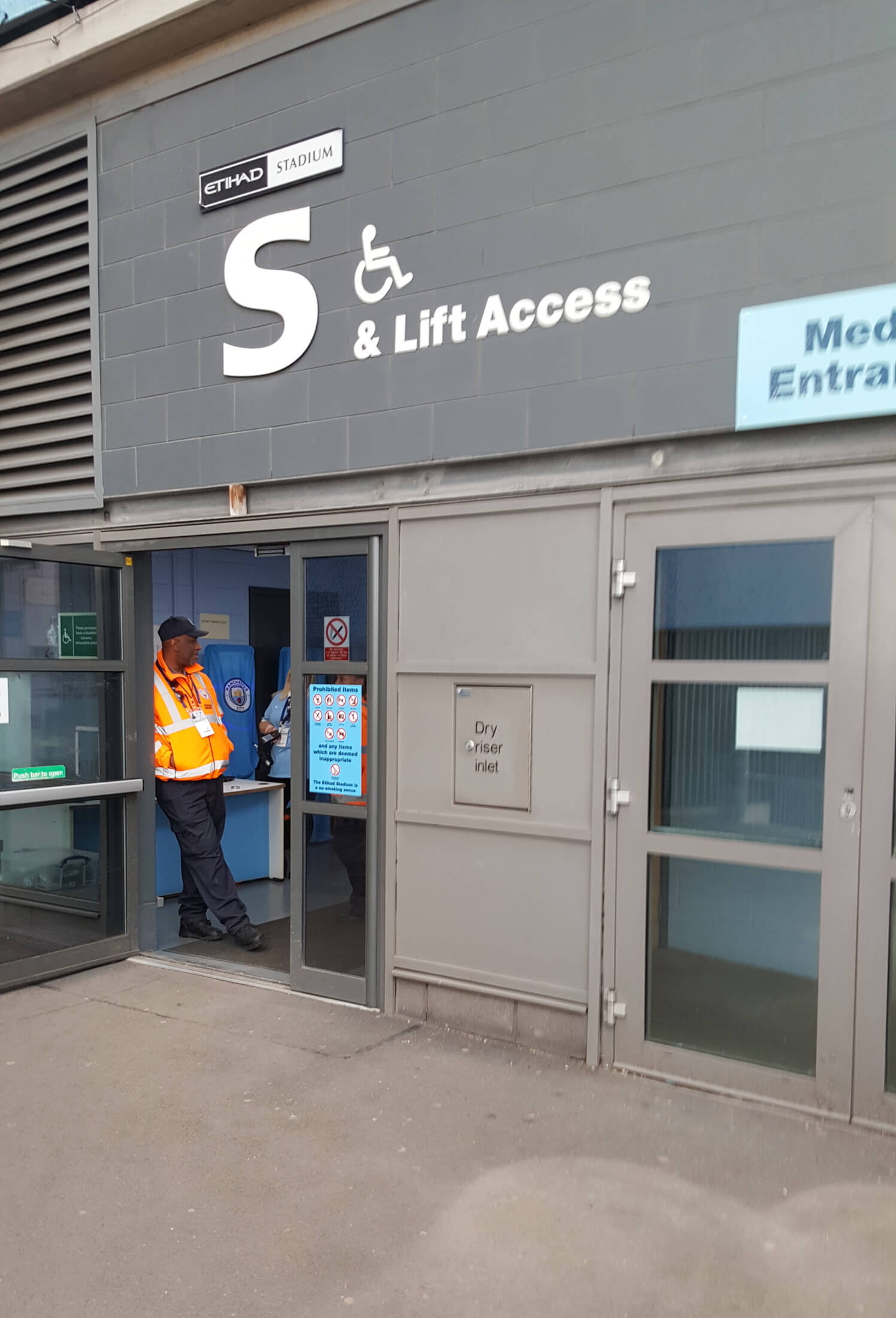 This is when it got a bit stressful due to having to work our way through a sea of people queuing up for the bar. It was completely packed and loud, so it makes it quite difficult to be heard let alone seen especially when so low down in a wheelchair. Lots of people under the influence makes it even harder.

Thankfully we make it through without injury and reached block 119. It would have been helpful if the staff were present in the foyer and contained the queues creating a safe and accessible passage.

The person who booked our seats for some reason thought it would be acceptable to book me into a wheelchair space but book Allan five seats along from me. We could not understand this. I am there with my carer and in my case my partner for a reason.

I need assistance with drinking, eating, lifting my arms, changing position in my wheelchair when I’m sore. So what good would it be if he wasn’t even sat beside me? Do we not get to enjoy it together like everyone else?

We enquired about this and were told we could move along to a few random empty seats in the row but will be moved if people arrive who’s seats they are.

This caused a bit of anxiety for the next 45 mins or so as every time we seen someone we thought it was their seat. 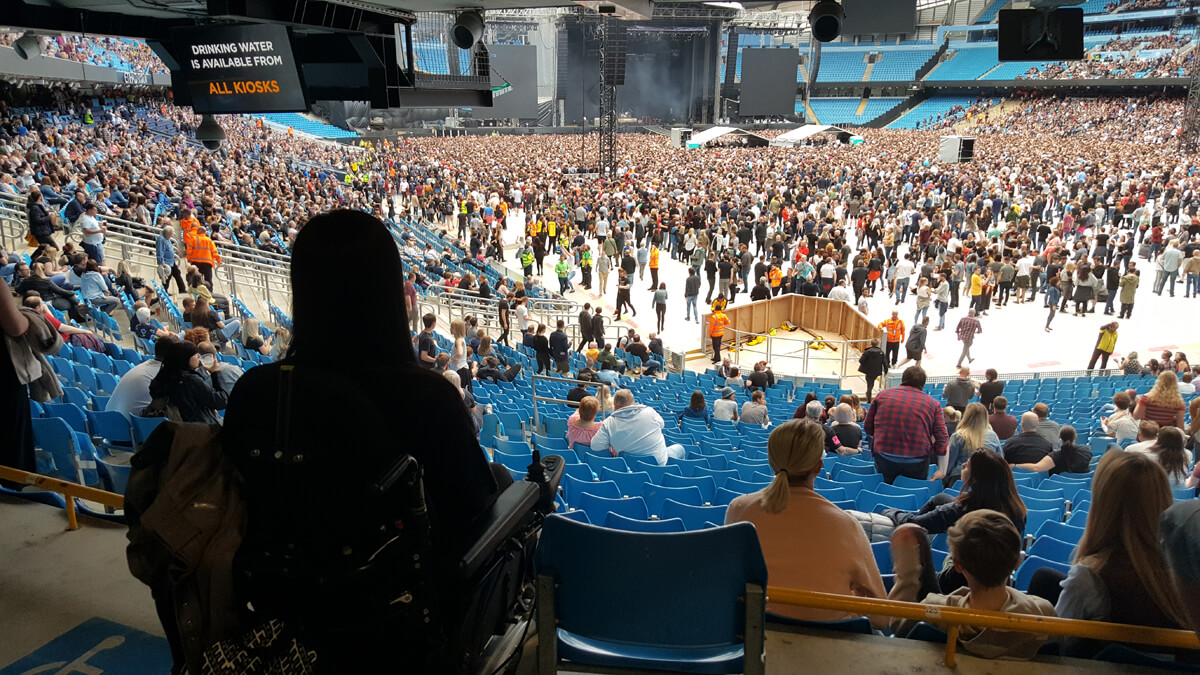 We really didn’t want to move as we had a fairly good view of the stage. Luckily no one showed up so we were able to sit there the entire show.

The sound was good for an outdoor show which can sometimes be ropey due to the wind blowing sound around.

Our seats were also undercover so we were sheltered from any wind and cold. Although it was a lovely night so it wasn’t a problem. 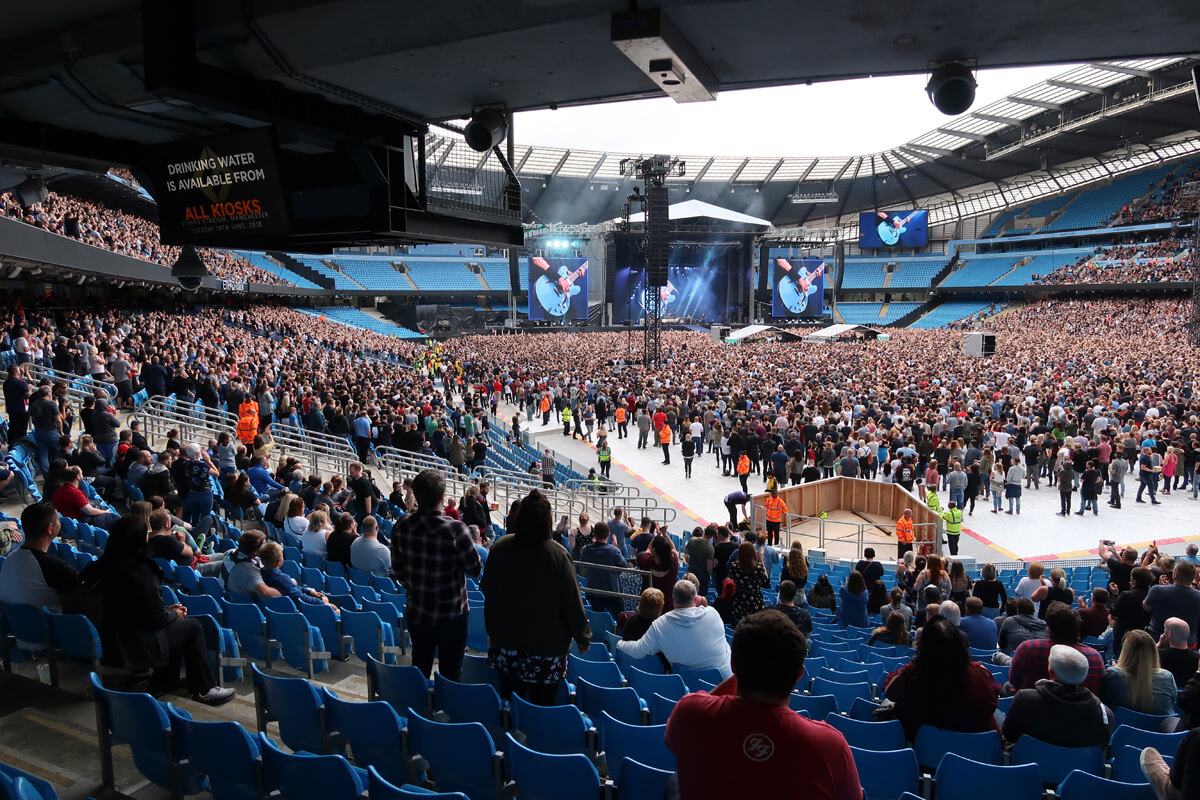 I didn’t actually use the toilets, but there are accessible toilets as well as Changing Places. These toilets are operated with Radar Keys so they won’t be misused, abused or left dirty.

As for the Foo Fighters, well what a performance. It was my first time seeing them, but Allan has seen them a few times before. The support acts came in the form of two pretty big acts in their own right, The Cribs & Wolf Alice. Unfortunately, we didn’t catch their sets but heard a portion of Wolf Alice from the Asda across the street. 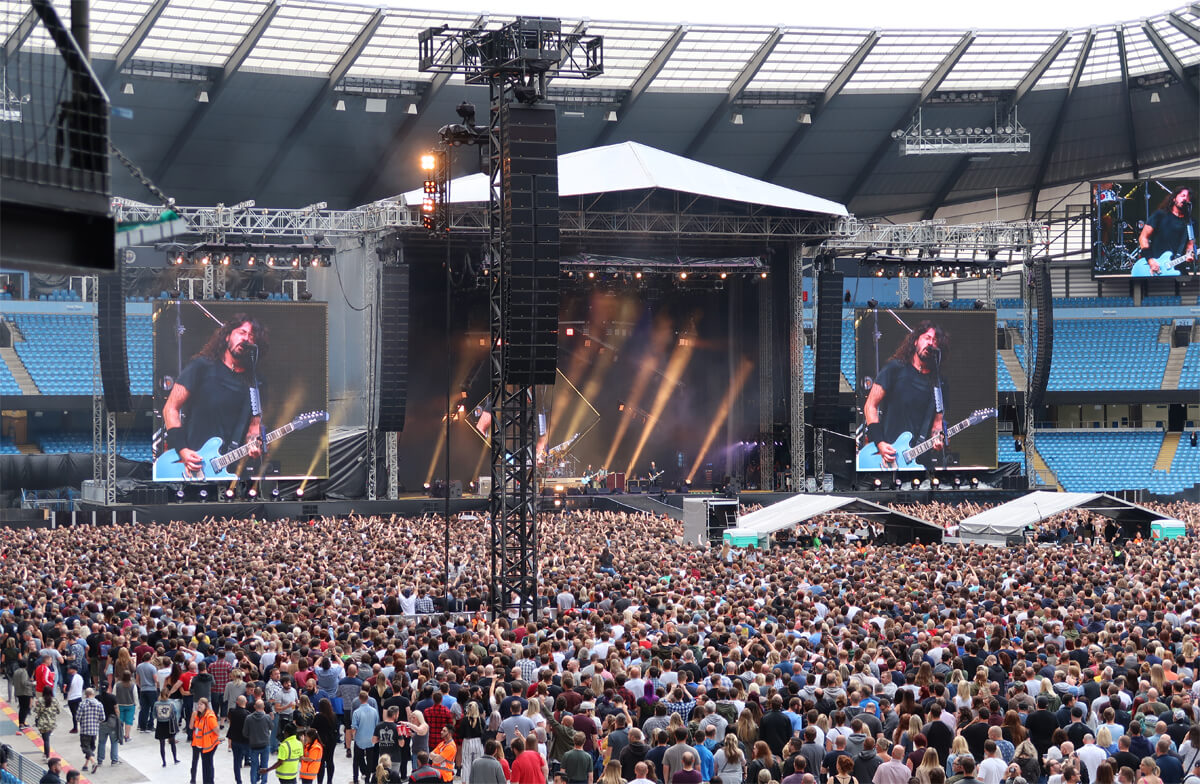 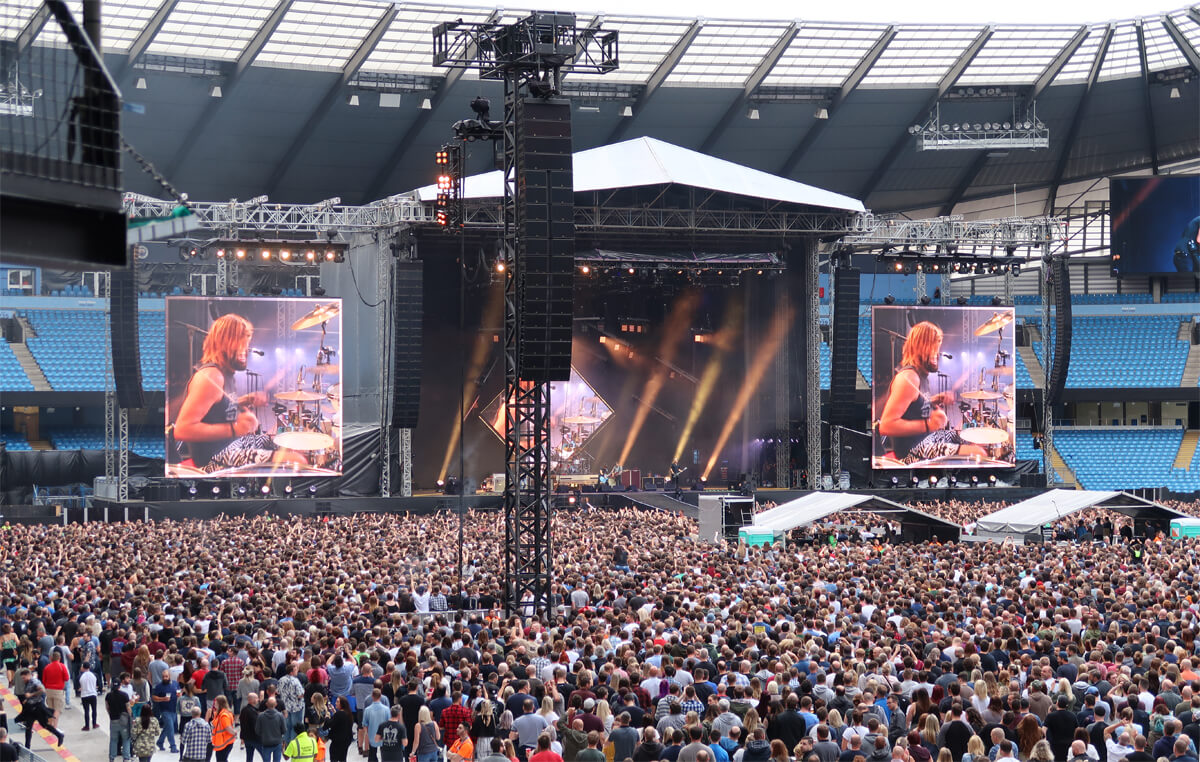 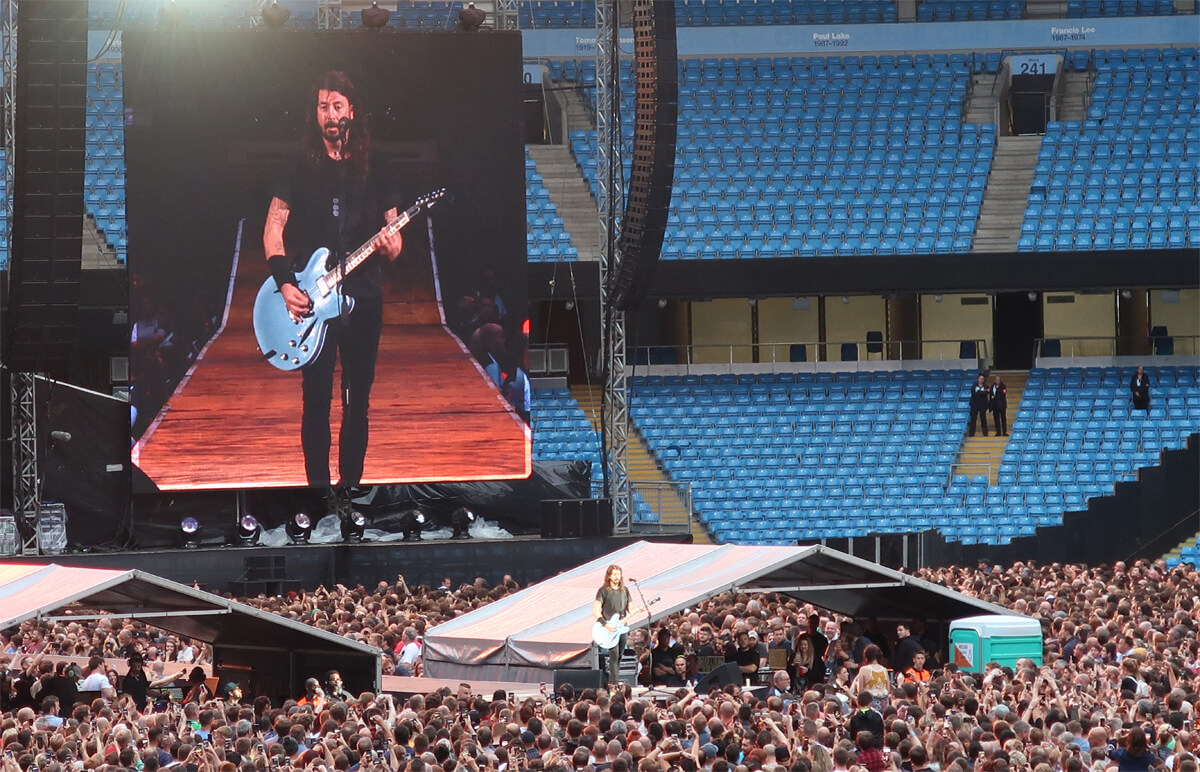 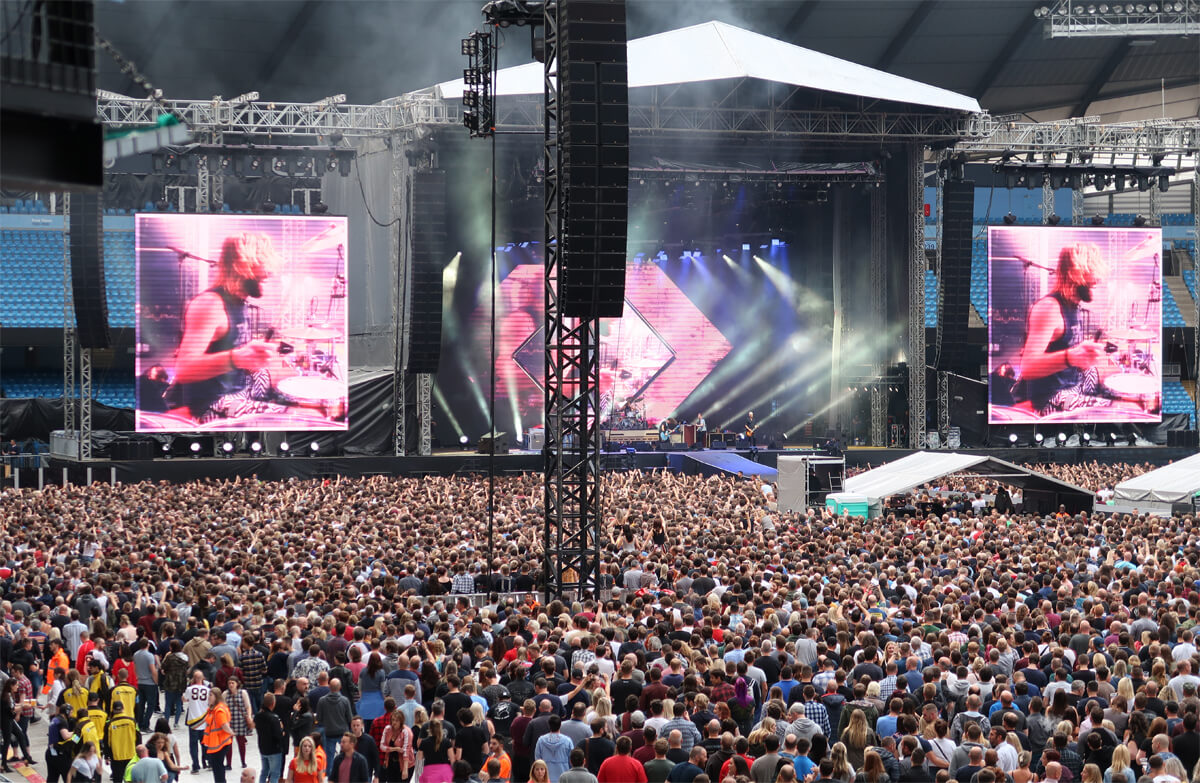 Having been around for 24 years there are so many hits to pick from in terms of creating a setlist. Foo Fighters were born after the demise of Nirvana and they still put on an electrifying show like the one at Etihad Stadium.

They had the stadium shaking with their sound and performance. Rocking until they are breaking the curfew at their live shows – as always. 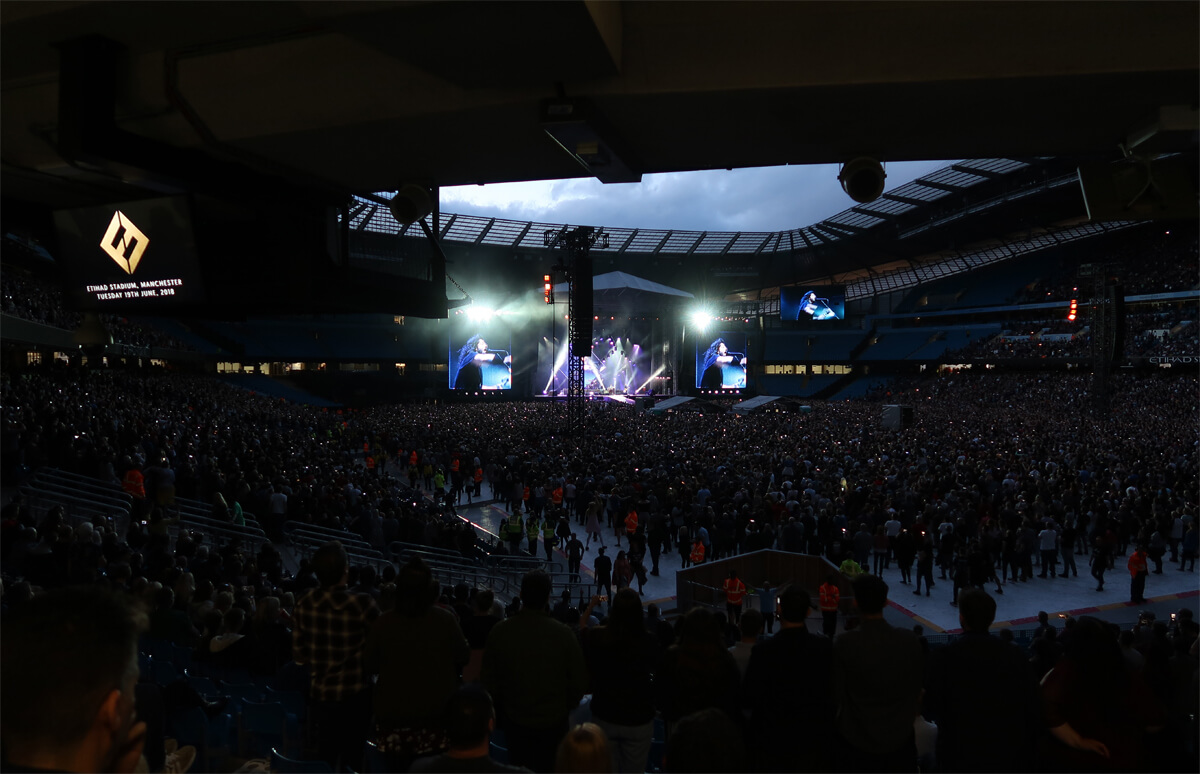 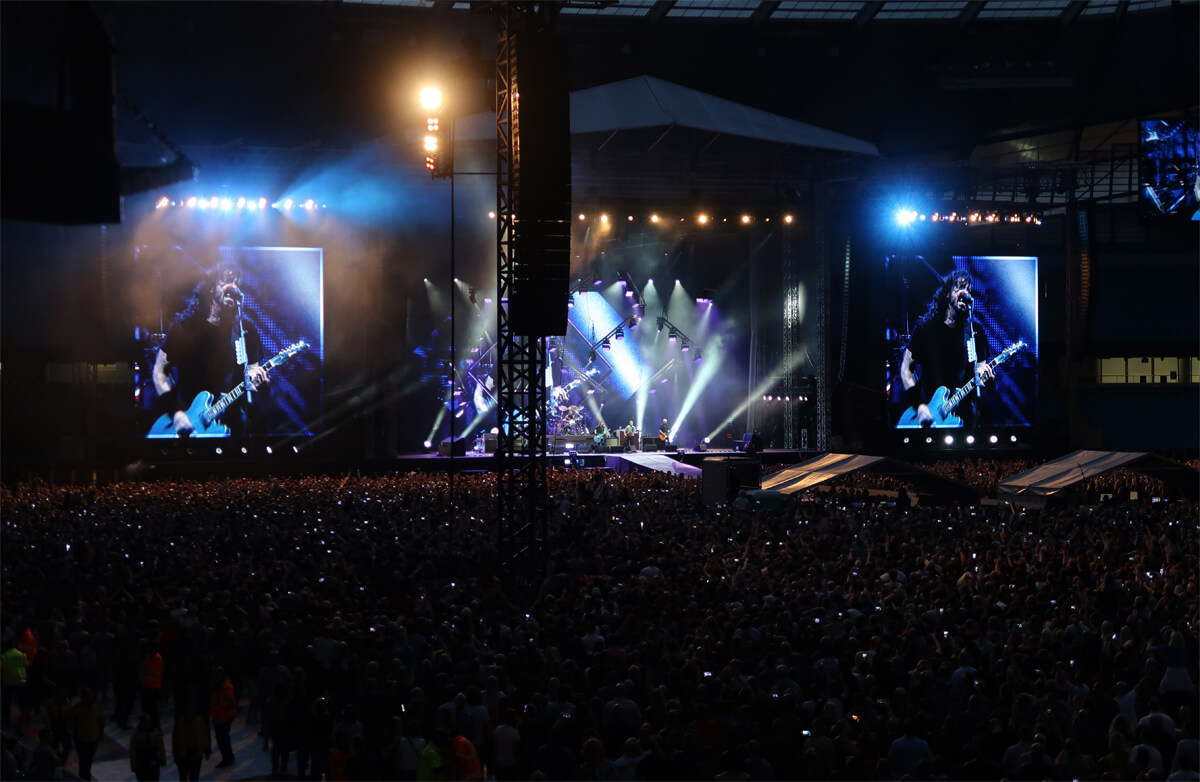 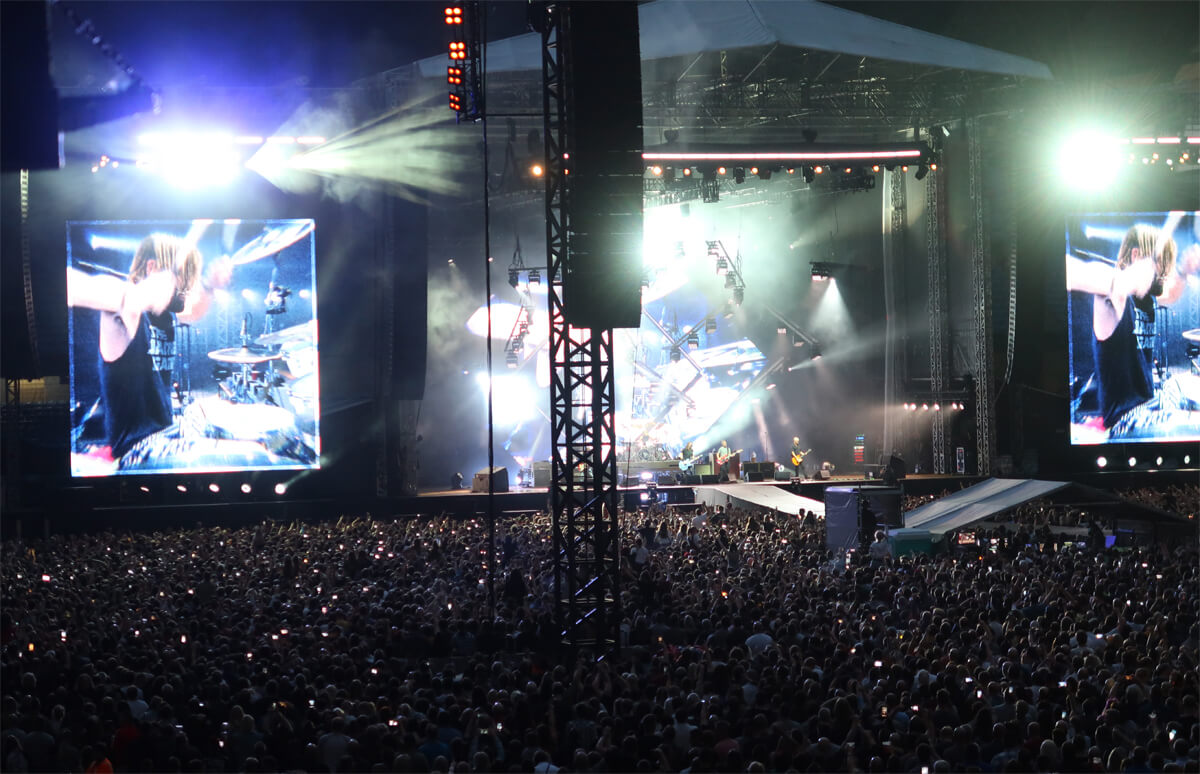 After looking through Instagram just hours before the show, Allan seen that although they are some of the most famous rock n roll legends in the world, the band actually boarded a Virgin Pendolino to Piccadilly for their Etihad show. They stopped for selfies with fans in the station. Proving Dave Grohl’s reputation as being the nicest guy in rock ‘n’ roll. Pretty cool! 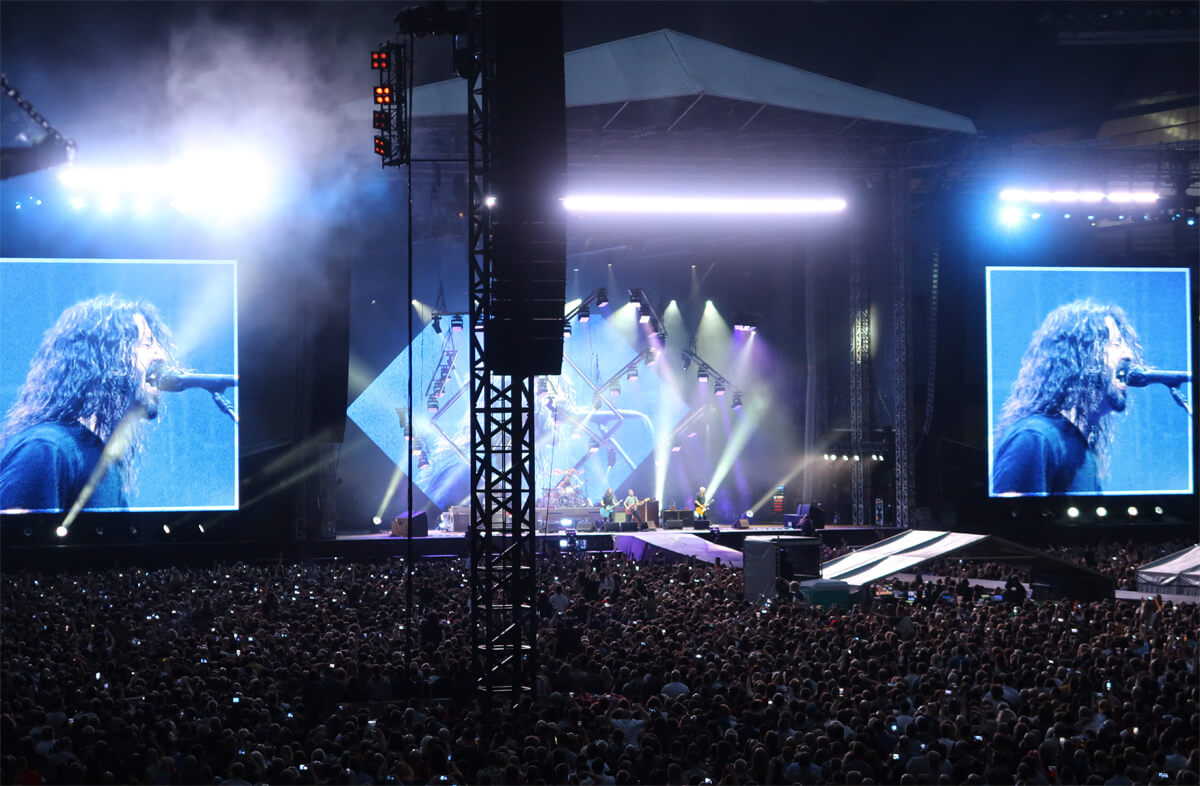 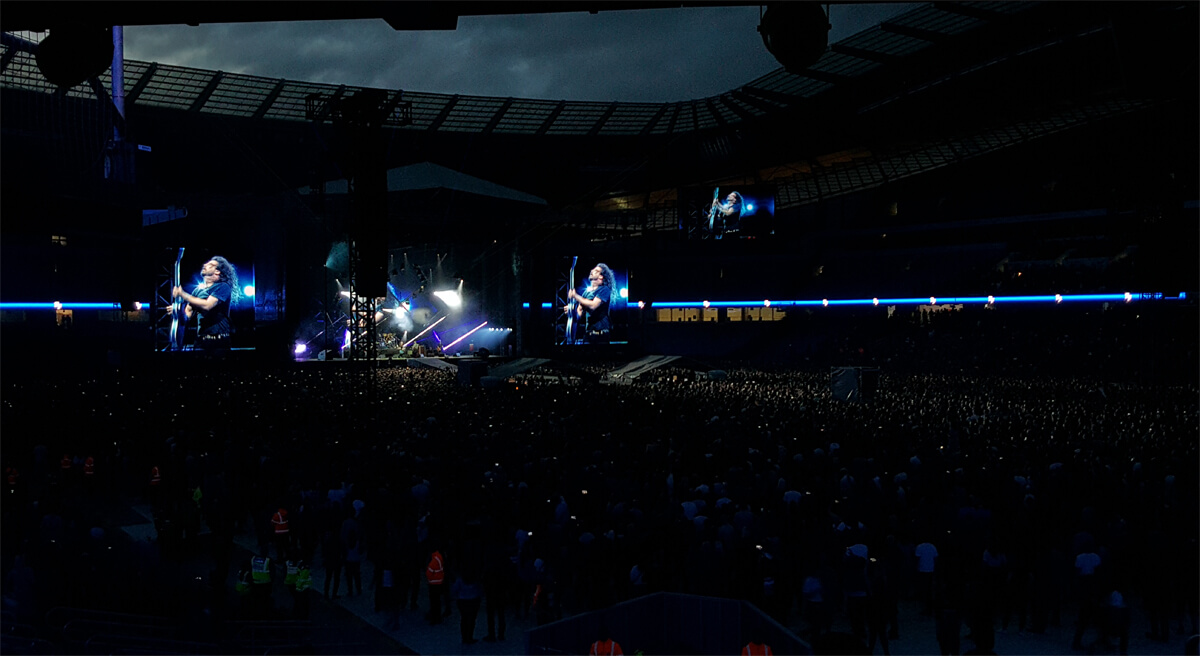 All My Life opens up the show while Dave Grohl runs up and down the runway roaring “Are you f**king ready?” Followed by Learn to Fly and a two-and-a-half hour barrage of their greatest hits. Times like These and Everlong were left for the encore and the crowd were absolutely loving it.

Foo Fighters came on at 8pm and played for just under three hours. It was non-stop the entire time. I left with my ears ringing, but that’s a sign of a great show.

We decided to start making our way out five minutes before the show ended. This made leaving really easy as there were no crowds so we managed to get back to the car within a few minutes.

We also exited through a different door from the one we entered, which was easier and quicker. The easiest exit we’ve ever had.

We were also able to exit the car park without any problems before the crowds had even started to properly exit the stadium. Perfect!

With over 50,000 people in attendance I can say without any doubt it was the loudest show I have ever been to. It was really cool to have experienced it. I liked the disabled parking and despite being £15, I would probably pay it again.

The accessible seats are really good (if you are seated beside your companion) and there are accessible toilets and changing places close by. What a night at Manchester Etihad Stadium. I’d definitely come back again!

Here is a video of my experience arriving at Etihad Stadium disabled parking all the way to my accessible seat.

Have you been to Manchester Etihad Stadium? If so, what did you think of the accessibility?