Last month we set off on a mini road trip to Aberdeen to see Joe Bonamassa at the Aberdeen Exhibition and Conference Centre (AECC). It was on Tuesday 13th March, so after finishing up at work in the afternoon we quickly headed off in hopes of beating some of the rush hour traffic. The drive up to Aberdeen was pleasant and unusually quiet, which was nice. Allan has been a Joe Bonamassa fan for around 15 years and has seen him perform live a few times in Glasgow so he was really keen for us to go see him at AECC. I was a little uncertain if I’d enjoy it, but Joe Bonamassa and his band were fantastic. I’m now happy to share my AECC Aberdeen wheelchair access review as well as my thoughts on accessibility throughout the venue.

This was my first time attending a show at AECC so I was unsure of the booking process and whether it was going to be easy or not. Previous experience of booking accessible tickets at similar venues can be hit or miss. High demand shows can be near impossible to get accessible tickets for as I experienced when trying to book tickets for Adele at The SSE Hydro.

I had a look on the AECC website and found the accessibility page. At the bottom, it advises calling the Ticketmaster Accessible Seating line on 0800 988 4440. To my surprise, I got through reasonably quick and managed to secure an accessible ticket and a free PA/carer ticket. Success. Although, this is probably unlikely to happen if trying to get accessible tickets at AECC for extremely popular bands like Little Mix etc.

As we were staying at Park Inn by Radisson Aberdeen hotel we only had a 15-minute drive to the venue. I called the AECC a few hours before the doors opened to find out what the stage times were. We had a three-hour drive from home to Aberdeen and we wanted to get checked in and have some dinner at our hotel before heading to the gig. The AECC were unable to tell us stage times, so we had to guess and hope we didn’t miss the start of the show. It was ideal how close our hotel was to the AECC and luckily the traffic wasn’t bad either.

We arrived at the AECC and immediately approached a car park steward who advised us where the disabled parking bays were. Blue badge holders are able to park for free at the front of the venue. It is on a first come basis. There aren’t many blue badge spaces so if you are unable to park in one, then it’s advisable to find another space and display your badge before leaving your car so you don’t get a parking ticket. The west entrance is very close to the blue badge parking (as you can see in the photo below). 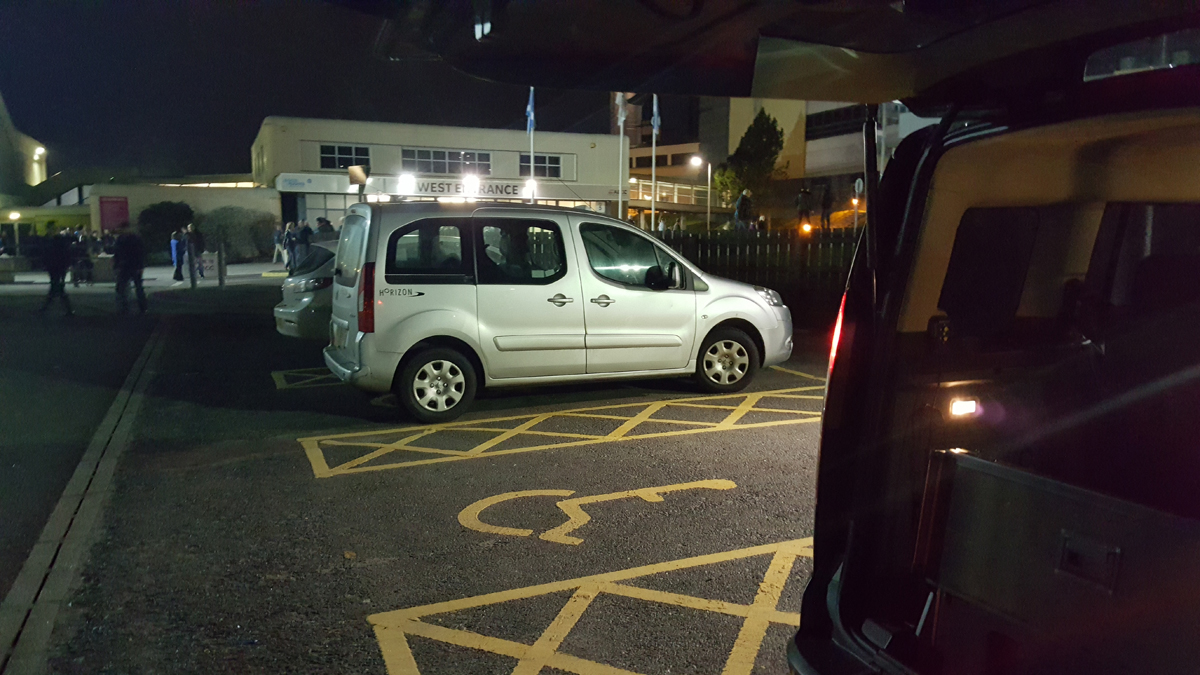 As we made our way to the main entry doors a steward approached us to check our tickets and let us through. There are three doors and each had a steward standing inside. 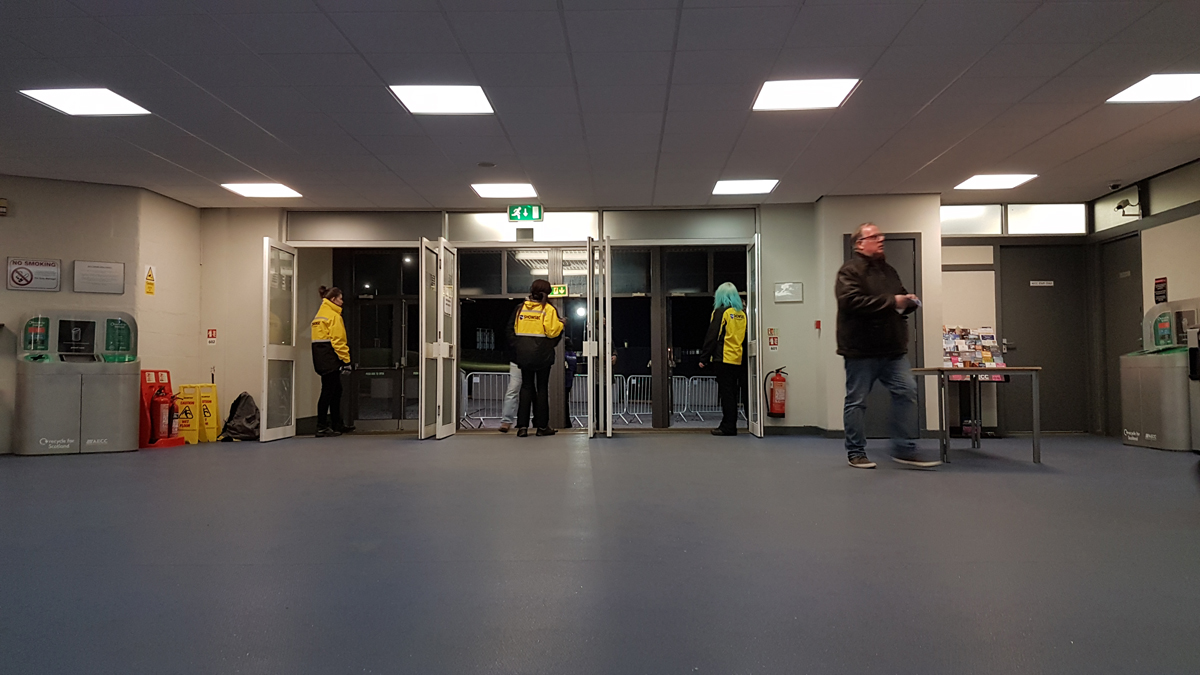 It was fairly spacious and relatively empty inside. There weren’t many people standing about. It can sometimes be quite intimidating when entering a busy venue as a wheelchair user especially being so low down. You are also at the perfect level to be hit in the head with wandering arms, elbows, handbags or worse, alcohol. 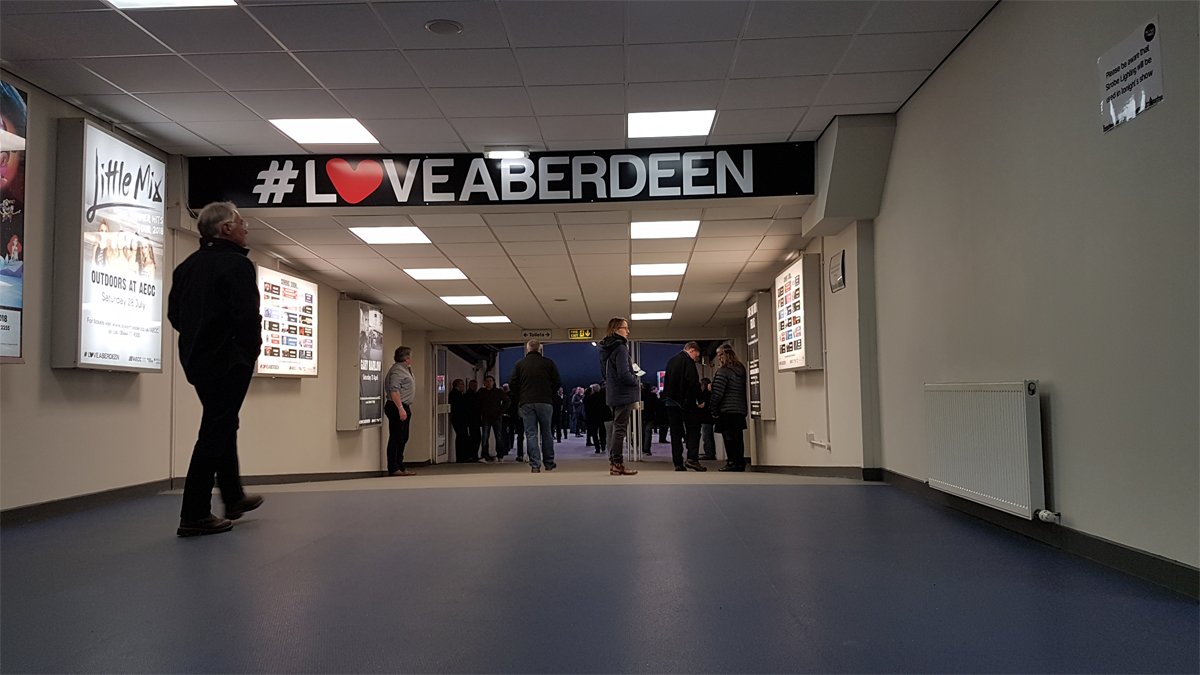 We then headed towards the main hall where Joe Bonamassa would be performing. There is a gradual slope down towards this area and through some more open doors. Just to the left of these doors is an accessible toilet, which I’ll come back to in a little bit.

We didn’t know where our seats were so one of the stewards pointed us in the right direction, which was towards the front of the hall (BHGE Arena). As with a lot of venues, the accessible seating is usually at the back, but amazingly that wasn’t the case for the Joe Bonamassa gig. As it was a seated show the accessible seating was in the front row. There is a viewing platform at the back of the hall when it is a standing show.

It was such a great surprise to be seated in the front row for a change and I don’t think I’ve ever sat so close to the stage at such a venue. We loved being so close and seeing Joe Bonamassa and his amazing band perform.

I’ve spoken about Attitude is Everything in several other blog posts in the past and they do amazing work to improve deaf and disabled people’s access to live music. So it was great to see that AECC supports and joined Attitude is Everythings ‘Charter of Best Practice’ and currently holds the Bronze award. Well done AECC. More venues should be getting involved and work towards improving disabled people’s experiences at live events as well as changing attitudes and raise awareness.

There are accessible toilets throughout the venue, but before leaving we checked out the nearest accessible toilet to us. I didn’t actually use the toilet but had a look inside. It was a good size but could be bigger. There wasn’t space next to the toilet for wheelchair transfers, so this could be an issue for some wheelchair users.

There were both fixed and pull-down grab rails. I was pleased to see it was clean and tidy, which can be unusual at the end of a gig. Unfortunately, there are no changing places facilities in the AECC. I did contact them and they advised that a changing places toilet will be incorporated into their new venue which is coming in 2019. Brilliant news.

Joe Bonamassa is a blues-rock guitarist from New York. Not only is he a guitar icon, but he is a singer and songwriter. Incredibly talented and having started his musical career at the age of 12 years old opening of the legend that is B.B. King, he has become a legend in his own right and number one blues artist in the world. The talent doesn’t start and end with Joe himself. He has an insanely talented band with him including a bass player, sax and trumpet combo, two female backing singer, drums and Hammond organ. A star-studded lined up. 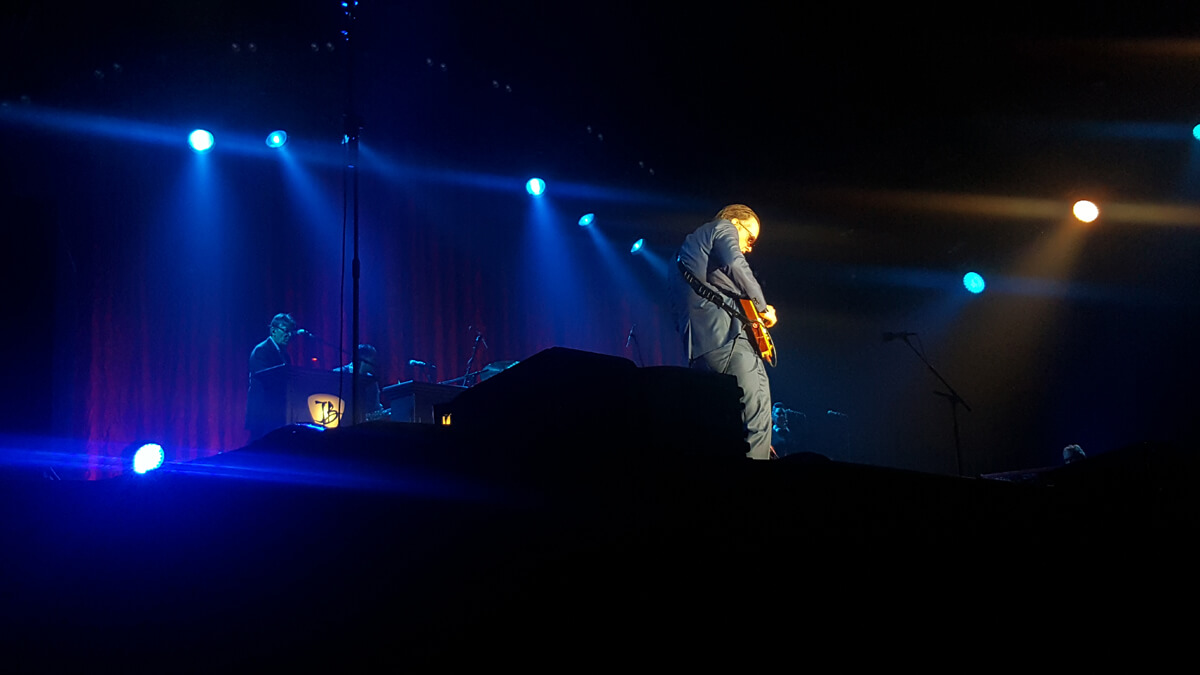 Having never seen Joe Bonamassa perform live before I wasn’t sure what to expect, but I didn’t have to wait long as he appeared on stage at 8pm and blow us away with his performance. He always performs looking dapper in a suit and sunglasses. Opening with four brand new songs before leading into some old favourites. The show lasted two hours and ended with ‘Hummingbird’, which had everyone lapping it up. If you haven’t heard or seen Joe Bonamassa before then I recommend you give him a listen. Joe also has a new album coming out this year, so I’m sure he will be back over this way soon. We will no doubt go see him again when he does come back. Next time my Dad will be coming with us as he is also a fan.

My first visit to AECC Aberdeen was amazing and was way better than I had expected. I loved being in the front row and having a great view of the stage. Accessibility around the hall and venue was straightforward and the staff were helpful. I would definitely attend a show at AECC again. I may even occasionally favour travelling to this venue over attending closer venues. I’m looking forward to attending a show at the new AECC, which is going to be a lot bigger and better.

Have you been to AECC before? Are you a Joe Bonamassa fan?