Part 4 of ‘Disabled and the City’ began when we woke on Sunday morning and once we were ready and the last of our things were packed away in the case, we ventured out to make the most of our last few hours in the city. We got a bus down to Union Square as there was a few things we wanted to do in that area before we left. First off being a look around Fishs Eddy. They sell dinnerware, flatware, glassware, gifts and lots of quirky bits and bobs. One of the store assistants put a portable wheelchair ramp down to help me into the store because there was a steep step, which my wheelchair wouldn’t be able to climb. We spent a while looking around at all the cool items. We managed to spend $90 easy on our purchases which included cat glasses, cat mug, New York magnets and more. If you are ever in the Gramercy Park/Union Square area definitely have a look around Fishs Eddy, you won’t leave empty handed that’s for sure. 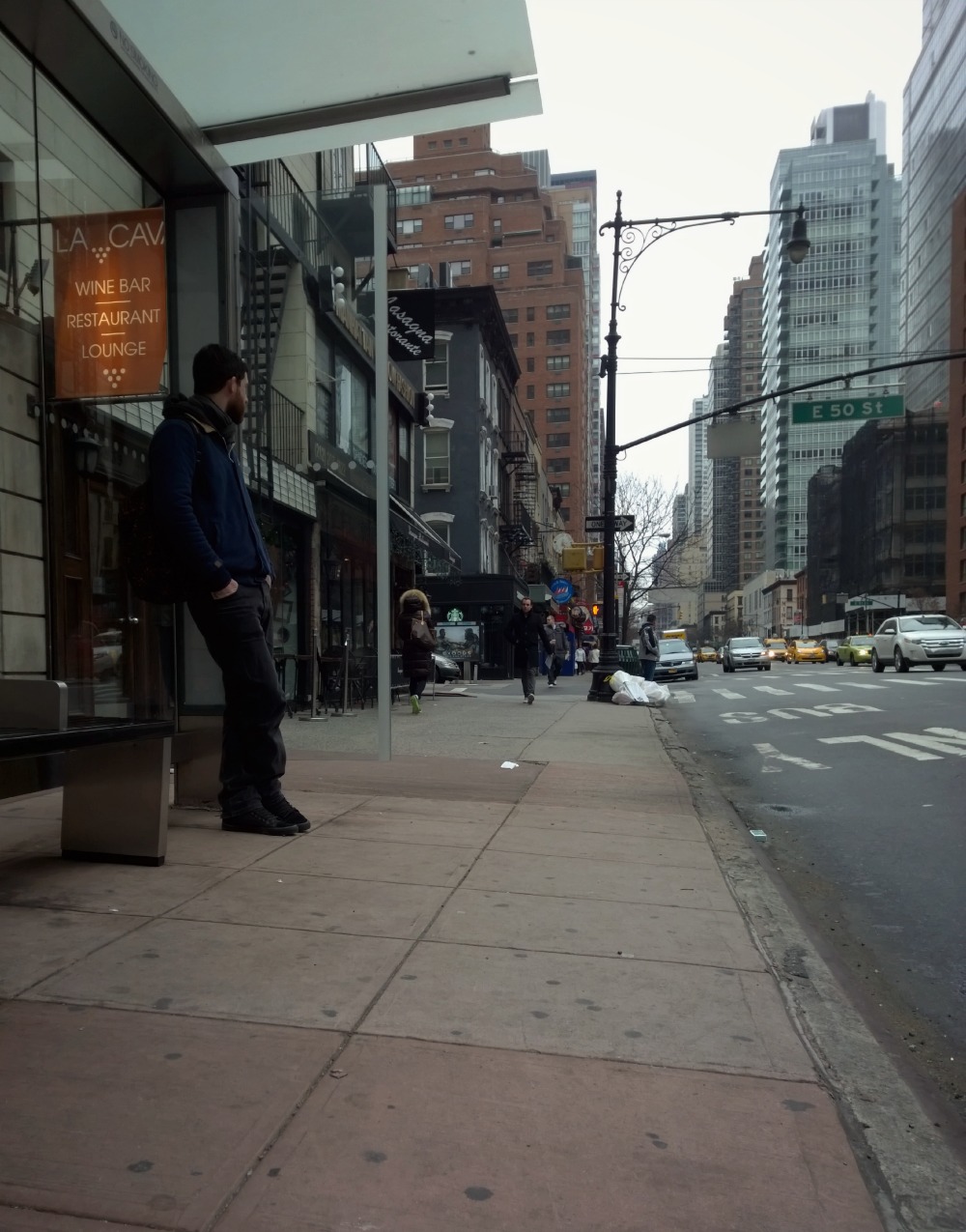 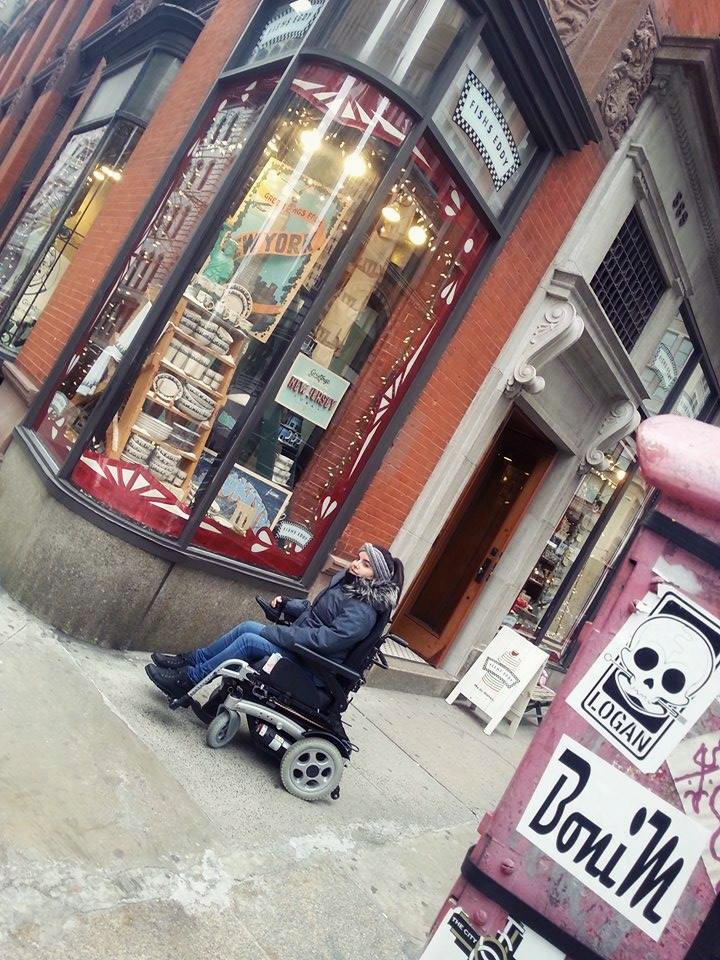 Since we love Heartland Brewery restaurants so much we decided to go for lunch at one which was right across from Union Square. This was our last meal in New York so we wanted to go somewhere we knew would be good. Apparently this was the very first Heartland Brewery. There was a Christmas market in Union Square as well, but we weren’t too fussed about having a look around as we soon realised once you’ve been to one or two Christmas markets, you’ve been to them all. There was a really cool artist called Tina Trachtenburg in Union Square. She had a very bohemian look and vibe. At first she reminded us of the pigeon lady from Home Alone 2. She makes pigeons sculptures and puts them on display around New York. Allan loved the idea and even though they weren’t actually for sale, Allan offered her $40 for one. She was thrilled, but also sad to see one go, she gave it a hug and noted in her book that it was coming to live in Scotland. We called him Paul. Duane Reade was right across the street from the market and I really wanted to do some last minute make-up shopping before heading to the airport. Duane Reade is a pharmacy and convenience store chain and they are great for make up. I bought lots of make-up from different brands including theBalm, Covergirl, Maybelline, Milani, Jordana, Almay and a few skincare products from a great brand called 100% Pure. The store assistant even gave me some free samples. 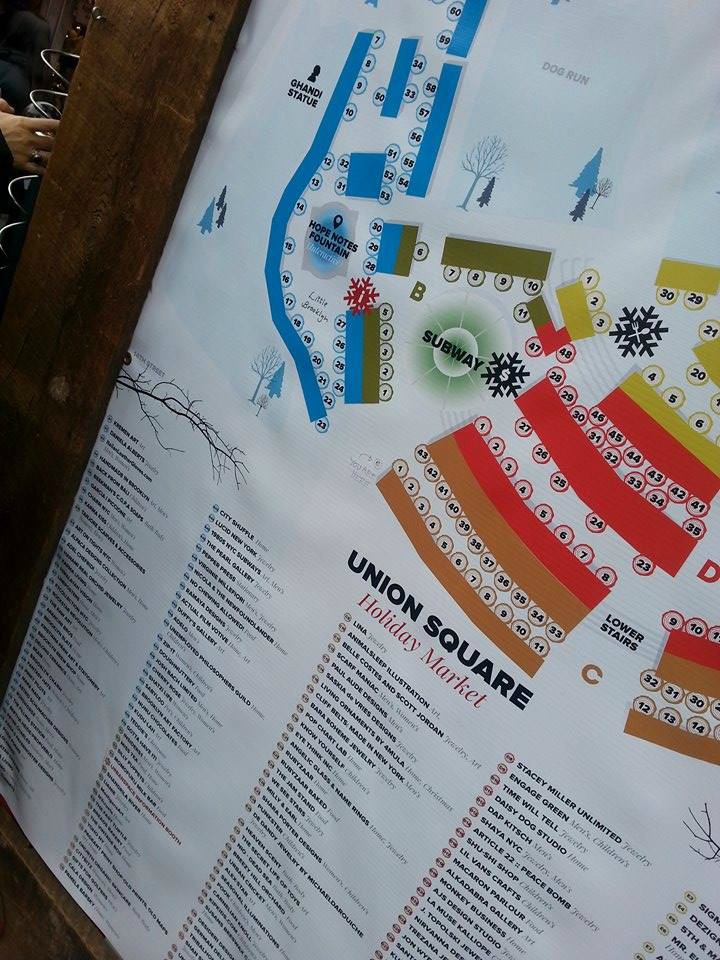 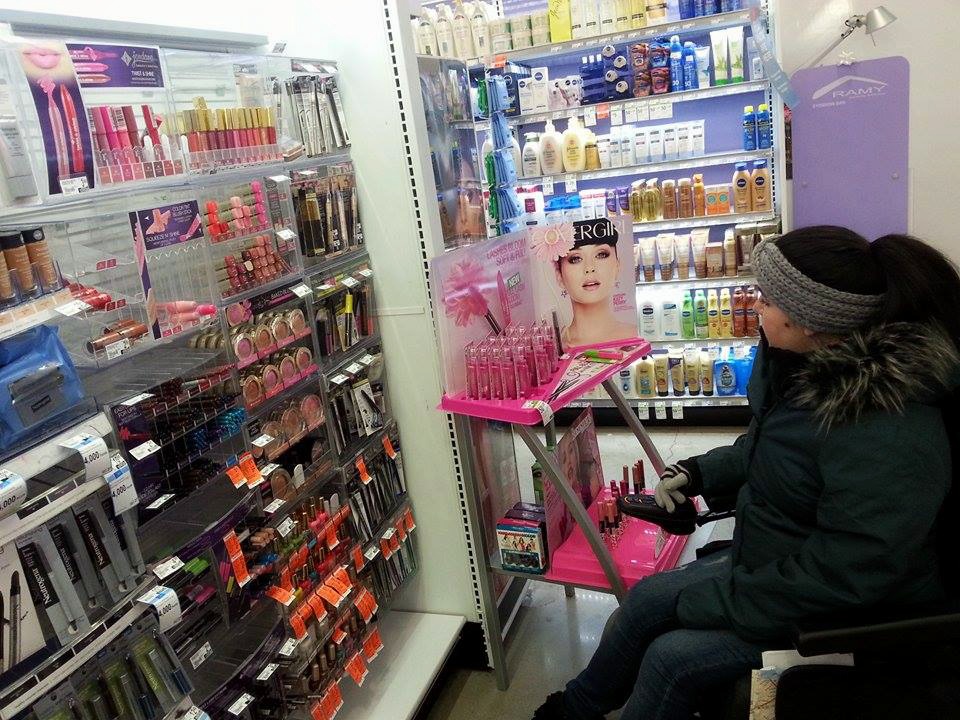 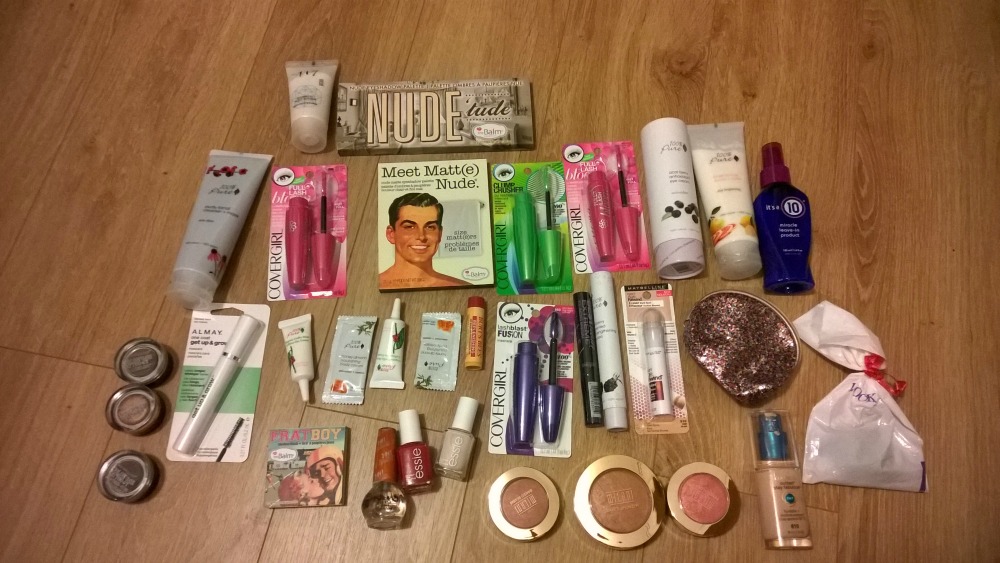 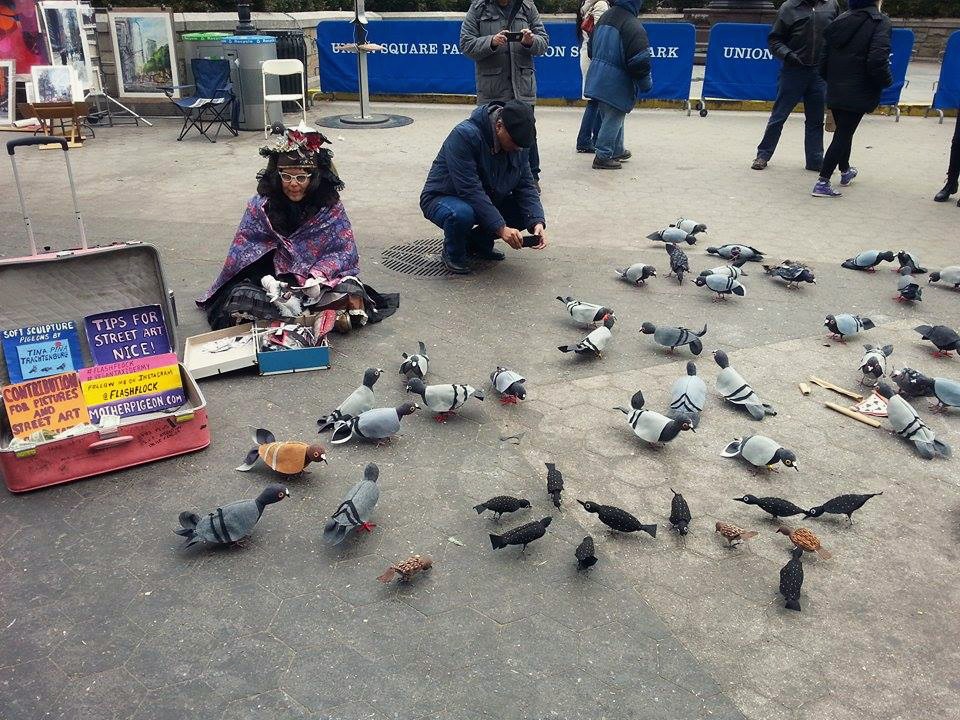 We headed back to the hotel to wait for our taxi to take us to the airport. Check-in went smoothly and we were reassured everything was in place regarding my wheelchair and special assistance. We had a few hours wait in the airport until our flight so we had a wander around and got something to eat. Finally when it was around time to head to the departure gate we got chatting to one of cabin crew who is from the UK too. She was really nice and said she would keep an eye open for us on the flight. Special assistance arrived to escort us and assist in getting me on the plane. She had a very rude manner and I didn’t appreciate the way in which she spoke to me when I told her I couldn’t walk onto the plane when she asked me. She said it with total disgust and acted like I was a massive inconvenience to her. All because she thought I could easily walk onto the plane, but instead I would need transferred into an aisle chair and lifted into my seat on the plane. This was all noted in the paperwork, which she clearly didn’t bother to read. We told her she wouldn’t need to lift me or do anything as my boyfriend would do it all. I didn’t want her hands on me or for her to help me in any way after speaking to me in such a horrible way. I’ve never experienced an attitude like that from anyone in an airport before. It was a relief when we were in our seats and ready to take off.

Our flight out of New York was slightly delayed so we were preparing ourselves for missing our connecting flight when we landed in London, and that’s exactly what happened. We missed the flight within minutes and there was no way we could get through security and to the correct departure gate in time. Heathrow airport is huge. We were told the next flight would be in two hours. Exhausted from being up around 30 ish hours, we sat waiting and waiting and waiting, every so often be told the flight was delayed again. In the end we were delayed 5 hours in Heathrow and got told we wouldn’t be given our original bulkhead seats because no one was willing to switch for the 45 minute flight. The bulkhead seats are more convenient especially if you are disabled and need a bit more leg room as it helps when getting lifted in and out of the seat. The special assistance took us down to the plane door and the dispatcher was shocked to see me and even more shocked when she asked if I could walk and I said no. This was the second person to have an attitude to the fact I couldn’t walk. She wasn’t expecting a “carry on” passenger as they call it (someone needing lifted into their seat). We soon realised we were brought down to the wrong plane. This flight was headed to Geneva not Edinburgh. My heart sank. I could not believe this had happened. By this time I was in a lot of pain from sitting on the plane from New York for 8 hours and then sitting on a really uncomfortable airport wheelchair (if you’d even call it a wheelchair) for 5 hours. I kept having visions of my comfortable wheelchair sitting all alone and empty. They told us our Edinburgh bound flight was already boarded and ready to take off. I was dreading having to sit any longer in that airport for the next available flight. I was in so much pain that the thought of missing this flight as well at no fault of our own again made me burst into tears. It takes a lot for me to get upset like that, but pain and exhaustion took over. The dispatcher felt bad for us and quickly started phoning our flight to demand that they do not take off without us. She stopped everyone else for boarding her plane until it was all sorted and the other two disabled passengers heading to Edinburgh were taken off the plane too. We finally arrived at the correct plane and I had to be put through the embarrassment of getting wheeled backwards in those little aisle chairs to the back of the plane and then transferred with great difficultly into my seat. This was the last straw for us and we were desperate to get back home to Scotland. It was only a 45 minute flight, but I was still in a lot of pain and my legs were swollen. My Dad was waiting for us at arrivals and we just felt relief that we were finally home after a nightmare of a journey.

I have to admit this bad travel experience did put us off doing it again, but as the weeks have passed we have realised it’s not all bad and we managed to work through it even though it was very difficult at points. If I never went on holiday again I would just be giving into my disability and would not get to experience and see all the amazing places. Life is for living, so get out there and enjoy it. See and do as much as you can while you can. Planning is key for travelling and especially if you are disabled. There are a lot of things to consider and put in place for travelling, but it shouldn’t put you off doing it.

I hope you have enjoyed reading about our trip to New York and I’d love to hear about your experiences of travelling too. If you have any questions about anything I’ve mentioned or want more information about accessibility in New York please leave a comment or send me an email. You can read my first post on New York if you haven’t already. 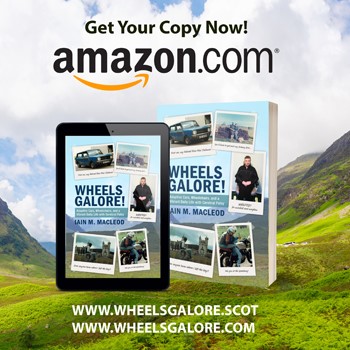