The Royal Yacht Britannia was built in Clydebank, West Dunbartonshire for Queen Elizabeth II in 1953. For 43 years it was The Queen and the Royal Family’s floating home, travelling over a million nautical miles all around the world before being decommissioned in 1997.

Britannia is now berthed in Leith, Edinburgh, where you can enjoy a complimentary self-guided tour and feel like a royal for the day. And that’s exactly what I did during a visit to the ‘Best Visitor Attraction in Scotland’. It just so happened that the day I visited was also the 2nd anniversary of Simply Emma, so it was a great way to celebrate, Royal style. 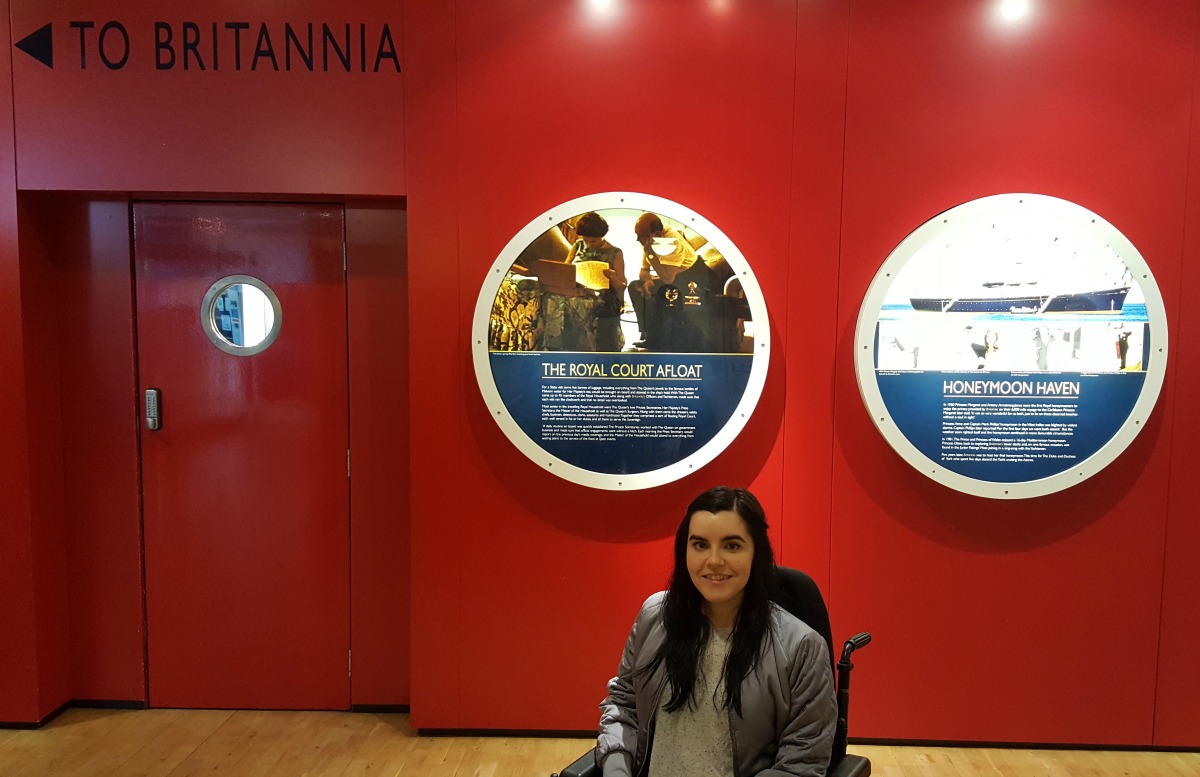 Tickets can be purchased at the Visitor Centre located on the second floor of Ocean Terminal shopping centre. Here you will learn about the history of HM Royal Britannia with displays and photographs of the Royal family throughout the years.  It was fun looking at the many photographs of the family enjoying their time together on the yacht, including the Queen, helping make Christmas pudding and Princess Diana with Prince William and Harry.

Once we had finished looking at the photographs we continued down the walkway where we were greeted by two Visitor Assistants who checked our tickets and got us set up with our audio handsets. I found the Visitor Assistants to be very attentive and aware that I may have difficulty holding and operating the handset, so they suggested a few alternatives instead. Since I can’t lift my arms up to hold the audio handset to my ear I was given headphones and the handset was attached to a lanyard and placed around my neck (see photo above). This meant I didn’t have to struggle with the handset or have someone hold it up to my ear each time the audio played. Just speak to the Visitor Assistants if you think you’d struggle with the handset or require headphones.

Accessibility on board The Royal Yacht Britannia

Armed with our handsets we made our way down another walkway to the lifts and headed down to level 3. None of us quite knew what to expect at this point, but we were all really looking forward to finding out.

Below is an external shot from inside the Visitor Centre showing you the walkway (on the right-hand side of the photo) and how it connects the lifts/stairways to Britannia. 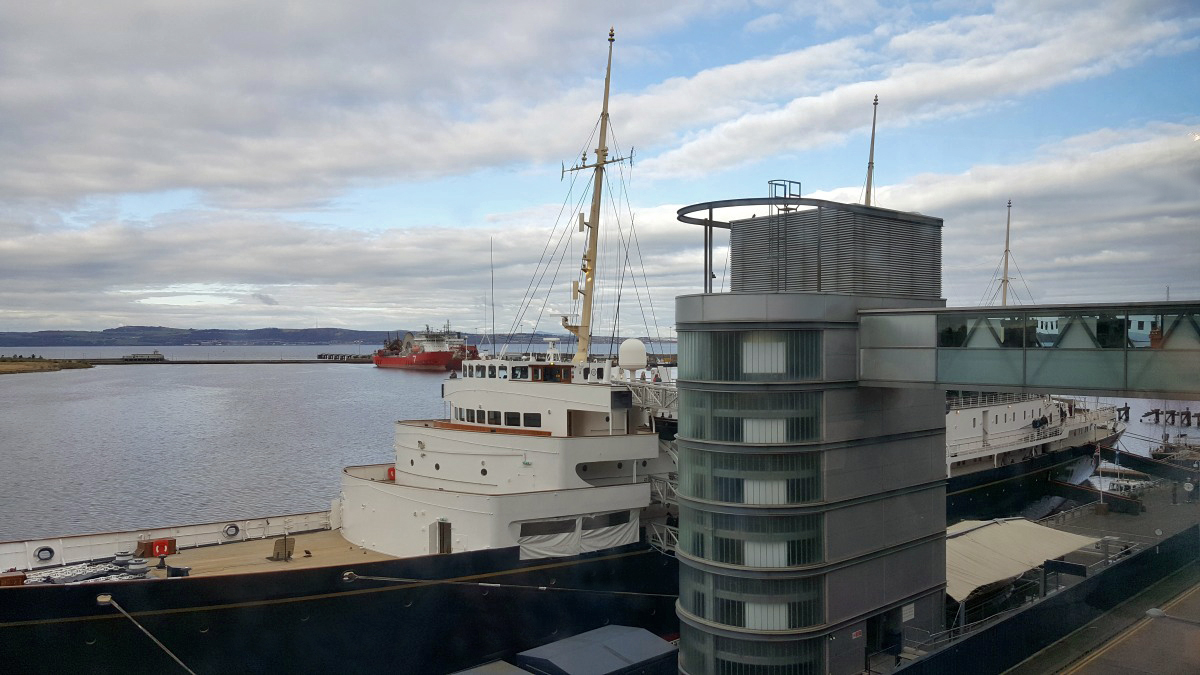 My 3-year-old nephew was a little unsure, to begin with since he was going on “a big boat” (his words) for the first time and after reassuring him that it wouldn’t move he began calling it a “pretend boat”. However, as soon as he stepped aboard his fears completely disappeared and our royal adventure began. 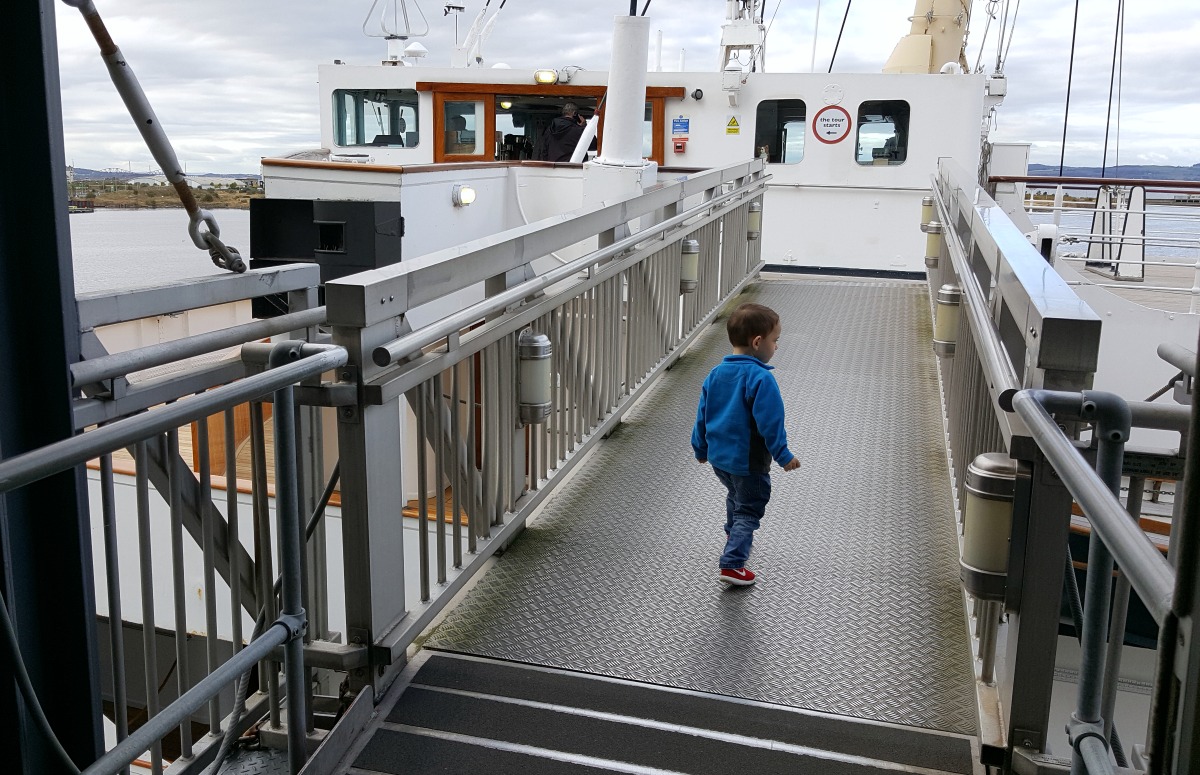 As I made my way across the gangway onto the deck I noticed how flat it was. I always thought boats and wheelchairs weren’t a good match, but here I was on the Royal Yacht Britannia and there were absolutely no barriers to wheelchair accessibility at all. 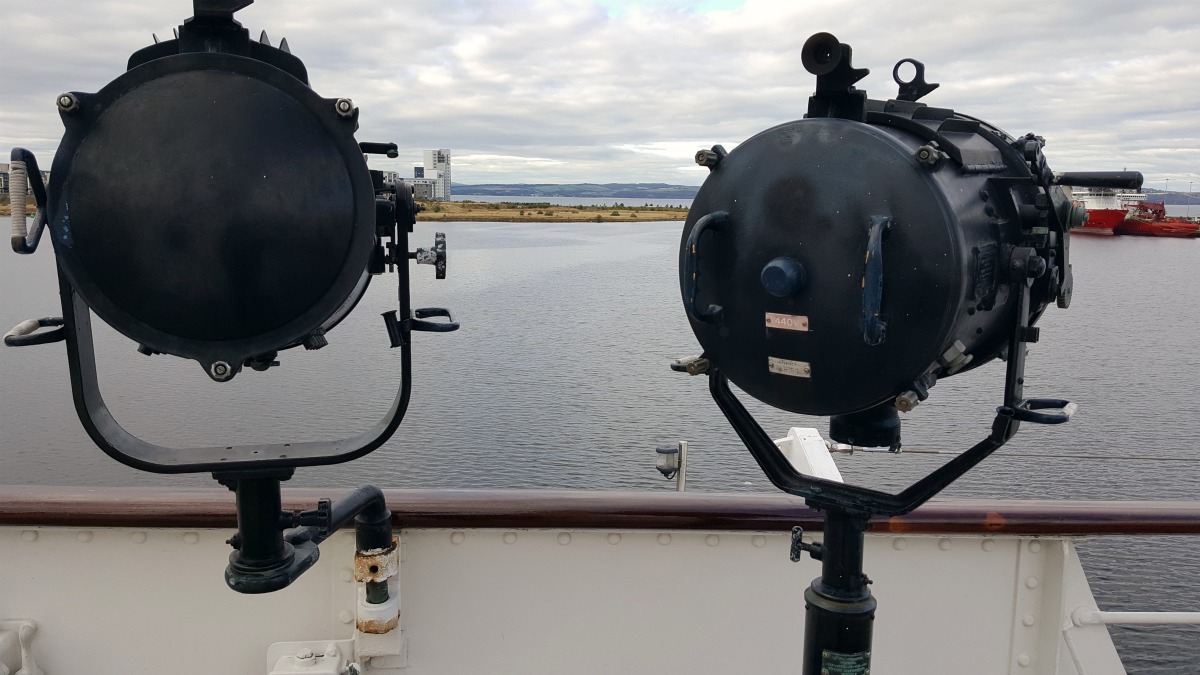 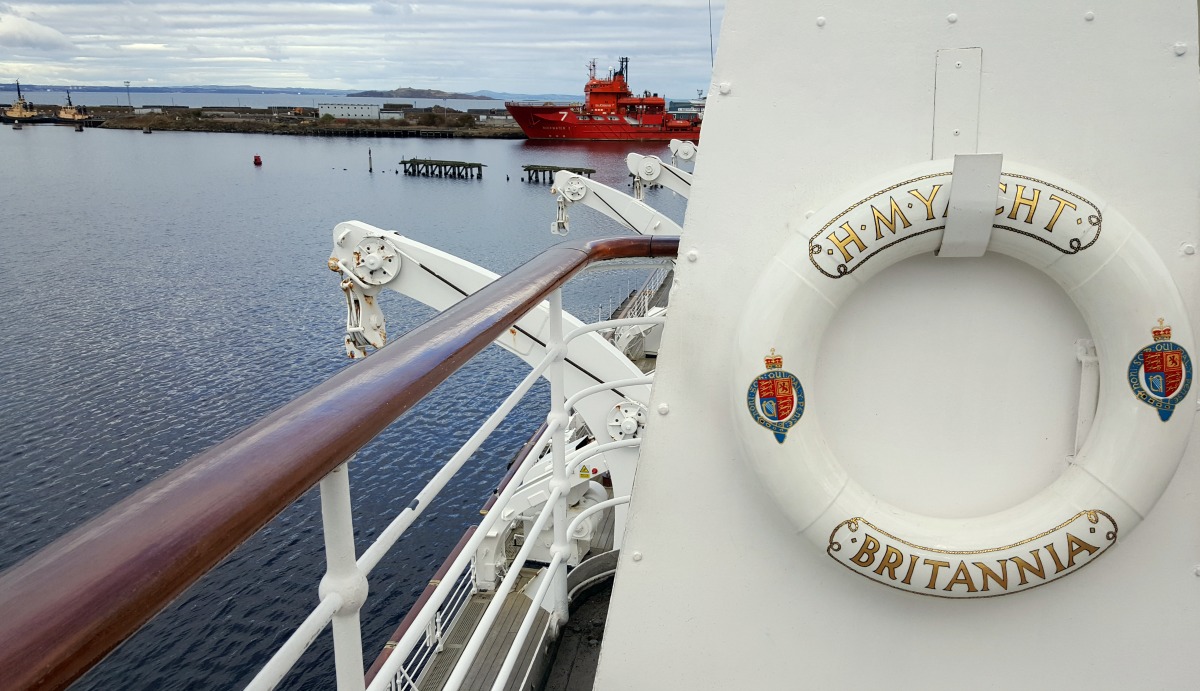 The tour starts on the top deck and the view from here is lovely. It’s great for watching all sorts of ships come and go from Leith Docks with the beautiful mountains in the background (you might even spot The Forth Bridge). 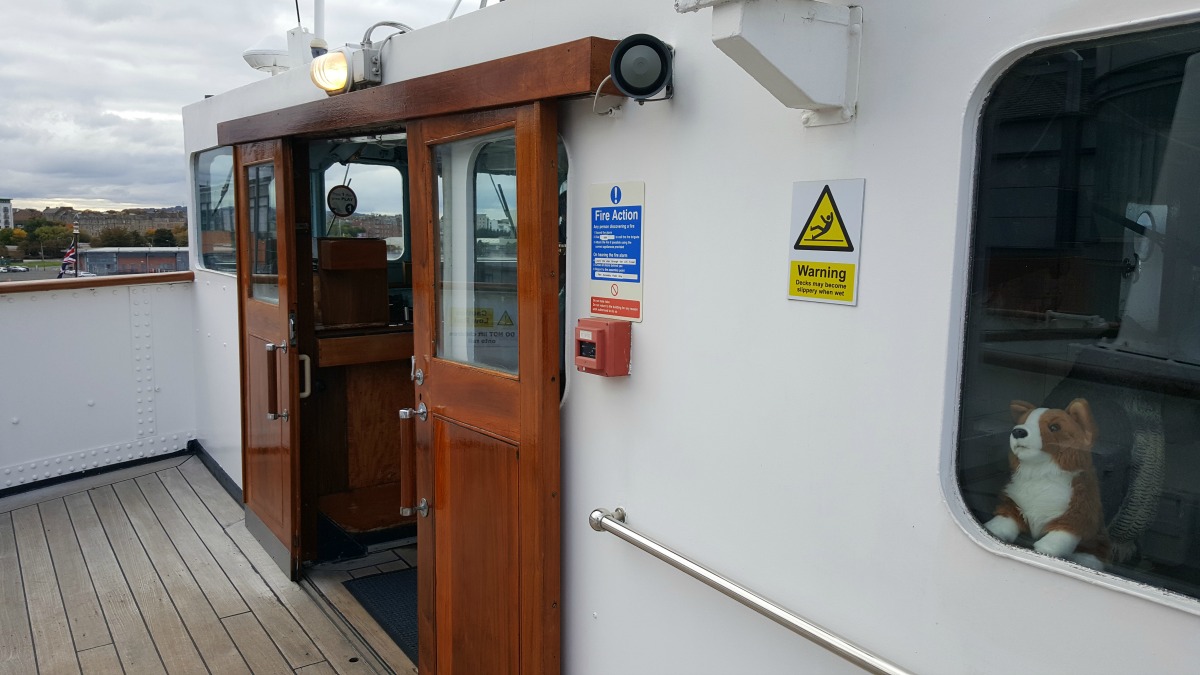 The Bridge was the most important area on Britannia, where the Captain, Commanding Officer and Rear Admiral would command and control. Level access meant I could roll easily into The Bridge (as you can see in the above photo). 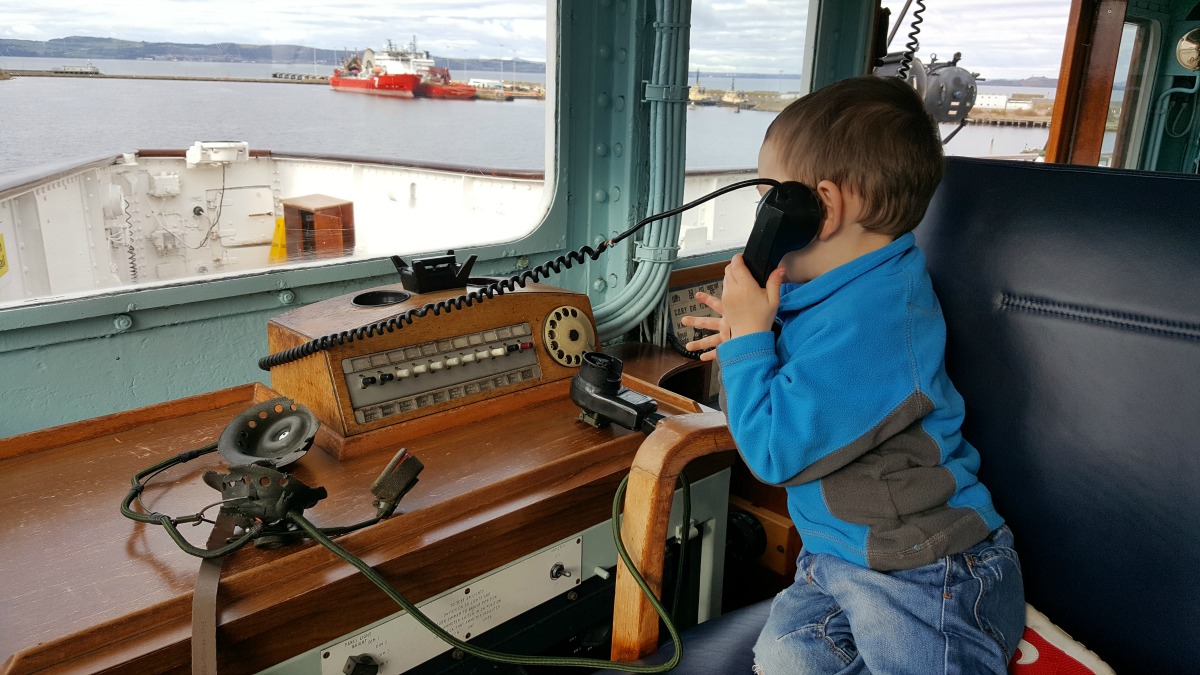 The steering wheel was controlled by the Yachtsmen on the deck below in the Wheelhouse. The Yachtsmen could not see outside so they were given orders by The Bridge through the voice pipes. My nephew had fun shouting down the voice pipes and pretending to be the Captain. 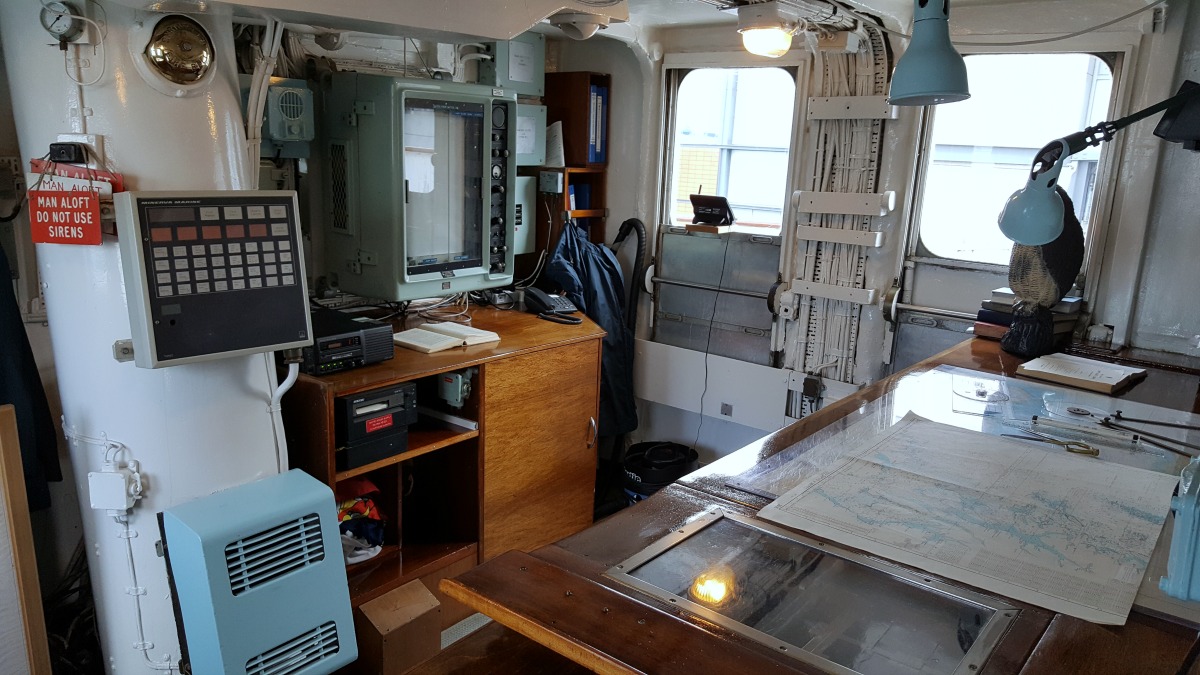 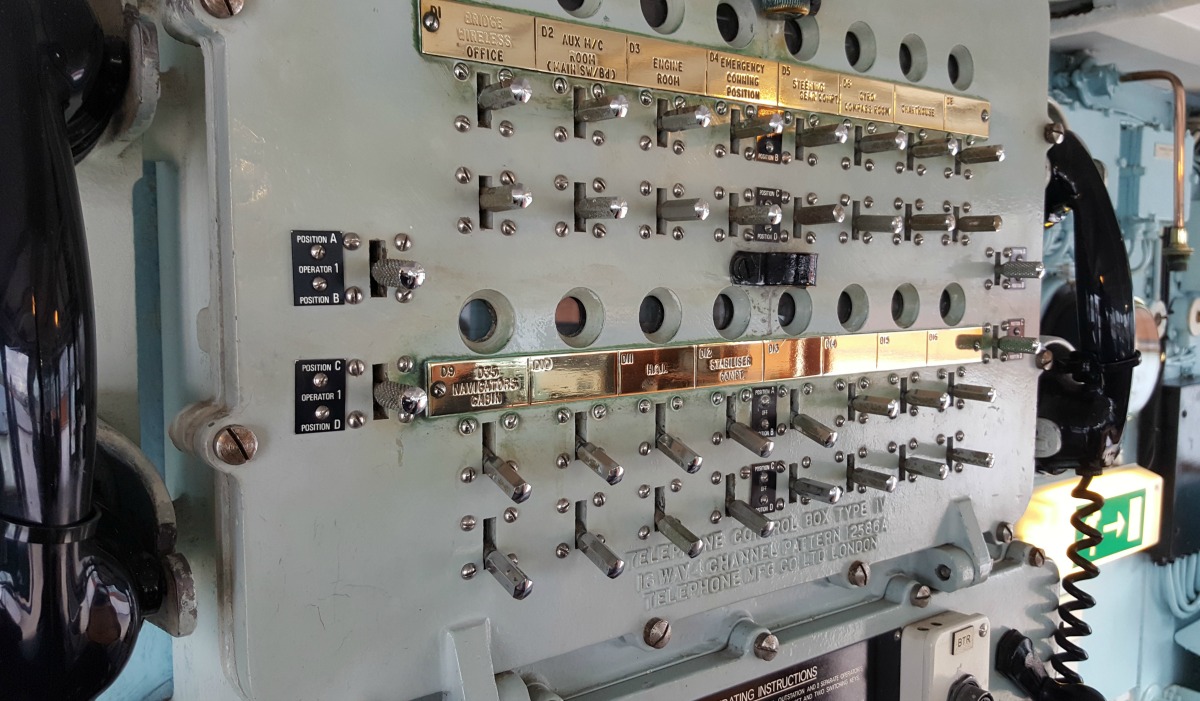 It was great to see all the original equipment and hear audio recordings of the crew working onboard The Bridge. We found it really interesting and it was possibly one of my nephew’s favourite areas onboard and our tour had just begun.

The tour then led us to level 2, which we accessed by using the same lift as before. Level 2 is the Admiral’s Quarters and the Royal Bedrooms. Here we saw The Queen’s Bedroom with an interconnecting door through to Prince Philip’s bedroom and The Honeymoon Suite which was once used by Prince Charles and Princess Diana. 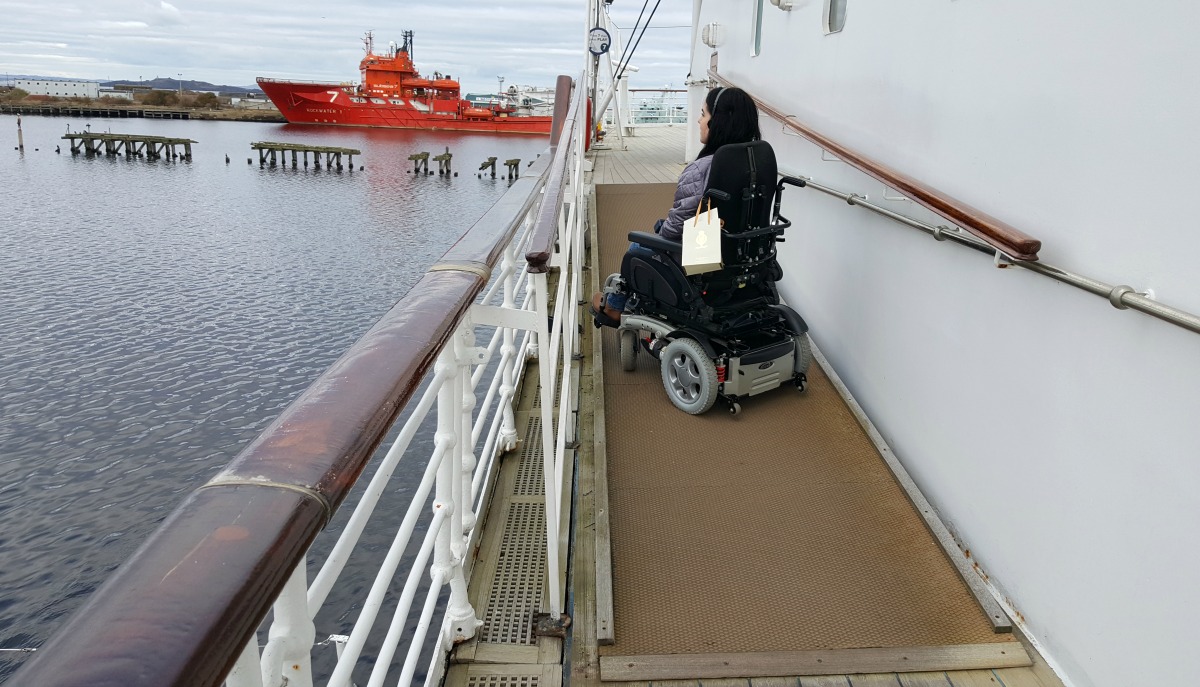 Before reaching the Royal Bedrooms we passed through the Verandah Deck, which is completely wheelchair accessible via a gentle ramp. This is where the Royal family spent a lot of their time sunbathing and the children played in an inflatable paddling pool. You can even ring the Ship’s bell there! 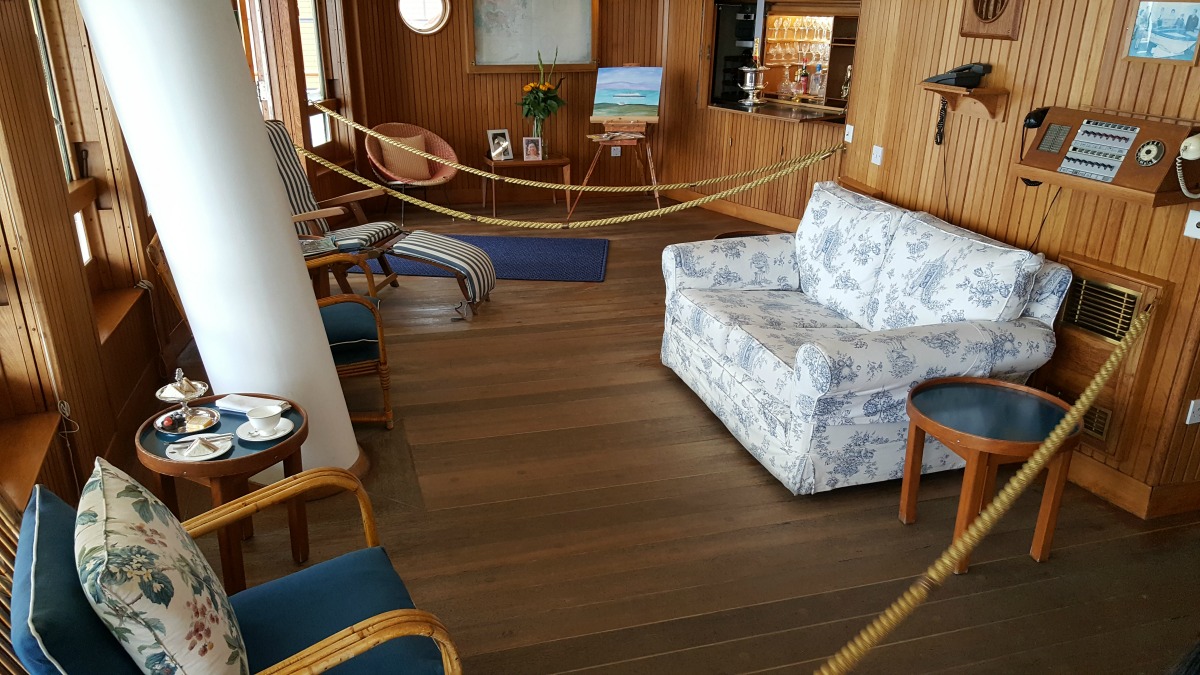 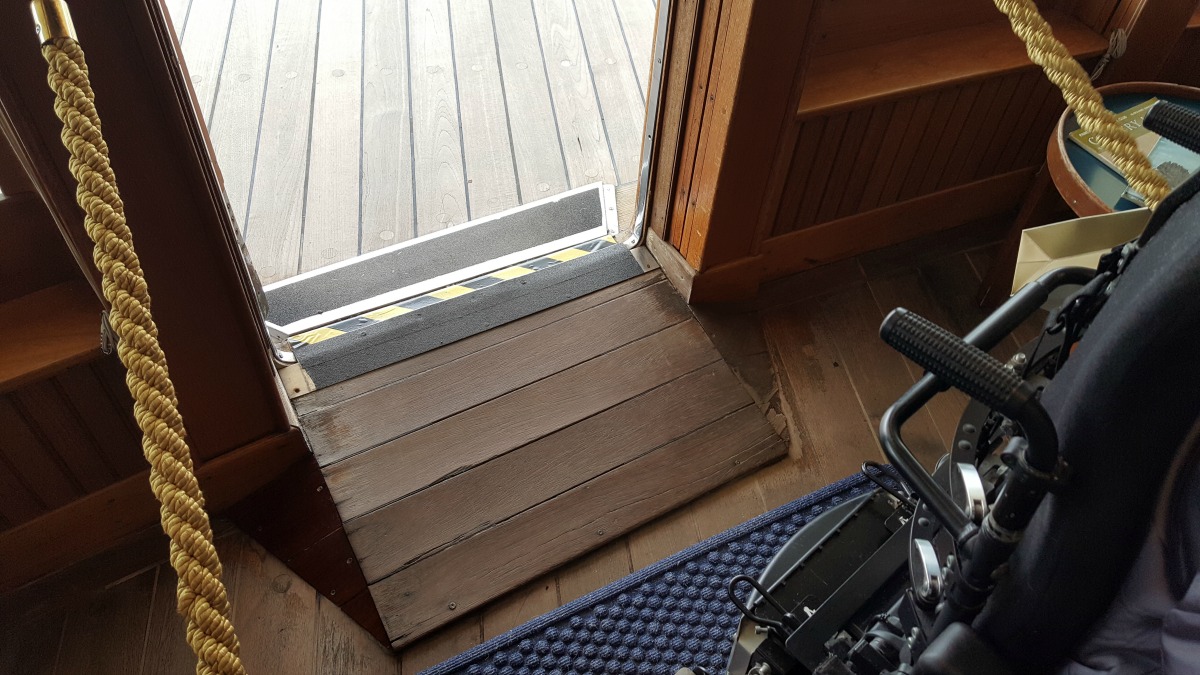 From the Verandah Deck, you then enter Queen Elizabeth’s favourite room on Britannia, The Sun Lounge. A small wooden ramp across the door threshold allows easy access for wheelchair users. The Royal Family enjoyed many family breakfasts, afternoon teas, games and music in this little room throughout the years.

Next up was the Royal Deck Tea Room for tea and cakes, which we entered via one of Britannia’s original lifts within the Royal Bedroom area. The lift was small inside, but there was enough space for myself, two adults (one being a member of staff operating the lift) and my nephew. The Tea Room was lovely and warm, a welcoming break from the cold outside. It was beautiful inside with an equally beautiful view across the water. There is also an accessible toilet here. 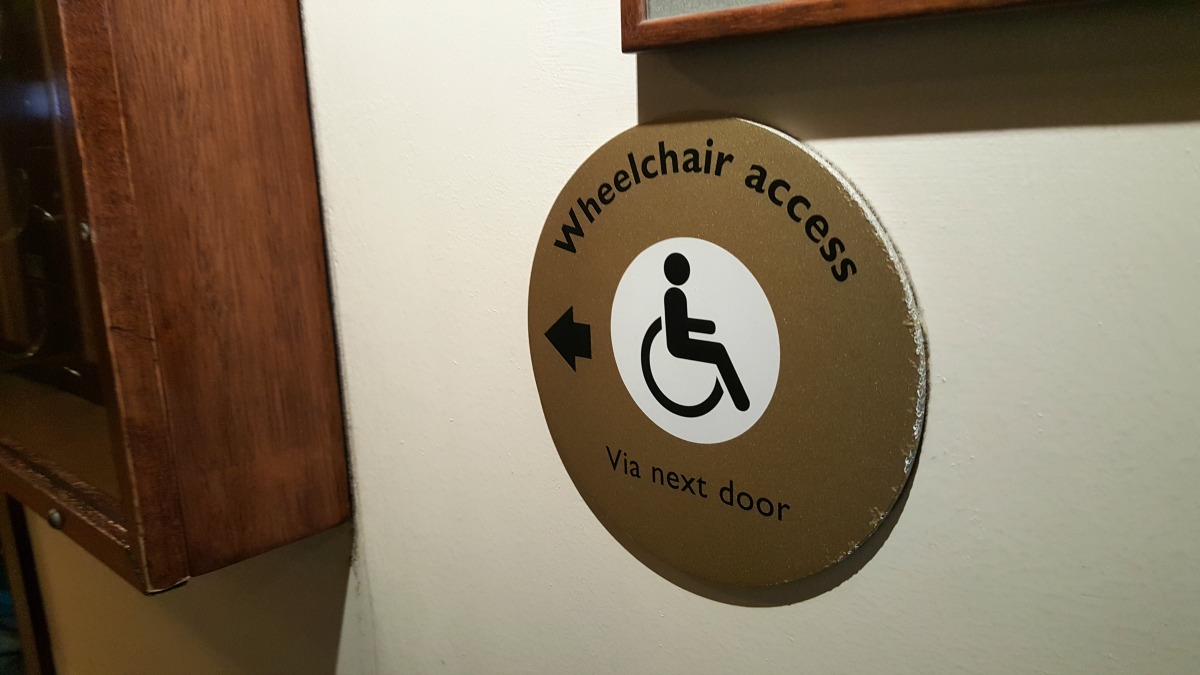 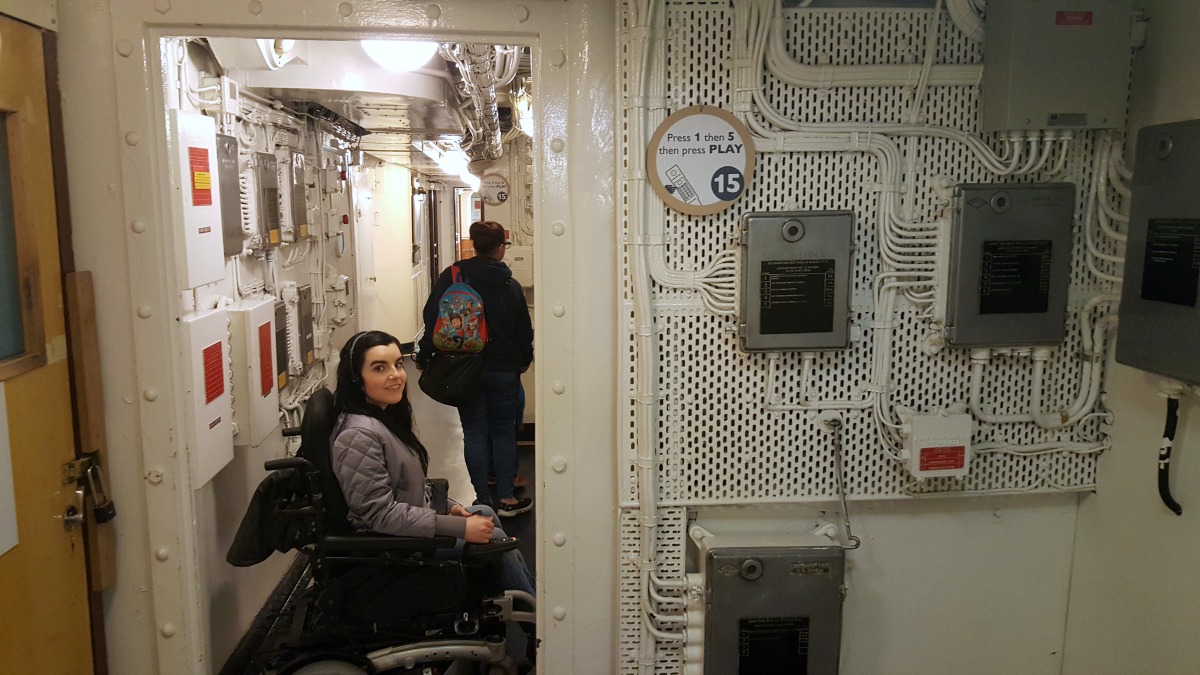 After enjoying our tea and cakes we headed across the gangway and took the lift down to level 1. Here we got to see where the Officer’s would relax with a few drinks in their lounge and where they would eat in their dining room. I was surprised how accessible below deck was as I had no problems manoeuvring my wheelchair through the corridors. I’ve never been at this level of a ship before so it was exciting being able to look around and wonder how everything worked. 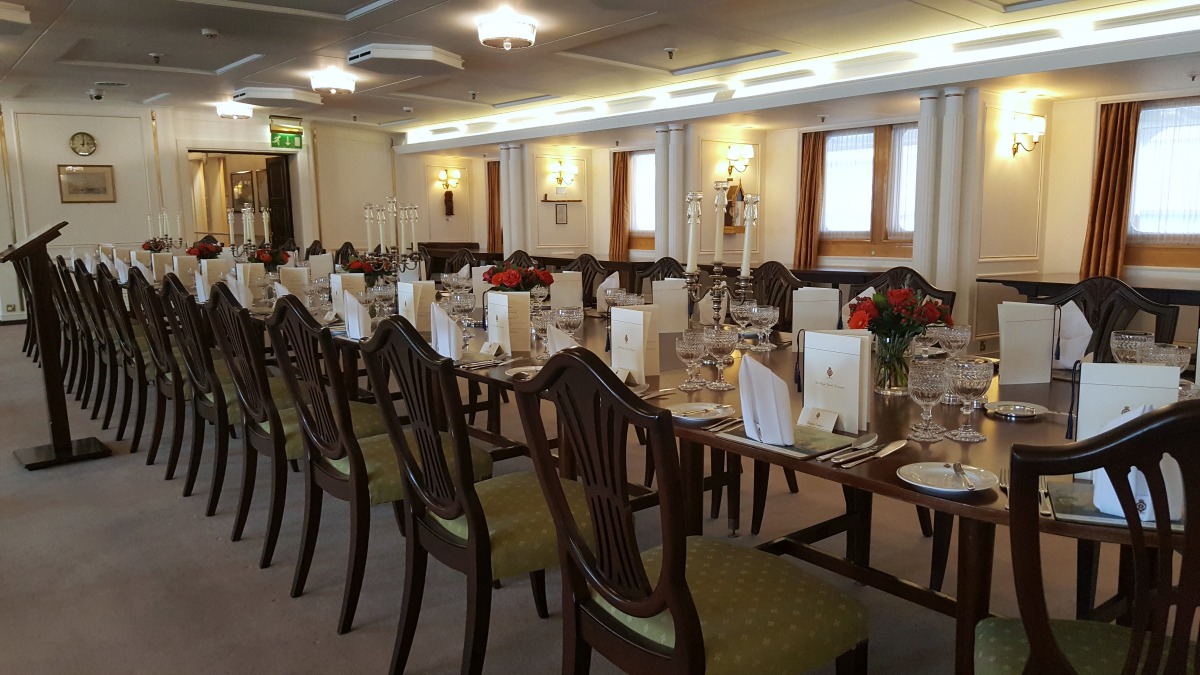 The State Banquet Room was impressive and was where Her Majesty would entertain world leaders and celebrities, including Nelson Mandala and a whole host of King’s and Queen’s. 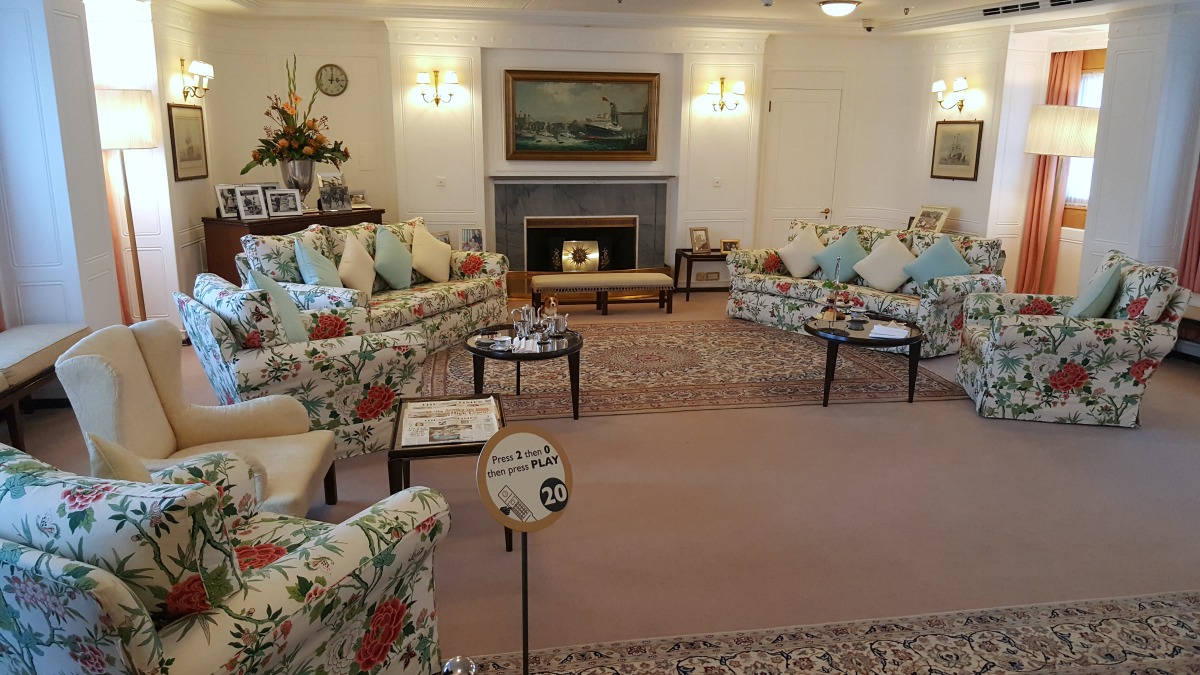 This led us nicely onto The State Drawing Room, which was used for entertaining, relaxing, playing games and even the baby grand piano. It was nice and bright in this room, but I could imagine it being very cosy at night with the fire burning.

Below deck was the Crew’s Quarters, NAAFI Sweet Shop and Engine Room. There was a bar for the Junior Ratings, where my Nephew learned to pour his first pint (I don’t condone underage drinking…it was just a little fun haha). 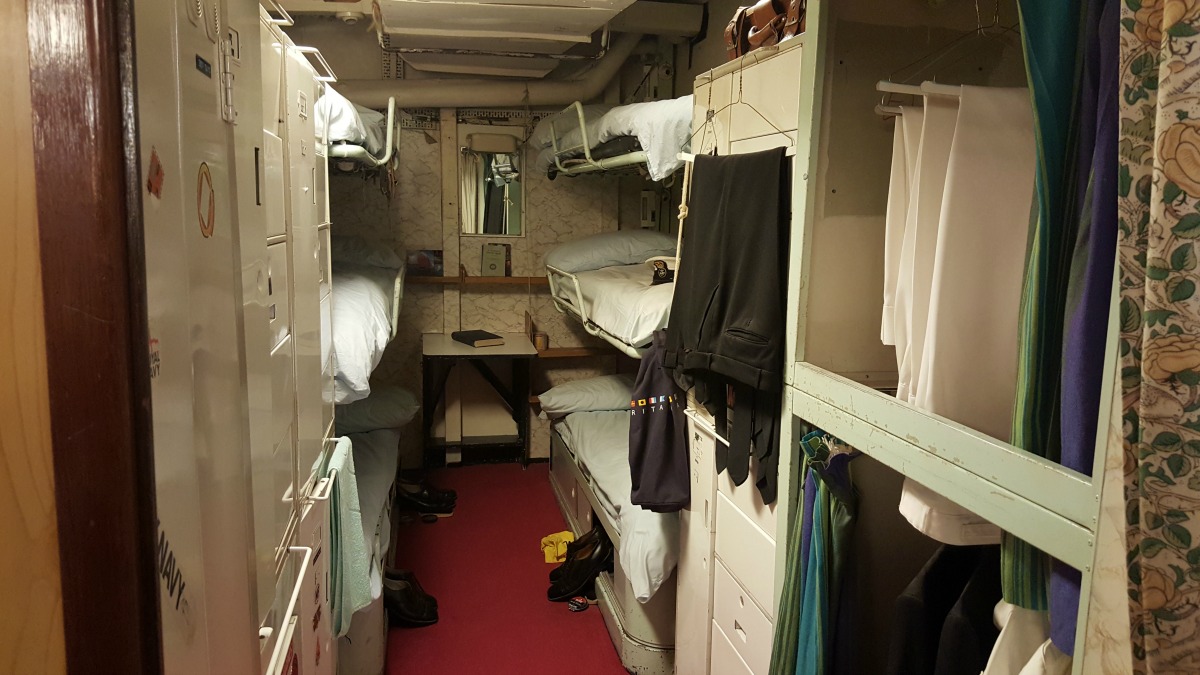 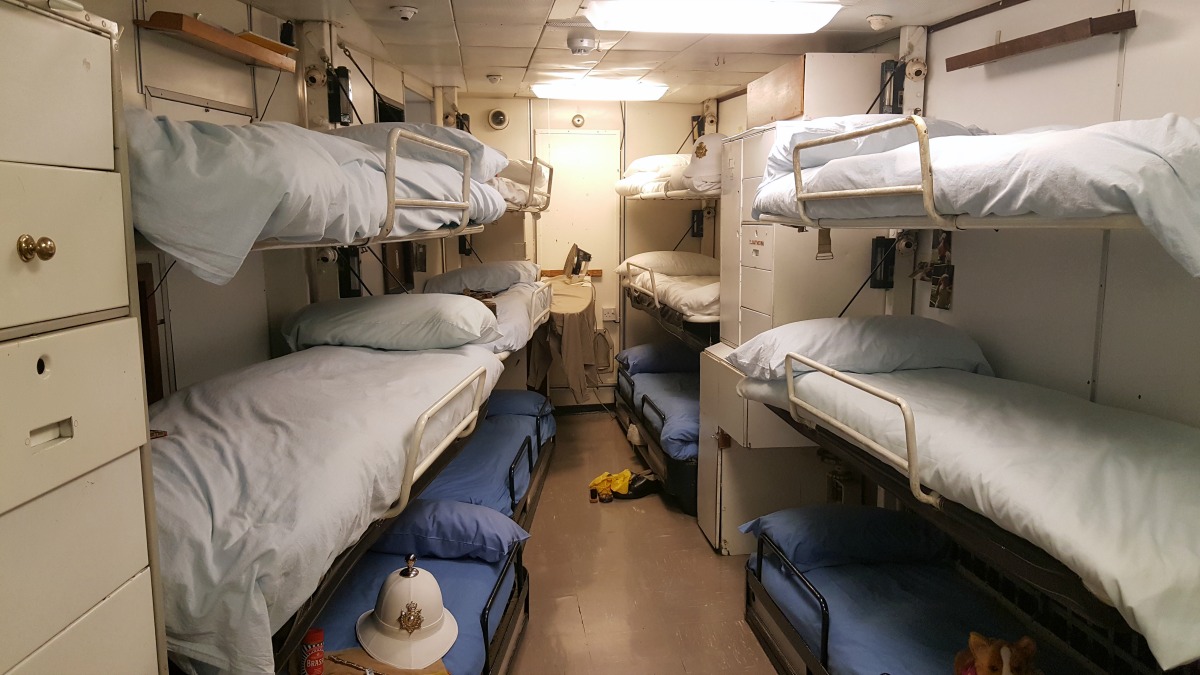 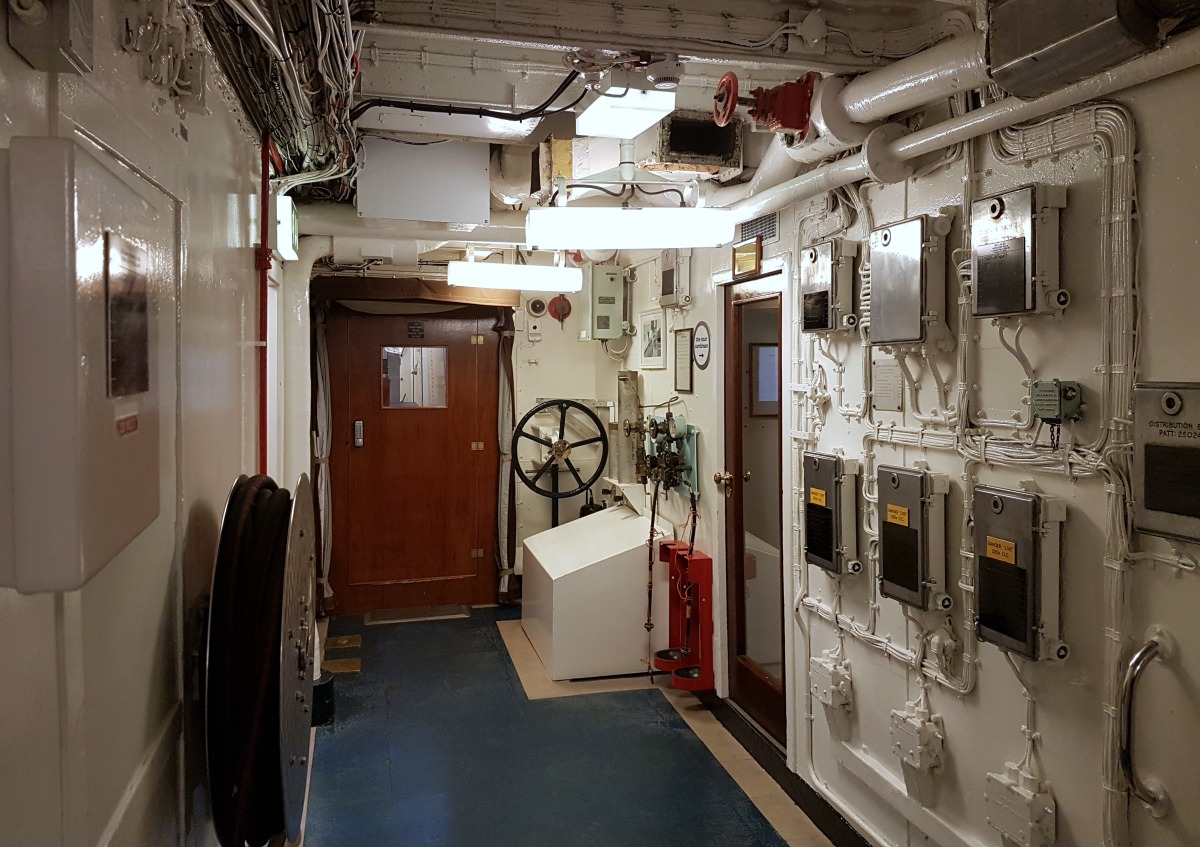 The sleeping area for the crew was very small and the beds didn’t seem big enough for grown men. The crew were expected to be clean and well presented at all times, so the laundry room was used regularly as well as making sure their uniforms were ironed and shoes polished. Again, I was very surprised that this whole area was wheelchair accessible. 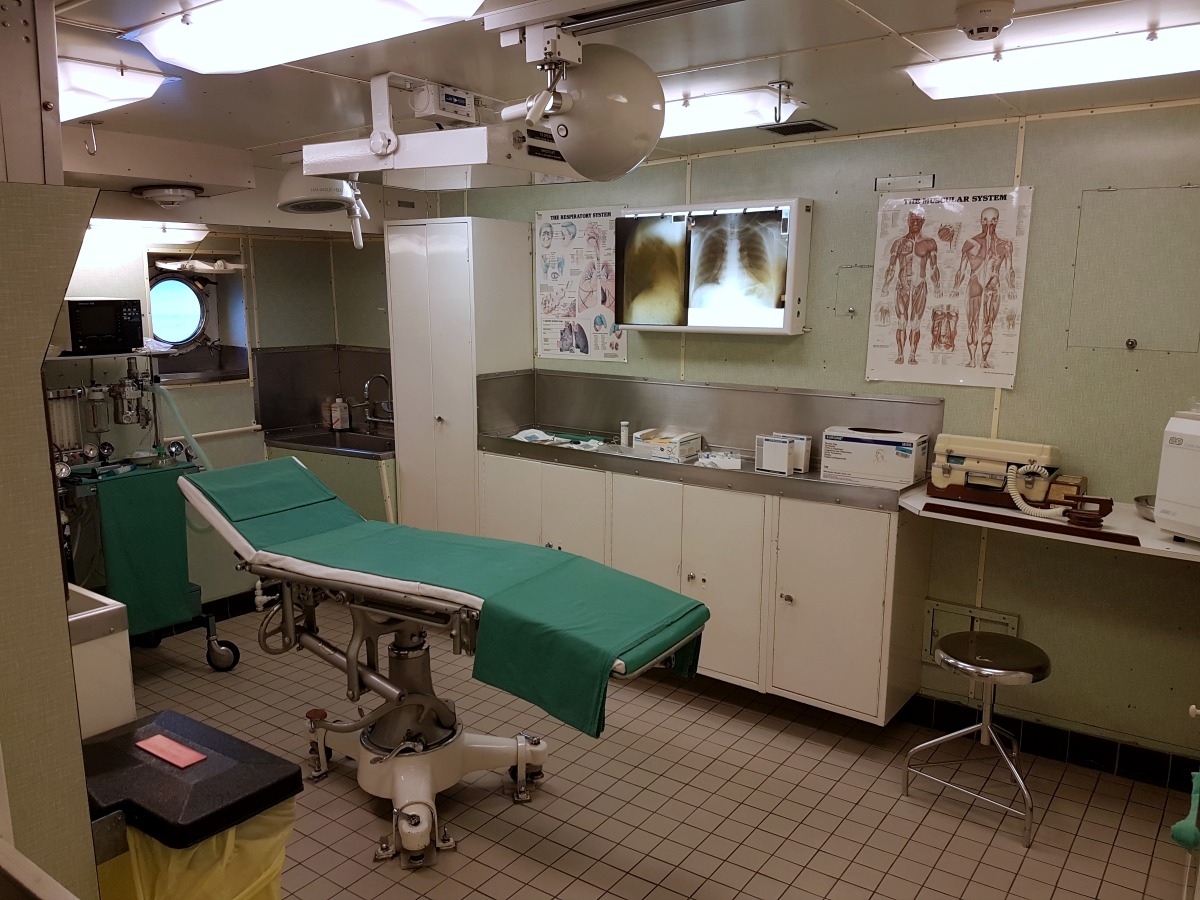 There was also a medical department on board Britannia. This is where the crew, Royal family and any guests would be treated if they became ill. As you can see the operating theatre is very dated and a far cry from what we are used to seeing in our hospitals nowadays. Although it was always staffed by medical professionals, The Queen would always take her own surgeon on board with her. 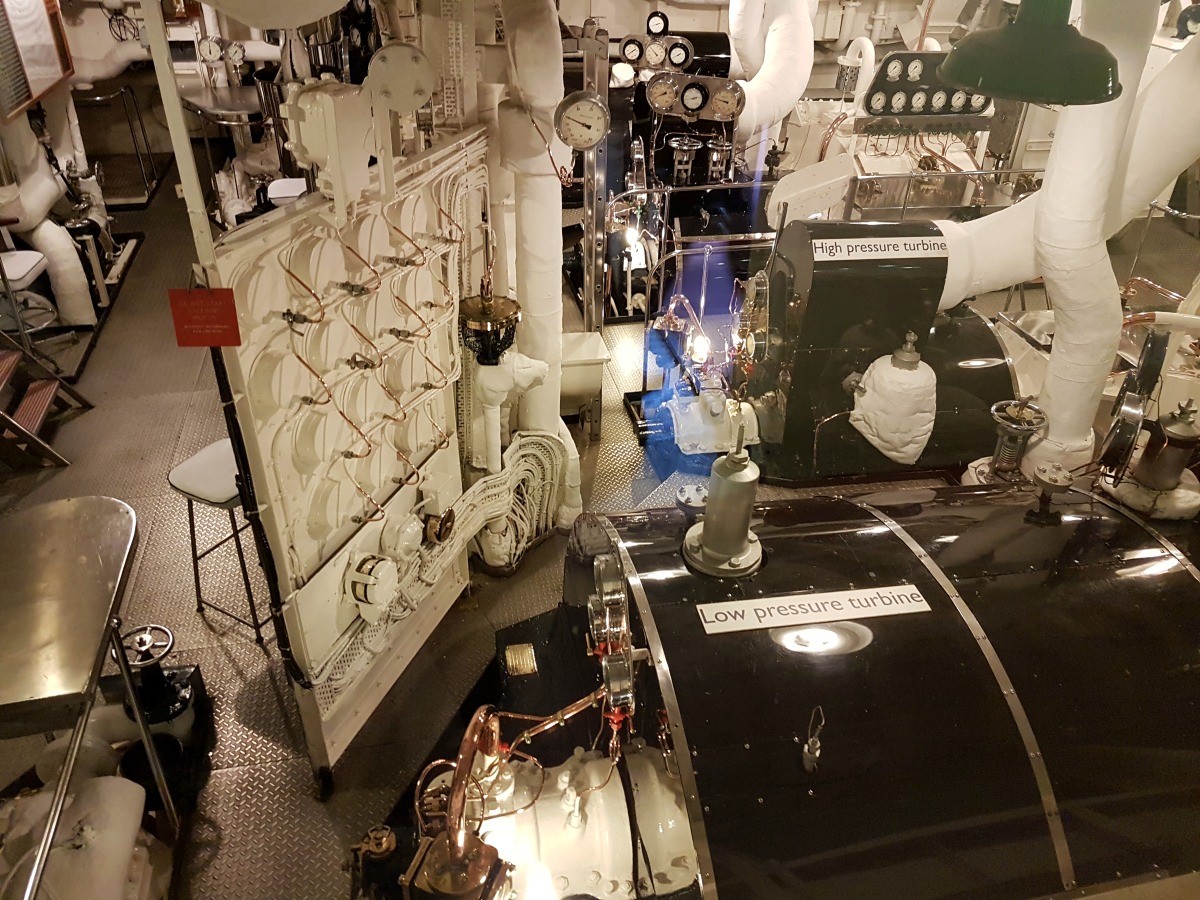 The Engine Room and Royal Sailing Exhibition were the last two stops on our audio tour of HM Royal Britannia.

“The engines steamed over 1 million nautical miles over 40 years with barely a problem. They turned out a total of 12,000 horsepower and drove Britannia and her four-bladed propellers, to a maximum of 22.5 knots.” – The Royal Yacht Britannia.

You imagine an engine room to be grimy, but it was more like a museum piece. It was spotless with the polished brass and chrome pipes and dials sparkling in the light. Britannia was well-known for having a perfect engine room and it’s clear to see why. It was mind-boggling how it all worked, but you could just imagine all the machinery and men working in this room.

There were several accessible toilets throughout the ship. I believe there was one on each level, apart from level 3 (The Bridge). The accessible toilets had everything you’d need, including grab-bars, emergency cord and enough space for a wheelchair user and a carer if required. They were also very clean, which was great.

If you’ve never visited this Royal residence before, then I highly recommend you do. It’s a definite must if you’re visiting Edinburgh. Just make sure you give yourself at least two hours to enjoy the tour and Royal Deck Tea Room. 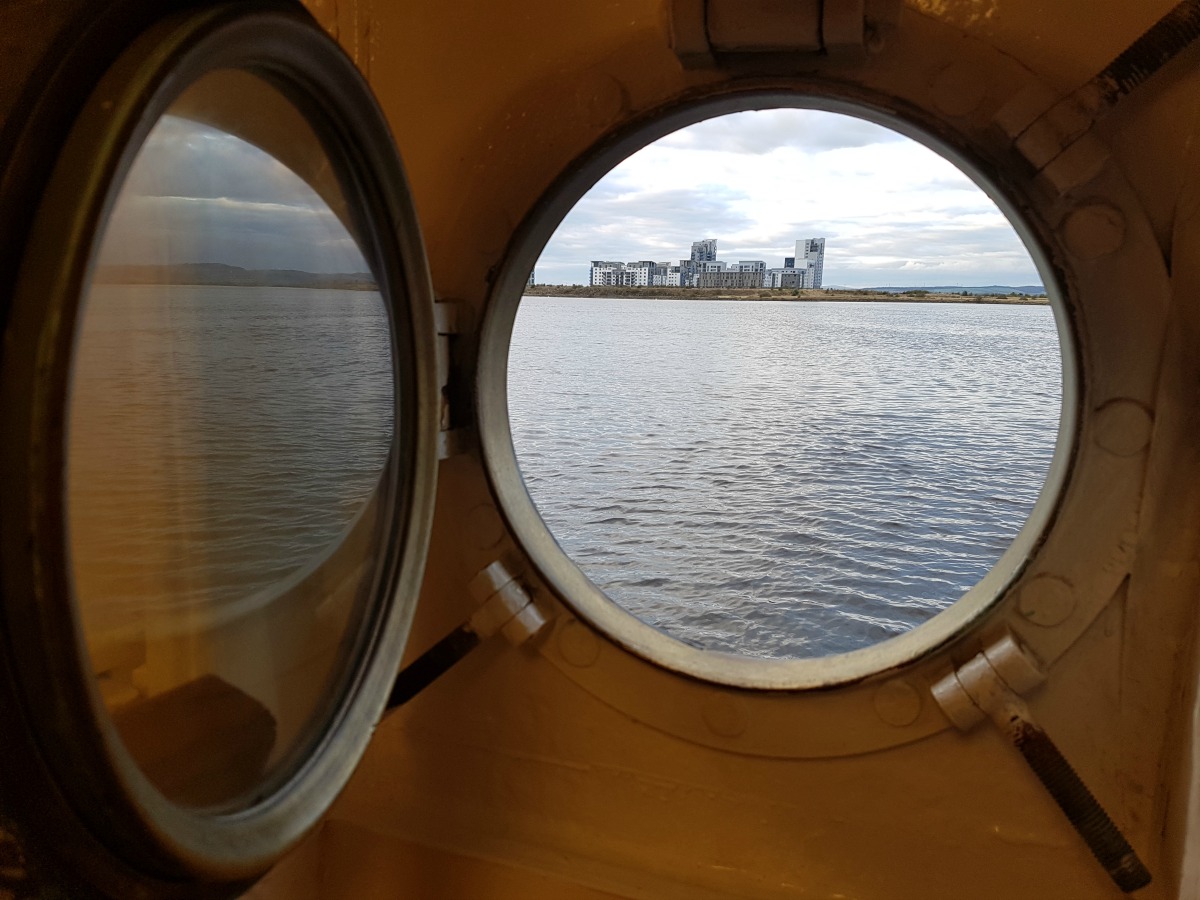 We had a great day exploring The Queen’s floating home, exceeding our expectations for accessibility and enjoyability. Being a fully accessible tourist attraction, I was able to enjoy the whole tour along with my family due to there being no restrictions for wheelchair users. Britannia also has audio handsets for people with visual impairments, tour scripts in Braille as well as tablets with the tour in British Sign Language. Adult tickets are priced at £15 and seniors (aged 60+) at £13.50. Children aged between 5-17 can purchase tickets at £8.50. 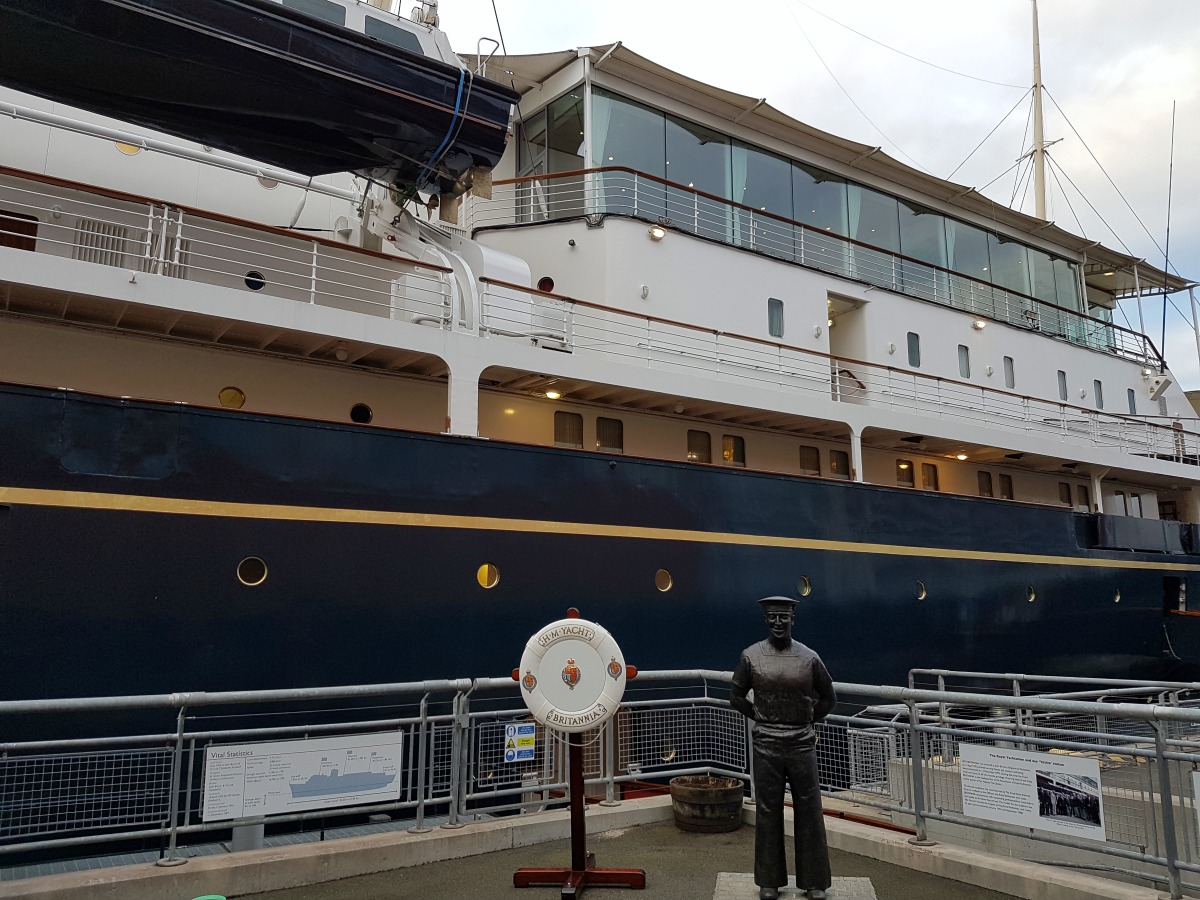 A special thank you to the team at The Royal Yacht Britannia for inviting us along for a fantastic day!

Have you been to The Royal Yacht Britannia?
Is it somewhere you’d like to visit? 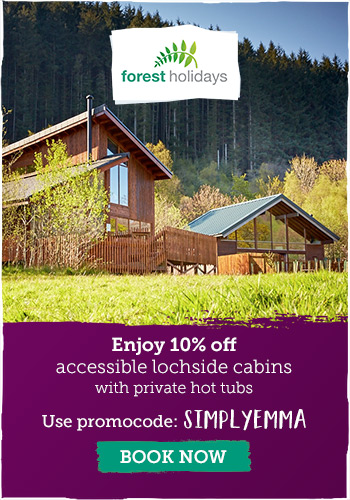 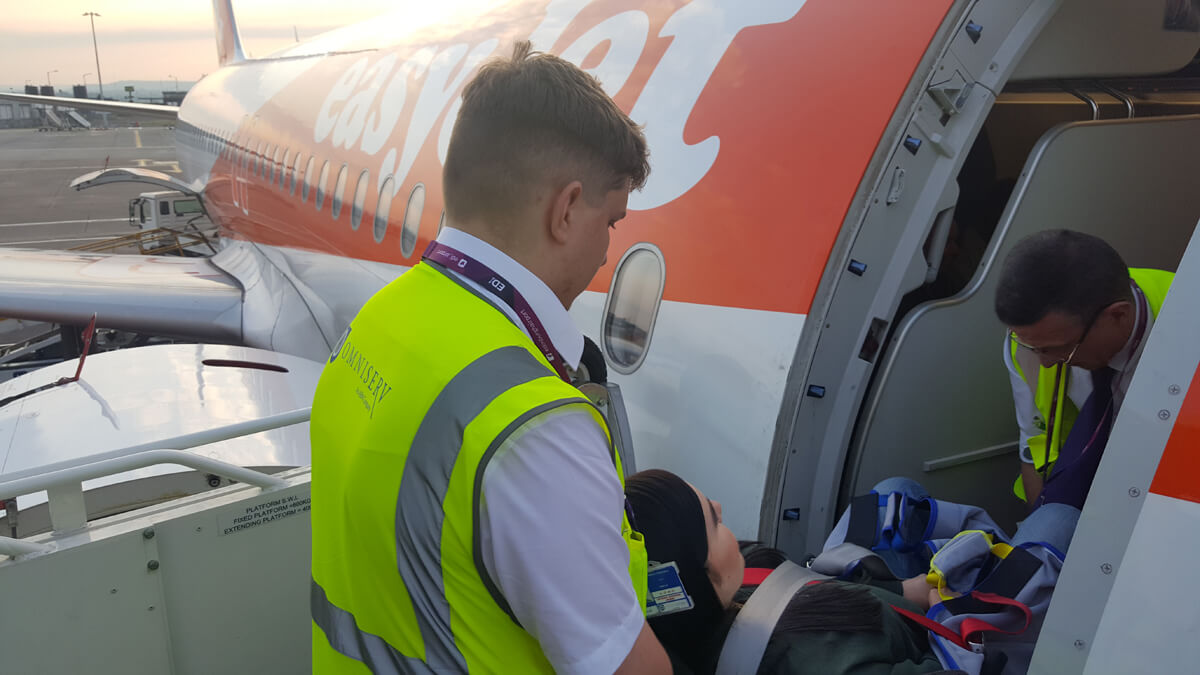 Gigs I’m excited for this year 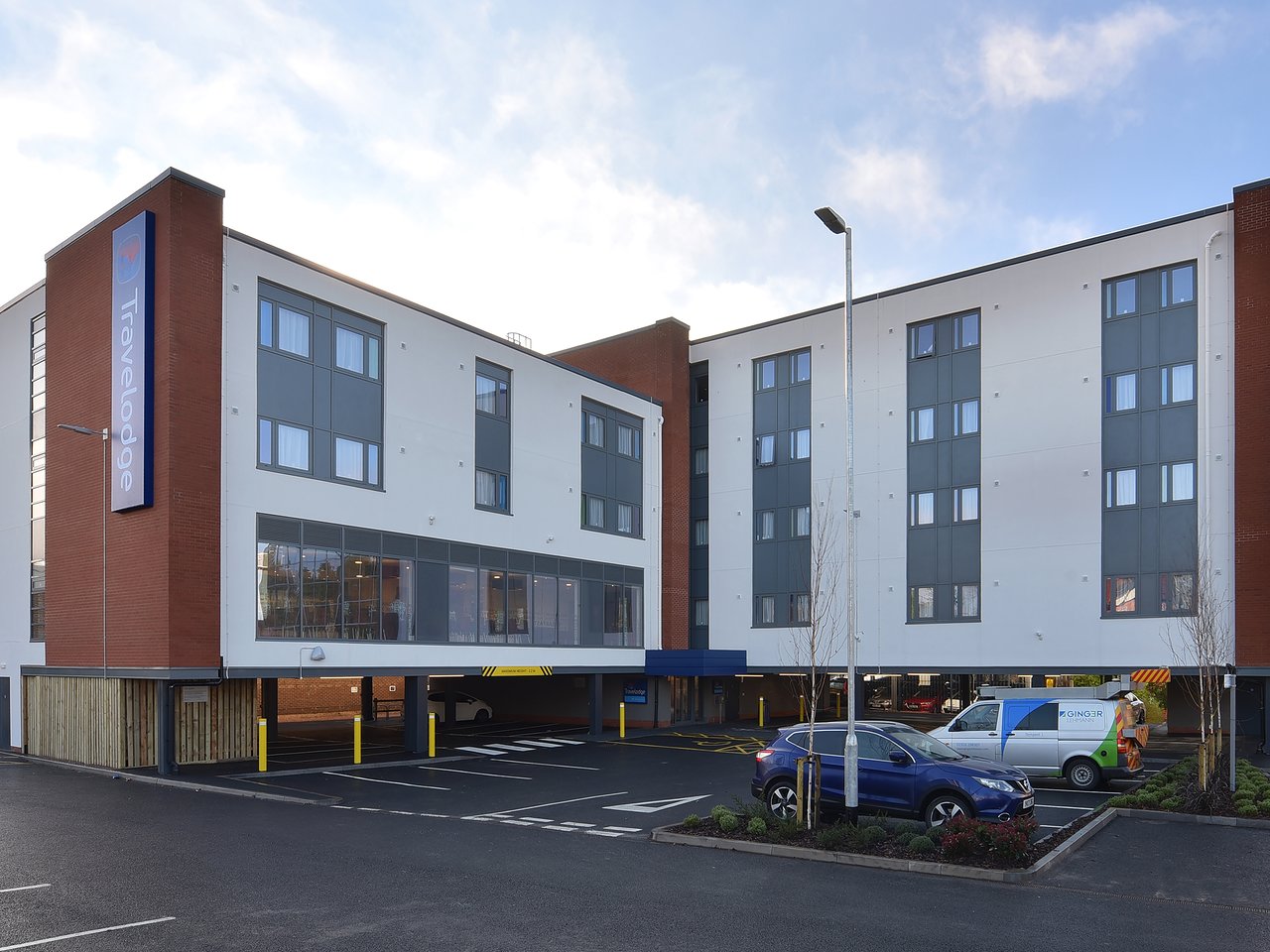 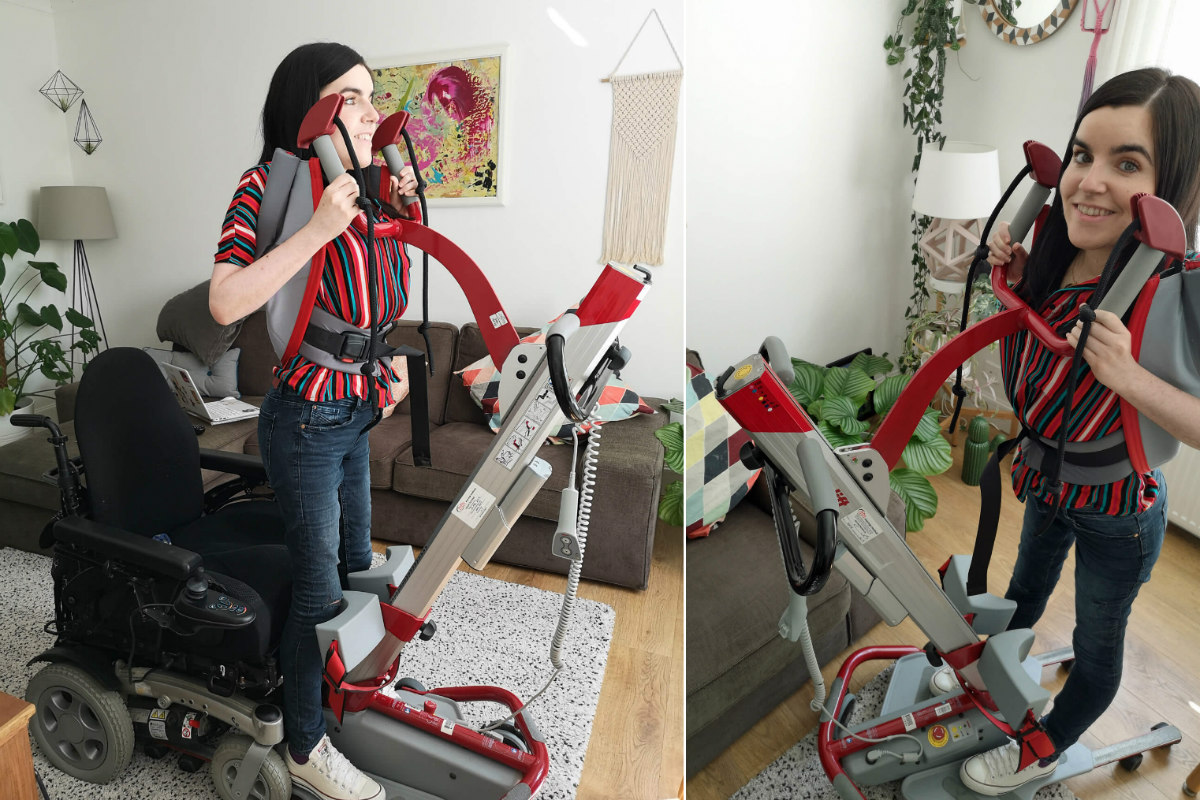